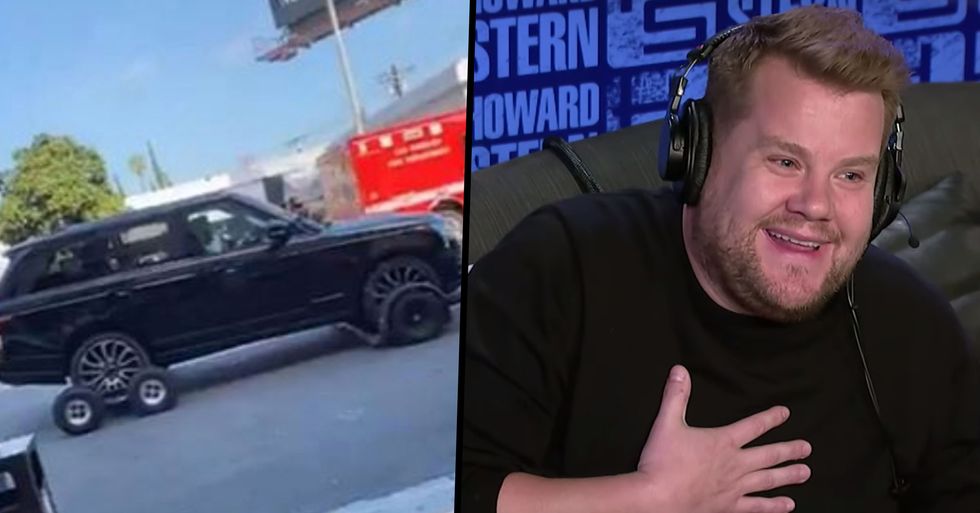 James Corden's Carpool Karaoke is probably one of the most popular celebrity comedy sketches in the world, and fans love it for the incredible line up of guests and Corden's brilliant sense of humor.

But recently, people have realized something completely bizarre and unexpected about the show. Now, Corden himself has finally responded.

Keep scrolling to see what he said. We can't believe this...

Who doesn't know who James Corden is?

The British comedian/actor has become somewhat of a national treasure here in the States and it really isn't hard to see why.

He co-wrote and acted in the hit British sitcom Gavin and Stacey with fellow actress Ruth Jones, and the rest is history!

His bubbly personality landed him many presenting jobs...

And the forty-one-year-old actor is now best known for his hosting the talk show The Late Late Show here in the States.

And after many different hosts taking their turn in the limelight, Corden succeeded Craig Ferguson in 2015, who was the last former host of the show.

And it is thanks to James Corden...

And it was actually inspired by a Gavin and Stacey themed sketch that Corden created for charity back in 2011, in which he sang in a car with British pop-legend George Michael.

The title of the segment pretty much sums up what goes on...

Corden invites a famous guest for a drive around (either in LA or London) and they just chat and sing for the dashcam.

Carpool Karaoke has since become an extremely popular segment of the talk show...

And it is well known for its very impressive line-up of celebrities.

But the best episode had to be the Sir Paul McCartney special in Liverpool...

Now that was something pretty special.

But there's one thing that has always been noticed about Carpool Karaoke...

And that's Corden's very impressive concentration of driving, interviewing, and singing... all at the same time.

That's some pretty good driving there...

So it turns out that Corden has never actually been driving...

And we must say, this is certainly news to us!

Corden is currently filming more episodes for Carpool Karaoke, and his most recent shots were with Justin Bieber in LA.

A fan happened to walk by the iconic Range Rover while Corden was filming...

And it certainly wasn't driving itself.

It turns out that Corden's car is towed by a truck...

And we must say, it now makes a whole lot of sense as to how Corden can multi-task the way he does without crashing his car!

One user wrote, "MY WHOLE LIFE HAS BEEN A LIE," while another said, "All along I used to respect James Corden for being able to concentrate on driving and singing at the same time: but now I feel betrayed."

But many have applauded Corden and his team for the decision to tow the car...

"I mean. He lives up to the name 'carpool' but this would make more sense that he does this instead of actually driving with technical equipment all on the dashboard. So I support it. He’s being safe. Stop trying to slander people just because it’s not what you expected," one user wrote.

But some fans were already a little suspicious...

"I knew it. It is a tad bit impossible for a Brit to drive on U.S roads while singing on top of his lungs! There's just no fooling some people, is there?" one fan wrote.

Here's the clip in question:

Now, Corden has finally spoken out.

And his response has made fans go crazy.

Corden posted a snap to Twitter of himself and Samuel L. Jackson...

The pair were perching on stools and wearing wigs - a nod to Jackson's infamous Pulp Fiction scenes.

Well, who'd have thought it. Of course, fans were quick to reply to the star...

The response was huge.

"No way! I KNEW IT! next thing you know you're gonna tell me it's not the actual artists!" replied another user.

We don't know what to believe anymore.

"James...are you even real?" another user quipped. Keep scrolling to see the "manly day" that Corden spent with the one and only Jason Momoa...