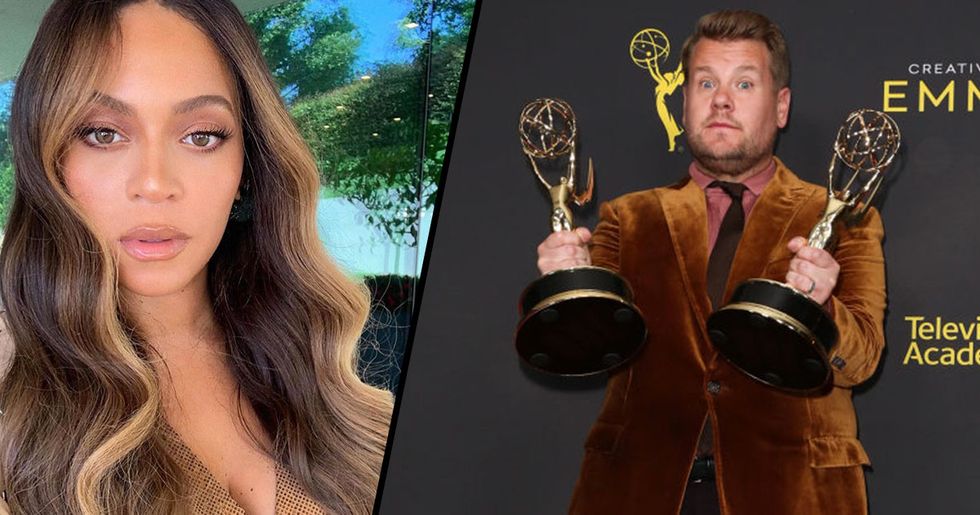 The Emmys are always a pretty huge deal.

The Creative Art Emmy Awards went down last weekend and the event was truly incredible.

But, in typical Emmy fashion, it wasn't short of non-stop drama. There's always some form of outrage over certain Emmy winners and nominees, and, this year, the feud involves Queen Bey and British comedian and actor, James Corden - it's safe to say that fans aren't happy about who won.

The Emmys are one of the most star-studded events of the year.

The recognition of excellence and talent in the television industry has hailed hundreds with awards and praise for their efforts over the years.

The seventy-first Emmy Awards kicked off on Saturday...

It started with the Creative Arts Emmy Awards ceremony at the Microsoft Theatre in downtown Los Angeles.

The technical and acting categories held many deserving winners, but the biggest winners of the weekend combined were HBO's Game of Thrones with 10 Emmys, and HBO's Chernobyl with 7.

Many actors and actresses found themselves in for a night of staggering success.

James Corden, the British actor, comedian, and TV host was among these successes.

Corden is best known here in the States for The Late Late Show.

The forty-one-year-old Brit rose to fame back in 2007, when he co-wrote and starred in BBC sitcom, Gavin and Stacey. Since, Corden has gone on to star in various other comedies and host TV shows which lead him to take over The Late Late Show - one of our countries most popular late-night television shows.

Corden truly shows off his comical talents when hosting the show...

The Late Late Show is pretty much a late-night party, with a range of celebrity guests who take part in comical and musical sketches.

But the show is really famous for...

This boosted the popularity of the show...

"Carpool Karaoke" is a returning segment to The Late Late Show, in which James Corden picks up a range of celebrities (mostly musicians) in his car when driving in either Los Angeles or London. He goes on to host a quick chat show along with singing songs that the celebrity is famous for.

Corden has welcomed some exceptional guests on "Carpool Karaoke..."

This includes Michelle Obama, Will Smith, Jennifer Lopez, Lady Gaga, Brittney Spears, Justin Bieber... and that's not even half of the famous guests that have taken part in the sketch!

"Carpool Karaoke" is a sensation all around the world.

So, to most, it came to no surprise that it gained James Corden 3 Creative Art Emmy awards, with the Outstanding Variety Award going to the "Carpool Karaoke" episode featuring Beatle, Sir Paul McCartney.

Corden's success knocked down a very famous nominee, however...

Beyonce was the runner-up in a range of categories for her documentary, Homecoming, which documented her Coachella performance both onstage and behind the scenes.

Beyonce ended up walking away empty-handed...

Despite her loyal following of world-wide fans presuming that she'd be taking home at least 1 Emmy Award.

They felt that Homecoming deserved the Outstanding Variety Award due to the hard work that Beyonce and her team had dedicated to the performance in comparison to "Carpool Karaoke."

Users voiced that Beyonce nearly died giving birth to twins which, I must point out, thousands of women around the world have also done...

There are also hundreds of other artists who dedicate their entire lives to performing...

There's no doubt that Beyonce put tireless effort into Homecoming, but we mustn't forget other artists who have put blood, sweat, and tears into their work too.

Emmy Awards are handed out with no relevance to race, whatsoever. They are given when an artist has worked hard and has delivered a talented and successful performance so it has to be said that this is a ridiculous accusation.

But it didn't stop there...

One user claimed that Bey lost to "white mediocrity." "Carpool Karaoke" and Homecoming are 2 completely different productions, meaning the decision for the winner won't have been an easy one, so it's highly unlikely that the large group of professionals who decide on who wins is choosing depending on race.

Users began criticizing the techniques used in "Carpool Karaoke" in comparison to Homecoming.

They compared Beyonce's production to the "camera taped to a windshield." Ouch.

But others were quick to retaliate...

"So a man running down some steps should win instead?" they sarcastically wrote in Corden's defense.

James Corden is the final winner, and nothing will change that.

Fans of Beyonce are clearly taking out their frustrations on Corden and, at the end of the day, it has nothing to do with him or his race - nor does it have anything to do with Quee Bey or her race. To learn more about how James Corden is an absolute boss at deflecting the haters, keep scrolling to read of how he responded to "fat-shaming" trolls...