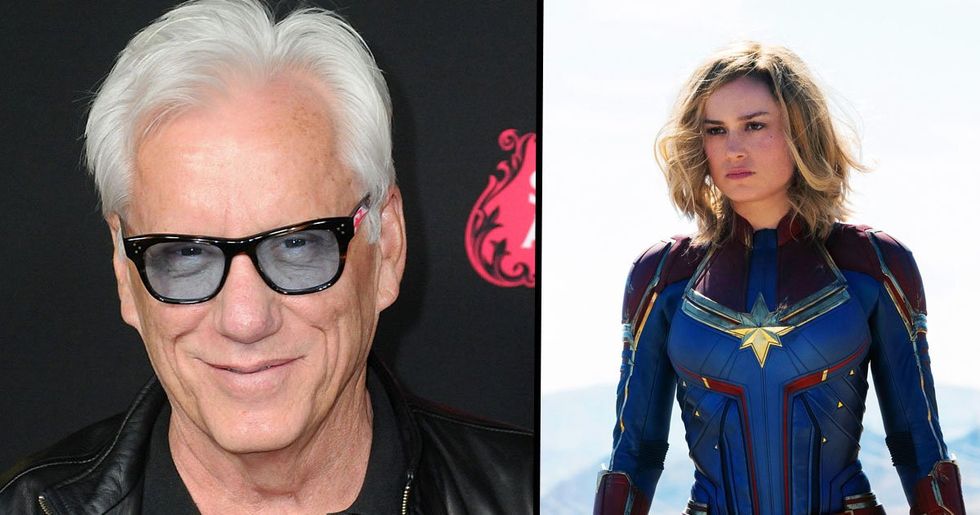 Captain Marvel is currently known as the strong female superhero we have all waited for from Marvel.

But few of us really know how Carol Danvers became Captain Marvel. Turns out, her story is one of the more complicated in the Marvel universe.

In the beginning, she was a regular female human whose main role in the comics was to be the love subject of Mar-Vell, a Kree alien. That was until an accident gave her superpowers similar to his and she became Ms. Marvel.

But only in the twentieth century did the writers decide to give her story a different spin. All for the sake of making her a feminist symbol. That's when Ms. Marvel ceased to exist, and Carol Danvers returned as Captain Marvel.

Marvel's latest movie, starring Brie Larson, has been widely promoted as female-empowering. But this strategy received lots of criticism from film critics, regular movie-goers, and trolls.

And now from James Woods too.

Who is Captain Marvel and how did she come to be the strongest hero in the Marvel universe?

AV Film says the character has been in the comics since the 1960s, and her story is quite complicated.

Captain Marvel was created by Roy Thomas and Gene Colan.

She first appeared in the Marvel Super-Heroes comics in 1968.

In fifty years she's been "a military officer, a fighter pilot, [and] a feminist activist."

She's also "the proud wearer of more distinct superhero identities than any other major hero out of either Marvel or DC."

Captain Marvel, or Carol Danvers, was always overshadowed by Mar-Vell.

Mar-Vell came from an alien race called the Kree that lived on the Hala planet.

Mar-Vell was on a mission to spy on the humans and report back to Krees. However, he eventually fell in love with the planet Earth and its people. So instead of spying on them, he protected them from villains.

Mar-Vell’s bosses back in Kree did not like it.

They were especially unhappy about his relationship with military officer Carol Danvers.

Danvers’ time for the spotlight came when one of these bosses kidnapped her and used the Psyche-Magnetron machine to create a Mandroid weapon.

Mar-Vell came to Danvers' rescue, beating up the Mandroid. But the machine got damaged during the fight.

It "blasted Danvers with Kree energy."

As a result, her DNA merged with Mar-Vell’s, giving her powers similar to his. In the 1990’s comics, Captain Marvel (i.e. Mar-Vell) died of cancer.

Over the past few years, Carol Denvers' character has been redefined.

Her creators made her into a feminist version of Mar-Vell.

She was named Ms. Marvel to emphasize that she was not "Mrs. Marvel or Marvel Girl." She also "advocated for feminist causes in her solo book when she wasn’t doing superhero stuff."

In 2012, writer Kelly Sue DeConnick made it official - Carol Danvers was a huge success among Marvel fans.

So she decided it was time to give her an appropriate superhero name. Ms. Marvel was now Captain Marvel.

She also got a new superhero costume.

It was more similar to Mar-Vell's "red and blue full-body jumpsuit, replacing her old bathing suit and leather boots combo."

In the new Marvel movie, Captain Marvel is played by Brie Larson.

She's "the first female superhero to carry a Marvel film," writes Caryn James, BBC. But "this is not the woman’s empowerment story the orchestrated hype claims."

"It is an action movie shaped by the Marvel cookie cutter, with perfectly adequate but unsurprising special effects," she wrote.

"Larson fits seamlessly into the world of the Avengers, which means leaping into space and sending blue beams of energy from her fists."

James believed the movie would do just fine with Marvel fans, but not with those who are expecting something more.

"Whether she’s Carol Danvers or Captain Marvel, this character is slight."

"So are a lot of other Avengers, but they didn’t set themselves up to deliver more," she added.

"Larson glares a lot, as she should."

"There’s a great meta-moment when a random guy tells Vers to smile, echoing a line that internet trolls have thrown at Larson herself."

"She exudes the look of an actor who takes the part seriously, but any nuance is suppressed by that action-hero straitjacket."

However, James believed that "Captain Marvel takes it for granted that women can be tough and take charge. Carol rediscovers her best friend, Maria (Lashana Lynch), a single mother who is also a first-rate pilot."

But she believes the film still doesn't measure up to Wonder Woman in that department.

The film was a big hit in 2017 because it told a "story of a woman finding power in a man’s world [which] spoke to an audience beyond fans of comics-based movies."

"One element does fulfill the film’s female-empowerment hype," James continued.

"We see how central the heroine was in creating the Avengers team, with a hint at how crucial she may be in Avengers: Endgame."

As for regular movie-goers, Heroic Hollywood says the film became the target of misogynistic trolls.

These trolls have been attacking Captain Marvel and its star Brie Larson since the time she "called for more diversity and inclusivity" during the movie press tour.

First, he replied to a tweet which stated that "white men haters" were not welcome at the screenings with the following tweet.

Then he posted the "Distracted Boyfriend" meme.

He had edited the famous meme to showcase "moviegoers being tempted by Alita and not Brie Larson's" Captain Marvel.

Woods didn't like Larson's comments on the press tour which supported feminism and inclusivity.

That's because he believed Larson's remarks were "attacks on masculinity," CBR reports.

Some people responded to her comments, saying they would rather watch Alita.

They chose Alita because "it doesn't have a political message or a perceived agenda of any kind."

CBR also says Woods has been very outspoken when it comes to the issues Brie Larson stands for.

Had the privilege of seeing #CaptainMarvel last night. My girl @BrieLarson kills it. Get yourself to a theater this… https://t.co/CVdpKS1n1M
— Chadwick Boseman (@Chadwick Boseman)1551833419.0

One Heroic Hollywood reader, TanukiTrooper, made a good point regarding the original "white men haters" tweet.

"The key word there is 'haters' but everyone likes to focus on 'white male.'"

"I'm a white male who does not attack women for standing up for themselves," he wrote.

"I am a white male who didn't hate on Brie for wanting more diversity in the press."

"I am a white male who didn't attack Rotten Tomatoes with dumb reviews," he said, referring to the many negative fake reviews the film has received.

Luckily, the trolls didn't have much effect on the movie's first weeks of screening.

According to CBR, Captain Marvel has done really well at the box office and received lots of positive reviews from film critics. All despite the hate.