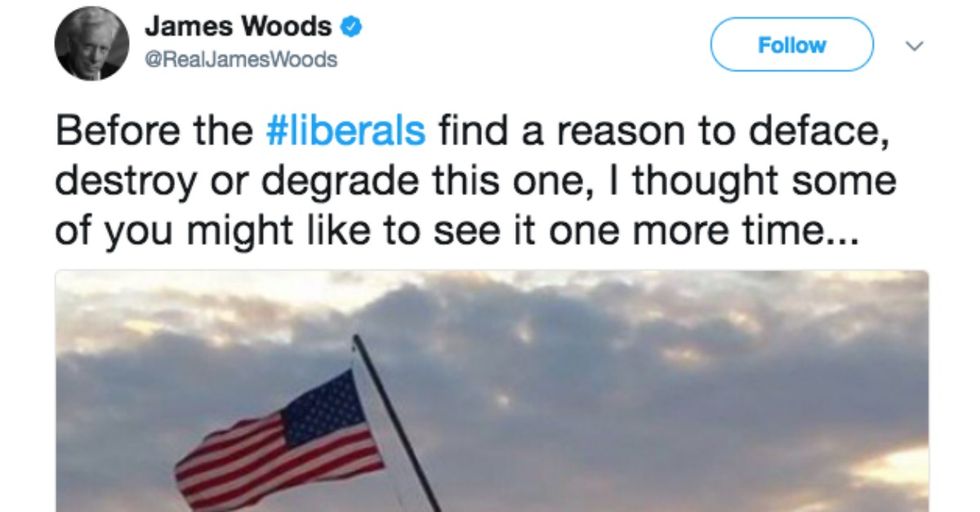 In case you missed it, actor James Woods is a very very outspoken conservative. He's used Twitter before to attack an LGBTQ child, and then he doubled down when actors like Neil Patrick Harris denounced his actions.

The recent domestic terrorist attack and white supremacy rally in Charlottesville, VA led to counter-protesters in Durham, NC ripping down a Confederate statue. This statue, and others like it, are symbols of revisionist history, a denial of the true racist roots of the Confederacy.

Well, Mr. Woods had a strong, strange reaction to this takedown of a chunk of metal. But never fear — Twitter jumped in quickly to shame him, meme him, and point out that all his racist rambling is just nonsense.

It's also known as the Iwo Jima Memorial because it was modeled after a photograph from 1945 of six Marines raising the U.S. flag during the Battle of Iwo Jima in World War II. Woods' caption reads, "Before the #liberals find a reason to deface, destroy or degrade this one, I thought some of you might like to see it one more time..." Uh, what? Does James Woods think "liberals" took down the Confederate memorial because they don't like statues?

They used his exact words but turned them over on themselves by posting corresponding pictures of weird and wonderfully funny statues. Like this fabulous chipmunk.

Liberals can't take away Nicolas Cage. If they take him down, who will save the Declaration of Independence?

If you rip down Olmec from Legends of the Hidden Temple, there will legit be hell to pay from every kid who grew up in the '90s. You do not want to mess with that demographic.

Yes, this may be a whitewashed and incredibly inaccurate wax figure of Beyoncé, but even she doesn't deserve to be brought down by those "nasty" "liberals."

OK, it might not actually be so bad if someone tears down this creepy Jeff Koons statue of Michael Jackson and Bubbles the chimpanzee.

This adorable photo of Robert DeNiro looking way too happy to be holding cat/star, Lil Bub, however, this is a national treasure of epic proportions, one that should be defended from destruction with every ounce of energy Nicolas Cage can muster.

Before those hashtag liberals destroy this one, you must do one thing: Let his cold blue eyes pierce your soul.

To be completely honest, this Bob's Big Boy statue looks heartier and stronger than our president. Plus, who could degrade or destroy a face like that?

The shocked look on the face of this Naomi Campbell wax figure must be in direct response to James Woods' tweet. We know, Naomi. We know.

Whoever tweeted this clearly terrible bust of soccer superstar Cristian Ronaldo...that was a low blow. It's amazing what some people will do to get ahead.

Yes. That is supposed to be Lucille Ball.

You might faint when you see this creepy Colonel Sanders couch. Luckily, it's a couch, so you'll fall right on it.

Buddy Christ gets James Woods' joke. Because it was totally a joke, right? One of those "funny ha ha, I was just kidding, I'd never be actually that crazy" kind of jokes. Right?

Pretty sure "liberals" won't be taking this Trump Chicken down anytime soon. Pretty sure they're the ones who put it up in the first place. Pretty sure.

Now we're getting meta! Keep waving, Woods. Wave yourself right out of relevancy.