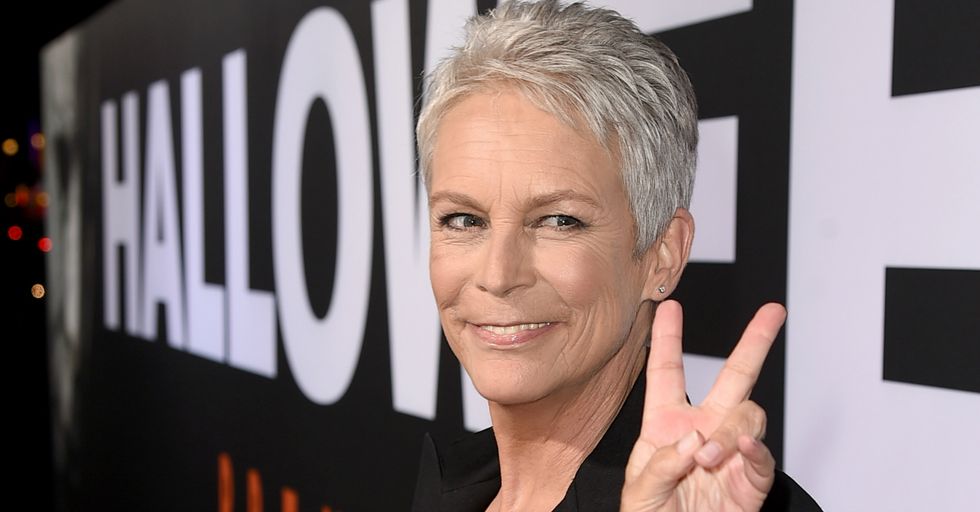 There is so much to be excited about when it comes to the new Halloween movie. If the trailer was any indication, this sequel is going to be absolutely terrifying. Plus, comedian and actor Danny McBride is one of the writers, which is wonderful. Who doesn't love celebrating the spooky season with a reboot of one of the most iconic horror flicks of all time?

I certainly do, and I cannot wait. But the thing I'm most excited about when it comes to this movie is the fact that original scream queen, Jamie Lee Curtis, is back and as fierce as ever. Sure, she's on a mission to kill Michael in the movie, but she's also incredibly awesome in real life.

The actress has no time for Fox News to misrepresent her views on gun control, and she totally put them in their place.

Uhhh, okay? Can someone help Fox News? They're a mess. Curtis spoke up about this ridiculous tweet, calling out the news outlet for trying to say she was being hypocritical.

Curtis explained, "It was just silly because they were trying to make a point without ever asking me what I really think." She continued, "I fully support the Bill of Rights. And fully support the Second Amendment. And have absolutely no problem with people owning firearms if they have been trained, licensed, a background check has been conducted, a pause button has been pushed to give time for that process to take place. And they have to renew their license just like we do with automobiles — which are weapons also."

She also pointed out that she's an actor for hire, playing a character.

You know, because Fox News doesn't seem to understand it. "I’m an actress who's in slasher movies," she told USA Today. "I have to be responsible for my own personal choices in my own personal life. But I am an actor for hire. And honestly, if I had made my career as a pacifist actor, I would never have worked, ever."

Besides slaying it in movies, Curtis also slays it in real life.

I'm so ready to watch her on the big screen. If you're seeing the new Halloween this weekend, here are some facts you should know about the original.

These facts will get you excited for the new movie.

Enjoy reading this list before you walk into the new film!

The role of Laurie became one of Curtis' most famous. She was just 20 when she filmed Halloween.

It only took ten days to write the movie.

Quite the impressive feat! It's no secret that John Carpenter is a talented man, but ten days for an original script is pretty amazing.

Despite being set in Illinois, the movie filmed in Los Angeles.

In some shots, you can see palm trees in the background. Illinois has a lot of things, but it definitely does not have palm trees.

Upon initial release, it made $70 million dollars. It became the most financially successful independent film until The Blair Witch Project.

The film shot in only 20 days.

20 days is a short time to write both the script and film. How did they make a film that revolutionized the horror genre in such a short amount of time?!

Originally, the movie was called "The Babysitter Murders."

Spoiler alert: the babysitters still die, but the title change was huge.

The famous mask wasn't specified in the script.

In the script, the mask description was pretty vague. Who knew Michael's mask would become one of the most famous parts of the movie?

A lot of the characters were named based on real people John Carpenter knew.

He also named some characters after influences. There are tons of Easter eggs in this movie.

Before the Steadicam camera, they used the Panaglide.

In order to get those POV shots in Halloween, a Panaglide camera was used to get that eerie effect.

The character of Dr. Sam Loomis shares the same name as a character from a different horror movie.

How's this for a connection? In Alfred Hitchcock's Psycho, Jamie Lee Curtis' mother, Janet Leigh, played the character of Marion. Marion's boyfriend in the movie is named Sam Loomis. Horror movies are a family affair.

The cast wore their own clothes.

Talk about an indie film budget.

Primarily, Myers was played by Nick Castle (who went on to co-write Carpenter's Escape from New York). But occasionally, Tommy Lee Wallace, the production designer on the film, would step into costume. When Mike Myers' mask is removed at the end of the film, it is Tony Moran who portrays him.

Dennis Quaid almost had a part in the movie.

He was dating one of the actresses in the film, P.J. Soles, who plays Lynda. But the schedule didn't work out, and he wasn't able to be in the movie.

Carpenter and Curtis had a number system for how scared she should be in each scene.

Carpenter would hold up the number and Curtis would know which level of fear she should play with. That's a pretty great system.

The famous Myers house from the film was moved in the '80s.

So if you go looking for it at its original location in Pasadena, you won't find it. But it's still in Pasadena - just in a different part of the city. The house was named a historical landmark.

When they shot the movie, the house had been empty.

An abandoned house makes it even spookier, in my opinion.

The mask was lying in a gutter in the original opening. That mask is always terrifying, even when discarded in a gutter.

John Carpenter did the score for the film by himself.

Not sure if it's possible for the man to be any more talented than he already is? The Halloween theme song is one of the scariest and creepiest scores in a movie.

After the movie had finished, Carpenter still filmed additional scenes.

When Halloween was airing on broadcast television, it needed to fill a two-hour time slot. Carpenter shot new scenes to fill this time.

The opening scene was actually the last one shot.

Since it was quite the complex scene, it took two days to film.

When Laurie (Curtis) falls down the stairs, they threw a camera attached to a bungee cord to get the shot.

Personally, I'd be terrified to chuck a camera off an upper landing but hey! It's all the magic of movie-making!

Carpenter had been inspired by the film "Eyes Without a Face."

Specifically, with the idea of the murderer hiding behind a creepy mask.

The montage at the end of the film was not in the script.

The montage was created in the editing room, to give the audience a feeling that Michael Myers is everywhere. Are you scared yet?

When Bob (Lynda's boyfriend) is killed, the sound used in the film is from a knife stabbing into a watermelon.

I'll never be able to slice open a watermelon the same way again.

A true, midwest horror movie. Share this with the friends you're going to see the new Halloween with!