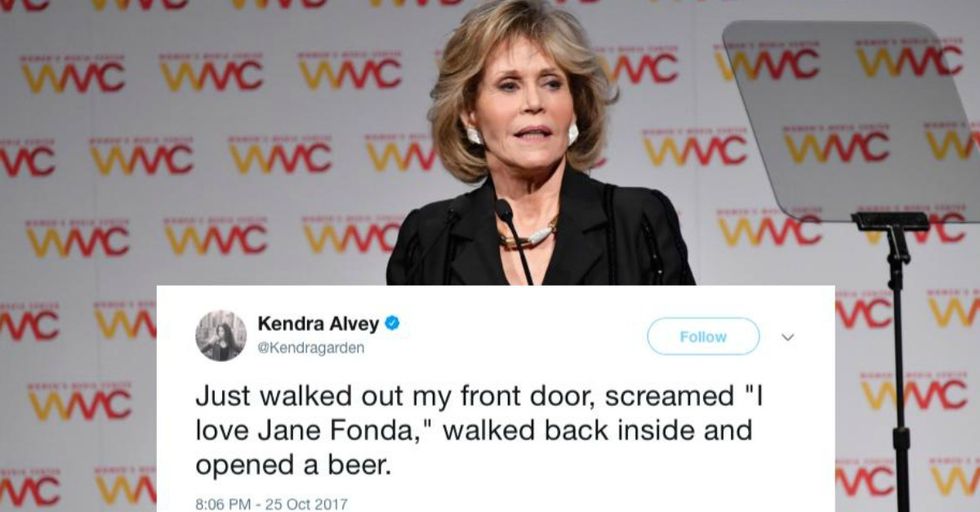 Actress, activist, and philanthropist Jane Fonda has never been afraid of saying what's on her mind. In the 1970s, she was such a fierce proponent of anti-Vietnam War sentiment that she was nicknamed "Hanoi Jane" by the press and castigated by the United States government. A member of the Maryland state legislature even had this to say of her: "I wouldn’t want to kill her, but I wouldn’t mind if you cut her tongue off."

On Wednesday, Fonda and activist Gloria Steinem stopped by MSNBC’s “All In With Chris Hayes" to discuss the Harvey Weinstein scandal.

Weinstein, who has sexually harassed and assaulted at least 58 women (to date), has opened the floodgates of sexual harassment claims across multiple industries and spurred the hashtag #Metoo to trend on social media.

Fonda had a very particular take on the Weinstein scandal and why it blossomed into such a massive media phenomenon.

The allegations became so pervasive, Fonda said, because the victims – excluding Lupita Nyong'o – "are famous and white and everybody knows them."

Fonda explained this to Hayes in greater detail.

"It feels like something has shifted," she said. "It’s too bad that it’s probably because so many of the women that were assaulted by Harvey Weinstein are famous and white and everybody knows them. This has been going on a long time to black women and other women of color and it doesn’t get out quite the same."

While many people celebrated her words, some did not believe her.

Twitter user @davis1988will accused Fonda of playing the race card, which, one, we're not even sure how, considering Fonda is white.

That being said, to put things in perspective, singer R. Kelly was recently accused of by his former girlfriend.

Her accusations are merely the latest in a long history of sexual assault and pedophilia accusations against R. Kelly. Remember, this is a man who married deceased R&B songstress Aaliyah when she was only 15.

The accusations against R. Kelly faded away as they always do, and there's a very good reason why. His victims are all black women.

"I've said it often, and I'm paraphrasing Malcolm X by way of Mark Anthony Neal, a great African-American scholar." Jim DeRogatis, the Chicago journalist who has covered R. Kelly accusations for years said to VOX. "Nobody matters less in society than young black women." What do you think? Was Fonda right in her statements? Or is she grasping at straws?