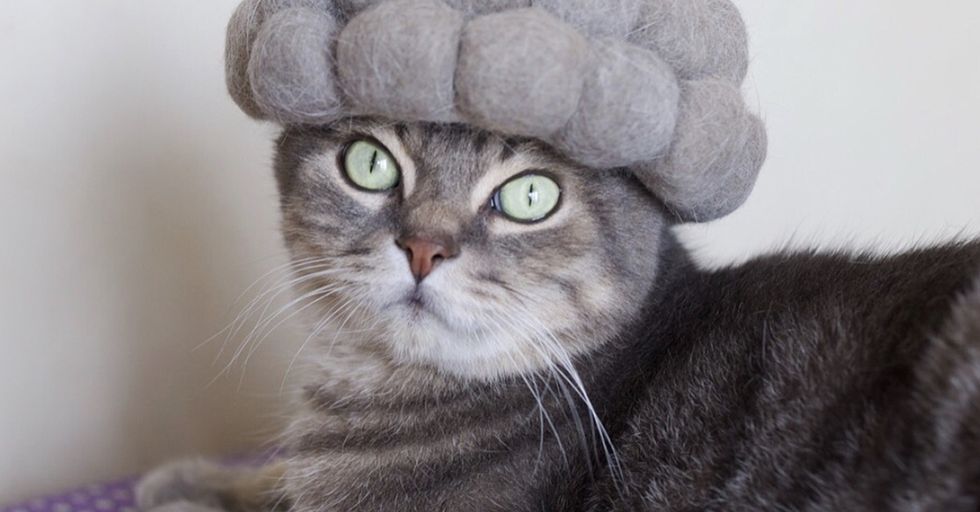 Japanese Artist Makes Hats for Cats out of Their Own Fur

If you have cats, you're probably going to love this.

If you don't have cats, you're probably going to think it's pretty weird...but still impressive!

When it comes to being a cat owner, there are all types of annoying things that you have to deal with. Meowing. Clawing at the furniture. Dumping your water glass off the coffee table. However, while all of these things are pretty irritating, they're far from the most irritating part about having a cat in your life.

That prestigious honor goes to (drumroll, please) all the cat fur! It's everywhere. All the time. It may even haunt your dreams.

But thanks to an artist and photographer duo from Japan, it may not have to anymore! You can actually do something interesting with all of that cat hair! It might get a few confused and/or slightly grossed-out looks, but I think it's totally worth it in the end.

We can all agree that cats are pretty great, right?

There are few things as sweet as seeing a little kitty curled up in a beam of sunlight, or having a cat curled up on your lap, purring with contentment.

But it's not all sunshine and purring.

For one thing, there's the fact that you have to interact pretty regularly with their poop. Now, granted, owning any type of pet usually comes with some poop duty. But it's not like it's a fun time.

You may also have to deal with claws.

Whether they're making biscuits on your lap or have simply decided that your brand new couch is their new scratching post, the claws can be a real pain. Sometimes literally.

And some cats are just straight-up assholes.

I don't currently have a cat. I haven't had a cat for more than 10 years. And yet, I've seen more cat buttholes than I think anyone should probably have to see in a lifetime.

And then there's the fur.

Unless you have one of those hairless Sphynx cats, you have to deal with fur on a daily basis. Maybe even on an hourly basis.

If you have a cat and you claim to have never had cat hair in your mouth, you're lying. It's basically another seasoning.

Most people throw the hair their cats shed away in the garbage.

Which makes sense. It's not like you're going to use it for anything, right? Well, that's where you're wrong.

Today, I'm going to present a new idea for you to ponder.

Rather than throwing your cat's discarded hair away in the garbage...

...You could use it to make a hat for your cat!

Yes, you read that right. No, I'm not kidding.

But I understand if you're confused.

And, yes, maybe even a little grossed out. But hear me out, here. Thanks to Instagram users @rojiman and @umatan, making cat hair hats for your cats is not just a viable option; it's also pretty stylish.

These are the cats in question.

From left to right, their names are Nya, Mugi, and Maru. They're also some of the luckiest cats on the planet.

Why? Because they get to wear handmade hats!

The hats are made by umatan out of fur that the cats shed. The first hats they made were somewhat basic in shape, like this heart one they made for Valentine's day.

But the hats quickly became more and more complex.

Check out the detail on this seashell hat made out of cat fur! (There's a sentence I never thought I would write.)

Umatan makes the hats, and photographer Rojiman takes the photos. Obviously, both people are very skilled. And the cats are natural models.

This one is designed to look like a bunch of grapes!

I wonder where they get their ideas for all the different hat designs. I also wonder whether the cats have a giant closet full of cat hair hats. I'm going to pretend that they do because it makes me happy to imagine it.

I love how you can clearly see the hats are made with fur from each of the three cats. Nya provides the gray fur, Maru the white, and Mugi the brown!

OK, this is the cutest thing I have ever seen:

I would trust this cat to fly me anywhere in the world. The little pilot hat fills me with a lot of confidence.

Here's a video of the process:

It looks like Umatan uses the process of needle felting, which basically entails poking a bunch of hair with a tiny needle until it becomes matted and moldable. It's a pretty simple idea, but as you can see, the results are anything but.

Umatan doesn't limit themselves to hats, either.

Here you can see a tray of desserts made from cat hair. You probably don't want to eat them. Unless you really like hairballs!

And here's some sushi!

Again, not for eating. (It does look oddly delicious, though, doesn't it?)

You could even make a flower for your true love!

Ideally, your true love will also love cats. Otherwise, this would be a very very weird gift.

Here's a cat made out of cat hair!

Honestly, I'm beyond impressed with the work of these artists.

Not to the point where I want to wear a hat made out of cat hair... But I would consider putting one on my dog.

There's actually a book that tells you how to make your own cat hair crafts!

It's called Crafting with Cat Hair and I can tell you with complete confidence that it is not meant as a joke. Cat people are just special kinds of people.

You could use your cat's hair to make a portrait:

Or you could make a Christmas ornament.

What a lovely reminder of your furry friend! (Although this probably won't discourage your cat from attacking the tree.)

Or you could create a finger puppet.

Imagine all the fun skits you could put on with your real cat and your finger puppet cat. That is, assuming that your real cat is willing to cooperate.

Or you could make some hair clips!

And bring a little bit of your cat with you wherever you go. I guess the possibilities are pretty much endless.

And someday, you might even be as good as Rojiman and Umatan.