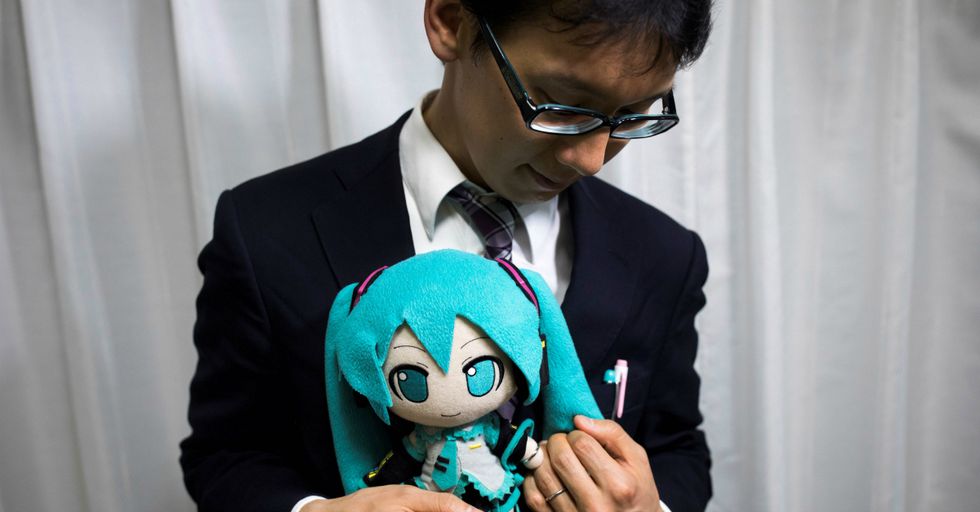 We all know that nothing can get in the way of true love– even if it means a man marrying a hologram. Yes, a hologram.

Nothing seemed to stop this Japanese man from love, especially not the laws of virtual reality. Akihiko Kondo married a holographic character who has stolen his heart and redefined his definition of love and commitment. That fear that we all had of robots replacing our jobs has now infiltrated into our dating relationships. If you can't find your love on Tinder, try diving into the virtual reality world. You might find your soul mate.

It's 2018 people, anything is possible. If you want to marry a hologram, go right ahead.

Akihiko is a 35-year-old school administrator in Japan. He's your average man, who lives a normal life, and has always looked for love.

Hatsune is an animated character that was released in 2007. She's a 16-year-old girl with Sailor Moon-like hair and a beautiful singing voice. She is deeply loved by fans all around the world– and has even appeared on stage at concerts by way of holographic technology. She's a pretty big deal.

Every couple has a "how we met" story.

Akihiko and Hatsune have one that's very similar to a lot of others in our generation; they met online.

Akihiko has been a huge fan of Hatsune and has, throughout the last decade, fallen in love with her.

He decided he wanted to make their love official by hosting a wedding. An engagement was not necessary; he assumed she would say yes.

Akihiko spared no expense for his wedding day...

He spent two million yen, which is about $17,800 American dollars. Nothing was too special for his virtual boo, who took the form of a stuffed doll, for the sake of the ceremony.

Over 40 people showed up to support the new couple as they performed their vows.

Akihiko sported a wedding ring and had one specially made for his new wife. The doll was dressed in white, as was Akihiko.

Although Akihiko had a good amount of people at his wedding, his immediate family did not attend.

He invited his mother but she did not want to attend her only son's wedding. "For mother, it wasn't something to celebrate," Akihiko said in an interview.

Although some people don't approve of this relationship, Akihiko is still madly in love and as happy as ever.

"I've always been in love with Miku-san," he said, "I've been thinking about her every day."

Som people have questions for the newlyweds...

Hatsune is a well-known anime singing character, so some people seemed to be confused as to how he could marry someone that technically, everyone has access to. How could she be his wife when the whole world also shares their love for this animated character?

Akihiko owns a $2,800 desktop device where his own personal version of Hatsune lives.

She appears as a tiny hologram that speaks to him, which you can see in the video above. "I'm in love with the whole concept of Hatsune Miku but I got married to the Miku of my house," he said, further explaining his unique relationship.

It feels like a real-life version of the movie "Her" where the main character falls in love with a Siri like technology.

The storyline seemed outlandish initially, but now, it is not such a far-fetched idea.

Hatsune wakes up her husband in the morning and welcomes him when he comes home from work.

He can let her know through his cell phone when he's coming home, and she will have the lights on waiting for him like a real spouse.

Akihiko sleeps next to a doll version of Hatsune, the same one who stood with him at the altar.

She sports still her wedding band around her wrist since she doesn't have fingers.

Akihiko says he is faithful and has no desire to marry a "3D woman" in the future, meaning that humans aren't his type at all.

He loves that his new wife will never die or age."I'm not seeking these in real women. It's impossible," Akihiko declared. But what if the computer dies? Is that considered death?

Many women have mocked Akihiko because of his decision to marry Hatsune.

He recalls negative memories when girls would tell him to "Drop dead, creepy otaku!," which is a demeaning phrase in Japanese, calling him a loser or a geek.

He has had other negative experiences with women prior to his marriage, in the real world.

Akihiko said women bullied him so much that it led him to have a nervous breakdown, and he decided he never wanted to marry a real woman.

After hearing how awful women have been to Akihiko, it makes sense why he would find comfort in marrying a hologram.

Our poor guy wants love– and he deserves it! No matter how real his wife may be.

Akihiko is calling for people to embrace all kinds of love, even if it doesn't make sense to you.

He's happy and it sounds like all he wants is for others to be happy for him.

The status quo seems to be completely obliterated and Akihiko is living proof that normal is overrated. "Diversity in society has been long called for," Akihiko said proudly.

Even though the marriage doesn't have any legal standing, that doesn't matter to the happy couple.

"It won't necessarily make you happy to be bound to the 'template' of happiness in which a man and woman marry and bear children,"  he stated.

Gatebox, the company that produces the Hatsune hologram, gave Akihiko a marriage certificate, calling it a love "beyond dimensions."

They have no problem with their fans wanting to marry their creations and they give certificates to show their approval and support.

But this isn't the first marriage certificate Gatebox has given out.

In fact, they've issued over 3,700 certificates that they consider "cross-dimensional" marriages.

So almost 3,700 people are happily married to a hologram but I can't get a text back? What kind of world do we live in?

A lot of absolutely insane things have happened this year, so this might not be the craziest thing we've heard in 2018.

This is sad, but it's also very true.

The overall response on Twitter was shock amongst some people mocking Akihiko for his decision to marry Hatsune.

Many people couldn't understand why he would marry a hologram. Haters will hate, as they always do.

Some people stan for this love!

Although there were some pretty harsh responses on Twitter, there was the occasional hopeful encouragement for the newlyweds.

"It's simply not right, it's as if you were trying to talk a gay man into dating a woman, or a lesbian into a relationship with a man," Akihiko said. He has a point!

Akihiko wants to encourage others to come out of their closets and to not be afraid to share their cross-dimensional love stories.

"There must be some people who can't come forward and say they want to hold a wedding," he said in an interview. "I want to give them a supportive push."

You might think all of this is crazy, but it's hard to not support Akihiko for his bravery, boldness and all his puppy love.

Sure, it's not every day you hear of a man marry a hologram, but if he's happy then more power to him!

We're wishing for the best between Hatsune and Akihiko.

Having to go through a cross-dimensional divorce sounds pretty messy. Share this hilarious story with your friends and family!