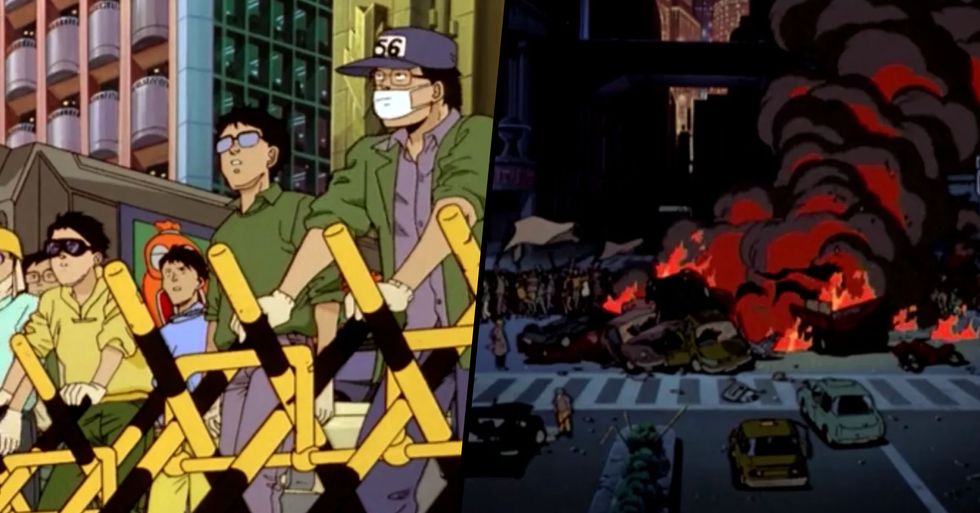 Japanese Movie 'Predicted' the Chaos of 2020

A 1988 Japanese movie has recently gained viral attention for it's eerie similarities to the bleak events of 2020, and people are convinced that it predicted every bit of chaos...

From apocalyptical bush fires to a full-blown global pandemic - it seems that things really can't much worse from here.

Australia was on fire, our favorite celebrities started dying left, right, and center...

And, just to top it off, COVID-19 plagued the planet, shutting down all major countries and cities for months on end.

These events have been completely unprecedented...

And, putting the wild conspiracists to one side, the majority of us didn't see any of it coming.

But it turns out that one movie may have already predicted a lot of these bleak events.

The Japanese Anime movie, Akira has gained viral attention recently for it's remarkable similarities to the events of 2020.

And it tells the tale of Shōtarō Kaneda, a leader of a biker gang whose childhood friend, Tetsuo Shima, acquires incredible telekinetic abilities after a motorcycle accident.

The city of futuristic Neo-Tokyo had been wiped out in an apparent nuclear blast in 1988...

Subsequently plunging the planet into another devastating World War.

It is widely regarded as the most influential anime and sci-fi films of all time...

And creators of sci-fi shows and movies such as Stranger Things and The Matrix have credited the movie for their inspiration.

Akira has gained a loyal fan base over the years...

And, this year, many have been rewatching the movie and noticing a few peculiar coincidences.

Okay, the storyline is a little far fetched, I have to admit.

But there are some seriously spooky similarities to the real world we're currently living in today.

The movie made significant hints about the postponed 2020 Tokyo Olympics.

The 2020 Olympic Games are a recurring theme throughout the movie...

The Olympics are due to take place in 2020, a symbol of Neo-Tokyo’s recovery after the war-stricken traumas it had once faced.

But they were postponed as a result of the COVID-19 pandemic.

And, of course, eagle-eyed fans couldn’t help but notice one thing.

There's a scene in the film where "Just cancel it!" had been painted underneath a countdown clock that showed 147 days until the Olympics began. Many fans are noting this to be a prediction of the real-life postponing. What do you think?

There are also references to the ongoing tensions happening across the world regarding police brutality.

In the movie, a steadily growing protest is happening at the same time as the biker duel, with a quick glimpse of a TV news report mentioning that a "skirmish has broken out between student protestors and riot police."

Some of the scenes are uncanny.

The protestors are seen flipping over militaristic police vehicles, while - in a moment of dark humor that is darker and a little less humorous now - a riot cop launches a tear gas canister directly into someone’s chest.

In Akira, the protests are over tax reforms...

While here in the real world, they are about the ongoing police brutality and racial injustice happening all over the world.

However, let's not forget that our rich people are making out pretty well, too.

Let's remember that billionaires have made billions more over the course of the pandemic while millions of Americans have lost their jobs, a theme that is resounded in Akira's protests.

Did Akira really predict the chaos of 2020, or is this simply another wild conspiracy? This isn't the first time eerie predictions have happened in cartoons, however. Keep reading to see all the times The Simpsons predicted future events with scary accuracy...