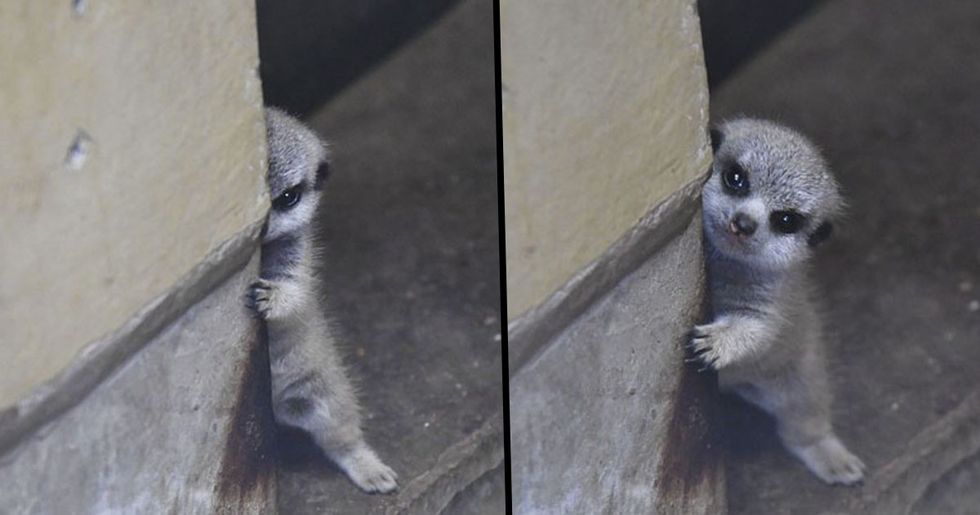 Nature provides us with a lot of amazing things. From the beauty of wild beasts to breathtaking landscapes, each intricate detail renders us speechless.

One Japanese photographer probably has one of the best jobs on the planet: taking photos of baby animals. On a trip to the Inokashira Natural Cultural Park in Musashino City, Tokyo, she managed to capture some rare shots of a meerkat family. They were shy at first, but once they realized that the camera was not a threat, the animals easily warmed up to the idea of being in the spotlight.

The images captured them in their most playful state and I must admit, I didn't know that meerkats could be so darn cute! Have a look for yourselves!

The series starts with these four photos...

And it only gets better after each shot.

The images captured the hearts of thousands of @mamekoro51's followers.

They received over 378 thousand likes in a matter of days!

It's almost as if the meerkat was thinking about the pros and cons of having its picture taken.

And, in the end, the pros must have outweighed the cons, because it pops half of its little face out...

And then we get to see the full thing!

He starts running around the area...

We can't help but gush over this little guy...

People love it so much that they've created their own fan art, which you can find all over Twitter.

People are getting creative with their own renditions of these meerkats.

They've even got their own fan club...

These shots capture him eating and playing around with his family.

And they only keep getting cuter and cuter!

@kikyo2018 referred to this meerkat as a criminal because he "knows his cuteness!" We totally agree!

At one point he even curled into a ball, shying away from the lens again!

Can someone arrest this meerkat already?

Okay, I take that back.

Let him continue being extremely cute! We can't get enough of him!

And look at these photographs of him with his family!

A quick cuddle before posing for the camera again.

Someone even asked the question: "Is he real?"

@neigeRIZUMU questioned if this meerkat and his family were merely stuffed animals...

And just before someone told them to shut up and just enjoy the pictures...

They admitted that they just seemed "too cute" to even exist! We'll let you off with that one then.

Hold onto your hats, ladies and gentlemen...

It's only going to get more adorable!

Capturing these divine creatures in such an intimate habitat makes the images feel so raw.

That's the beauty behind all of these shots.

This little fella picked the comfiest spot to take a quick nap!

Who needs a pillow?

Meerkats are generally playful animals, as you can probably see...

But when anything poses a threat to their pups, they're instantly in attack mode.

I wouldn't want to make a parent meerkat upset...

Because they can be pretty vicious. They have been known to kill their own family members' offspring, just so they can increase the survival rate of their own.

But, from these images, I would have never expected them to be so violent!

Look at the way they're always cuddling each other!

Meerkats originate in desert climates, with their ancestorial roots stretching all the way to South Africa, which is over fourteen thousand kilometers from where this particular family resides.

So it's no wonder that they're always cuddling each other!

Gotta get that warmth somehow, right?

They also spend their time being taught how to survive in the wild.

Their parents will teach them crucial survival techniques so that they're able to hunt on their own one day.

And the skills are pretty cool, if I do say so myself!

Parents have been known to teach their pups how to deal with venomous animals, so, if they do come into contact with them, they know how to kill and clean the creature.

This includes scorpions and snakes!

Yes, those cute little meerkats know how to eat dangerous wild creatures and their size doesn't usually matter because they're prepped with the skills to deal with them all.

After they've learned everything that they need to learn, they're allowed to be free.

From the age of two to three weeks old, they're pushed to find their own feet in the big wide world. Imagine that - fending for yourself at two weeks old??? No thank you.

These photographs have changed my mind about meerkats.

They're possibly the cutest creatures to ever walk the planet, next to baby koalas, of course.

And, if you disagree, you're crazy.

I said what I said. Look at his little face!

And that's all I have for now, folks!

If you just can't seem to get enough of nature and its amazing feats, then keep scrolling because I have the perfect read for you which includes some of nature's most incredible accidents... prepare yourselves for this one.