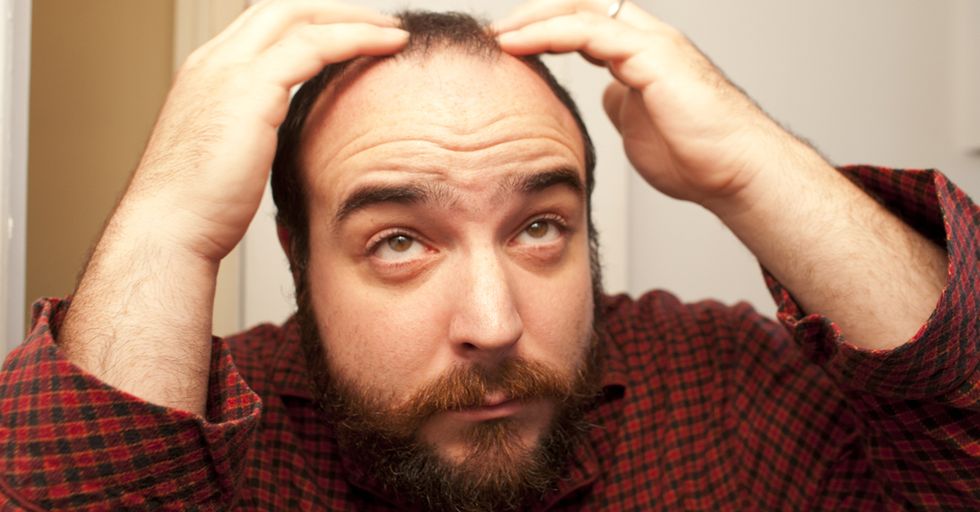 There's no more of a bone-chilling moment in a man's life than when he first notices that his hairline is receding. It signifies the beginning of the end of so much in their lives — the end of their youth, the end of their virility, the end of their ability to casually run their fingers through their hair and look all sexy after they take off their motorcycle helmet...

But now, for all the current and future bald-headed men out there, there is hope. And that hope comes, surprisingly, from a drive-thru window.

A team of researchers in Japan have published a new study that implies, against all odds, that an ingredient in McDonald's french fries could be a key component in reversing male pattern baldness. Will men at risk of baldness be able to point to this surprising revelation as a reason to get large fries instead of medium from this point onwards?

Baldness is hard to deal with.

It's completely out of guys' control.

Men like to feel like they're in control, like they can handle whatever problem is put before them. But with baldness, all they can do is shrug their shoulders and let it happen.

And it can be embarrassing.

Many men report being unable to watch The Bachelorette once they start to go bald as they can't stop envisioning themselves being kicked off the show, while the rest of the contestants are getting together with the titular bachelorette, laughing about them.

Baldness can even cause depression.

Since so many men have their self-esteem tied up in their physical appearance, it's no wonder that thinning hair can cause them to lose faith in themselves and become depressed.

And toupees are a problem.

While baldness can happen to men in any economic situation, it is only the rich who can afford a toupee that can pass as real hair. Wow, money — is there any problem that it can't solve?

Hair transplants are a risky business.

At first I thought, wow there’s a lot of people who’ve had brain surgery wandering around Istanbul. But then after… https://t.co/Mjc0gq1Ye2
— Fionn Davenport (@Fionn Davenport)1558173146.0

Some men are having hair straight up implanted into their heads to remedy baldness. Immediately after the operation, their heads are always filled with bloody red scalp dots and it looks so painful.

Baseball caps are a popular choice.

Ah, the baseball cap — the first, and the best, way to cover thinning hair. This is for the man not ready to admit that his hair is going, and who is also not ready to put any effort into deception.

It's clear that there is no length that men won't go to to keep their hair.

There's an old hypothetical question that's fun to ask friends at cocktail parties: If you were offered a million dollars to press a button, but you knew that pushing that button would kill one random person somewhere out in the world, would you do it? If a man losing his hair was made the same deal, but for a full head of hair instead of a million dollars, they'd jam on that button like they were playing Street Fighter II for the first time against their older brother.

Even the men with hair look at all of their sad, balding friends, hoping that, someday, baldness will be a thing of the past.

And some Japanese researchers may have found the cure.

A team working at Yokohama National University has published a report suggesting they have created a process that "may lead to a new treatment for hair loss."

And they definitely made that discovery during a work lunch after a fifteen-minute meeting when no one could decide where to go.

Let's be honest — when Jerry from HR wants Thai, Bianca from Accounting wants sushi and Terry, the intern, will do whatever so long as it's not that hot dog place, we've all gotten frustrated and said, "Fine! We'll just do fast food again!".

The chemical comes from McDonald's.

That's right, McDonald's may be ready to make its second enormous contribution to the health and well-being of humanity (its first, of course, being the McChicken).

Good thing it's in the fries. If it was in the ice cream, no one would ever know because the machine's always broken.

The chemical is called dimethylpolysiloxane.

Used to "keep the hot oil from foaming and boiling over and potentially burning our crew members," dimethylpolysiloxane is also found in hair conditioner and nail polish. (And the fact that it's in the french fries we eat? Not a great look for McDonald's.)

Officially, it's very strange that, instead of asking their employees to gently slide the fries into the oil, they add a weird chemical.

I've never worked a fryer before, but it does seem like you could ease the fries into the oil without it bubbling over, right? Or maybe make the oil troughs deeper? It just feels like there were a lot of other solutions to this problem.

But McDonald's just toss in a chemical.

Maybe this is how McDonald's solves all of its problems. One member of the McDonald's board acting out? Just toss a little chemical in his coffee. Just kidding. They don't do that.

McDonald's has admitted to adding dimethylpolysiloxane to their food.

In an amusing Q&A segment on their website, McDonald's takes questions from its fans and did admit to using dimethylpolysiloxane in its oil. But why does McDonald's even have a Q&A section? Were fans asking if the Ronald McDonald/Grimace ship would ever become canon? Who has questions about McDonald's?!

While it sounds like the use of the chemical is on the up-and-up...

There is a very "doth protest too much" sort of vibe to the whole thing. In their response, McDonald's says, "Dimethylpolysiloxane is a food-grade additive that is deemed safe by the World Health Organization." Most restaurants generally don't have to remind their consumers that a worldwide governing body has looked over the case and decided that, yes, the food that they're serving is, in fact, food.

Also, what had to have happened to make McDonald's have to add an anti-foaming agent to their oil?

Were McDonald's employees getting splashed by hot oil? If that were the case, I'd totally understand them throwing whatever chemicals they had into the oil to stop it.

The report claims that the Japanese researchers have "developed a method for the mass preparation of cellular aggregates, also known as 'hair follicle germs (HFGs)'."

In layman terms, that means that the science folks have done a science that will make it so bald boys can get a bunch of little science clumps and put them on their head. Then they'll get more hair, because of the science.

These hair follicle germs have lead to new hair growing on mice.

You heard it here first folks: baldness in mice will soon be a thing of the past.

The process has yet to be tested on humans.

So far, this process has not been tried on people, so we don't yet know if it'll work until it's tried on a man and he gets a job that he isn't qualified for.

But there are certainly hundreds, nay, millions of men willing to gorge themselves on McDonald's fries to test it out.

Now, every man will want to chow down as many McDonald's french fries as they can. And every woman! And men who want to be bald! And men who don't even know the fries can make them not-bald! People just really love McDonald's fries!

It raises the question — would we rather be overweight?

If it turns out that eating McDonald's fries does help to stimulate new hair growth, would it be worth it to go through everything that Super Size Me guy went through?
Buy Now

But being bald does suck.

People just come up to you and think that they can stroke your head, as though hair is the "Do Not Disturb" sign of the head; when it's not there, you're free to get all up in someone's personal space.

Would you trade your figure for your hair? It truly is a devil's bargain.

It's a terrible deal — for those who engage with it, no matter what happens, it's not good.

But is a fix-all chemical really the cure for baldness induced insecurity?

Let's imagine for a second that there was a cure for baldness, and it was out on store shelves and was as easy to buy as a twenty-ounce Mountain Dew. Would that really solve anything?

Maybe the real work is finding a way to be okay with our appearance.

Chances are, there are much deeper issues at play than the specifics of how we look if we're feeling insecure. Oftentimes, what we really don't like is the way we feel.

Maybe the cure for the insecurity that comes with baldness has been inside us, all along.

The pain that men experience when it comes to baldness isn't a consequence of other people's judgment. It comes from constantly judging themselves. Maybe balding men should learn to love themselves. Because if they could do that...

It wouldn't matter if they were bald, bloated, or missing half their faces.

Harvey Dent is right - that was very insensitive to people who have had half their faces burnt off, thereby leaving them vulnerable to their evil alternate personas.