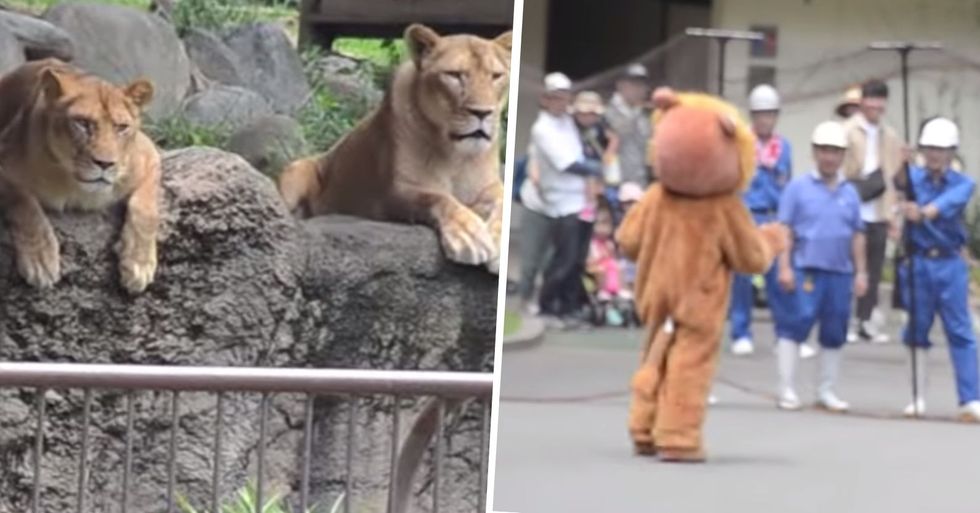 While emergency drills tend to center around a not-very-funny event, they can be oddly hilarious - particularly when there's no real danger at hand. But one that has truly tickled the internet this week involves a zoo in Japan, which has a rather unusual way of preparing for a lion escape.

When you think about it, there's probably no better way to prepare for such an emergency - but seeing the photos out of context will likely have you rolling your eyes and stifling your giggles in equal measure. We've got the best of the internet's reactions to this truly bizarre escape drill, plus the images that have got everyone so confused and amused.

An emergency drill can be a literal lifesaver.

Being prepared for the most terrifying and potentially dangerous possible future events is the best way to minimize their impact and ensure maximum safety.

There are some classic drills.

We've all been a part of a false fire alarm in our lives. But one thing that we rarely think about is the inner workings of a zoo.

Because it's pretty scary, when you think about it.

The fact that zoos are home to some of the most dangerous animals in the world, potentially ready in wait to make their escape, makes them seem a bit more of a treacherous experience.

But how can you prepare for such an event?

Well, one zoo in Japan has broadcast their plans in the event of a real lion escape - and the internet is absolutely flabbergasted at the footage.

The video of the drill quickly went viral.

And it's easy to see why. One unfortunate zoo employee was, for reasons we don't quite understand, forced to wear a lion costume for the event.

The lion-costumed employee was made to prance around the zoo.

While his amazingly straight-faced coworkers got to "work" on safely catching him using, of all things, a giant fishing net.

It was hilarious to watch how seriously the employees were taking it.

The man playing the lion took things to the next level, though, getting intensely into character, taking down his friend.

This image had many laughing out loud.

The fact that the zoo employees seem to have used a large piece of net to capture what would, in real life, be a wild and angry lion, had really tickled many.

But one ex-zoo employee has confirmed that these kind of drills are, in fact, real - and they have to be taken seriously.

But there was one aspect of the vid that people couldn't get over.

At one point, the camera pans over to the real lions, who are watching the spectacle unfold.

The two lions looked a lot like two familiar faces - Statler and Waldorf from The Muppets.

You must admit, these guys look oddly familiar - and fundamentally unimpressed.

Those who saw the video were highly amused.

The sassy look on the lions' faces really does take the human race down a peg or two. If this is our best plan to defeat them, we're probably in trouble.

Others saw this reaction.

It seems like the lions are as skeptical as we are.

You can almost see them rolling their eyes at the very idea that this drill was approved to go ahead.

Some imagined what the lions were thinking.

@barefoot_cas @angiebaermn @Johnny_suputama "My man would put up a fight before getting caught. This is insulting!"
— Jimmy Black (@Jimmy Black)1561228786.0

It did seem as though the beasts were pretty insulted by what humans thought would slow them down.

Others noted another expression on their faces.

They thought that the lions were simply amused by what they were seeing, enjoying the bizarre show that the zookeepers were putting on for them.

There was another excellent comparison.

Two of the watching lions were making very cartoon-esque eye contact, in the manner of Simba and Nala from The Lion King.

They did look rather exasperated.

The eternal battle between mankind and nature has never been so perfectly summed up in one video. The lions can't believe that they're somehow the ones in captivity.

Some thought that the lions were plotting.

The looks of pure derision on their faces suggests that they were watching and thinking, "there's absolutely no way these dumb humans can outwit us."

Doing the emergency drill for a lion escape directly in front of those potentially escaping lions does seem like a potentially ill thought through idea.

Because, now, the humans have lost the upper hand.

All we had going for us was the element of surprise! Now the lions know exactly how to evade capture if (or when) they eventually make their moves.

@Johnny_suputama I'm more worried about the lion on the left. She's paying too closely attention. See her leaning forward, she plotting.
— Shaun (@Shaun)1561231991.0

She was leaning forward and watching very closely - almost appearing to be taking notes on the humans' plan in order to evade it in the future.

Some thought that there may be a second plan about to be put into action.

@Johnny_suputama Lion leader: "So we jump at the people holding the net, trap them under their own net, and keep going. Any questions?"
— Cameron Bennett (@Cameron Bennett)1561220951.0

The lions now had all the intel that they needed in order to successfully prevent the drill from working properly.

Here's the full video of the drill.

We have to admit, those lions look like they're paying a little too much attention for comfort - although perhaps they're just amused by the bizarre nature of the performance!