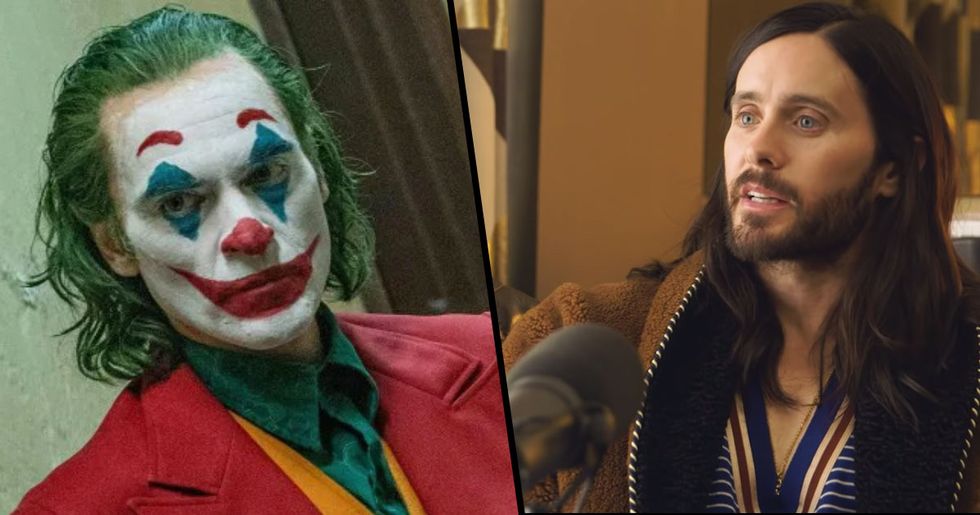 It's never nice to feel like you've been replaced, right?

But in the case of Jared Leto being annoyed about Joaquin Phoenix making the Joker movie, I have no sympathy.

Joker (2019) was no relation to The Suicide Squad franchise and given that at least 22 actors have apprised the role of Batman's nemesis, Leto can hardly claim ownership of the role.

That being said, it seems he didn't quite see it that way.

In fact, news on the grapevine is that The Dallas Buyers Club actor was so peeved off to find out about the Joker production that he tried to get it shut down.

Since it's release Joker has been a smash hit.

Joaquin Phoenix's performance has already been tipped for an Oscar nomination. Despite there being some controversy over Todd Phillip's in-depth look into the mental health of the character, there has been no denying whatsoever as to how impressive Phoenix was in the role.

The success of Joaquin Phoenix's Joker has upset a certain someone...

Reports circulating online reveal that the Suicide Squad Joker, Jared Leto is not happy at all. It seems Leto feels as though Phoenix's performance has overshadowed his.

Leto was the first actor to play the Joker after the untimely death of Heath Ledger, who died whilst shooting The Dark Knight in 2008.

It was nothing groundbreaking. In fact, I think more people were impressed with the performance of his co-star Margot Robbie, who played Harley Quinn.

It came as no surprise to anyone when Warner Bros announced they were planning to make a spin-off Harley Quinn movie, with Robbie reprising the role. In the Birds of Prey movie, there will be no sign of Leto. The concept originally pitched to Warner Bros by Margot Robbie will find a Harley Quinn, newly single, after leaving the Joker. Meaning of course, that Jared Leto would not be needed.

It's not as though Robbie refused to work with Leto again, it's just that the idea pitched to Warner Bros went in a direction away from Leto's Joker...

It seems that only Jared Leto is having a hard time letting go of his Joker.

Playing the Joker was a childhood dream of Leto's but nothing lasts forever right? By kicking up a fuss over Joker, Leto has made himself look like a right cry baby.

I mean it's not like Leto has never acted in anything else...

Perhaps if Suicide Squad (2016) had been Leto's one and only acting gig we could understand why he was being so precious about it. In actual fact, Jared Leto's been acting for years. His first big part was as the teenage heartthrob, Jordan in the TV series, My So-Called Life (1995).

Leto turned heads in the new Millenium for his portrayal of the drug addict, Harry Goldfarb in Requiem for a Dream. Both the movie and Leto for his starring role received critical acclaim. After this performance, it seemed Leto was set for stardom.

But then Leto decided to take a break from acting...

The then 29-year-old, Leto decided it was time to focus on his music career. Jared and his brother Shannon had been making music together since they were kids and decided to form a band and see if they could make a serious go of it.

The band was Thirty Seconds To Mars.

Ever heard of them? They formed in 1998 and actually became really popular once the bros started putting their focus into it. With Jared Leto as song-writer and frontman, his brother Shannon on drums, TSTM was a major success. The band has had an array of different members but the Leto bros have remained the only constant. The band is still together but Jared Leto has been a bit busy of late, reprising his acting career.

Jared Leto showed what he was made of in Dallas Buyers Club (2013).

In a return to acting, Leto showed that he really is a force to be reckoned with. Playing the role of a transgender woman, Leto showed a sensitivity and believability that impressed the award boards. For his supporting role in Dallas Buyers Club,  Jared Leto picked up an Academy Award, a Golden Globe Award, and a Screen Actors Guild Award.

Did Leto get too big for his boots?

Now with a cabinet full of awards, Leto entered a new stage of his career. That stage being one wherein the actor felt as though he was, and should, be in demand.

When Leto heard about the making of Todd Phillip's Joker he had a number of questions for his agents over at ACC: For one thing, given that ACC manages both him and Phillips he felt as though he should have been "warned" about the project. Leto also felt that they could have struck some kind of deal and got him the role. Leto was offended to hear about the project at such a late stage- and was upset to hear Joaquin Phoenix had been attached.

Leto asked his music manager, Irving Azoff, to get the movie shut down.

In Leto's desperate attempt to get Phillips' Joker shut down, he assembled the help of Azoff. According to The Hollywood Reporter, Leto thought Azoff could use his connections to "call the leader of Warner's parent company," and "get Warner [Bros] to kill the Phillips film."

It seems Leto's hustling got him nowhere.

Well, of course, Joker was in fact made and Leto did not star. If anything, Leto's interfering did him no good at all. Not only has this situation damaged his public image but it has also affected Leto's relationship with Warner Bros and the agents over at ACC.

It seems the news that Jared Leto got real petty about Joaquin Phoenix taking on the role of Joker has not gone down well with the general public.

He probably shouldn't have said anything...

Lmao @JaredLeto stop being a cry baby about the new joker. Out of all the jokers yours was the worst one. stop hati… https://t.co/OnYPIJgCJw
— Jadniel Fernandez (@Jadniel Fernandez)1571524721.0

With news that Leto got possessive about the Joker role has led people to remember and express how bad they thought his Suicide Squad Joker was.

I mean did anyone think Leto was the best Joker?

As impressive as Joaquin Phoenix's recent performance was, Heath Ledger's Joker is surely the most legendary portrayal. And I'm sure if Ledger was still around, he would have been happy for Phoenix to deliver his interpretation of the role...

There are 3 types of people you can't trust people who lie people who cheat people who actually like Jared Leto's joker
— Trip_B (@Trip_B)1571525227.0

Now saying that Jared Leto delivered the best Joker is even more unpopular than ever before.

I mean some people are still saying they liked Leto's Joker...

say what u want but jared leto gave us something the other joker actors didnt and that is the 𝓭𝓪𝓶𝓪𝓰𝓮𝓭 forehead tattoo
— skullfuck℮r1312 (@skullfuck℮r1312)1571229993.0

But I guess that had more to do with a preference to the Suicide Squad Joker's aesthetic...

It's not a competition...

Except Jared Leto gets last place... for being a cry baby.

Apparently Jared Leto was annoyed at how many of his Joker scenes had been cut in Suicide Squad and was hoping to get his own spin-off movie... to you know, really go to town with his Joker performance.

It seems that all plans for a Jared Leto Joker movie are off the table.

Don't get too big for your boots and never ever try and kill a movie that Joaquin Phoenix is involved in. Why? Because Phoenix only makes cracking movies and we are collectively lucky to have his talent on this planet. Don't believe me? Continue scrolling to read about how Joker got an eight-minute standing ovation when it premiered at the Venice Film Festival.