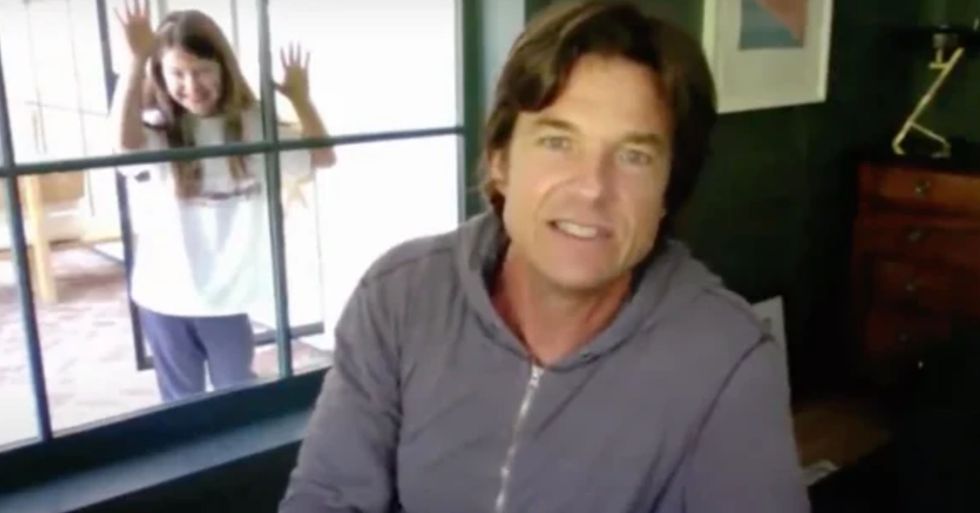 Jason Bateman's Daughter Crashed His Interview and It's the Sweetest Thing

There's nothing worse than the unexpected, is there, especially with unexpected guests.

But there are some unexpected guests that can be a nice surprise, as Jason Bateman found out when his daughter gatecrashed his interview.

How do you fair with surprises?

A surprise guest in the form of a spider or bug.

Then it's not welcome.

However, if it's family members or friends.

Then that's quite nice.

Something that Jason Bateman found out recently.

When a surprise guest crashed his interview.

Jason Bateman has had an extensive career.

He's appeared in Juno, Couples Retreat and Horrible Bosses to name only a few of his movies.

The drama, Ozark, has proved a hit with audiences worldwide and has brought Bateman to our small screens once more.

He's known for being an all-round good guy.

And he's not just a pretty face. He's recently tried his hand at directing too.

And the pair share 2 daughters together, Francesca and Maple.

With his daughter Maple having a small cameo.

During the video interview, Jason talked about various topics.

From his family's experience with the Easter Bunny to the handwashing tip he learned from Leonardo DiCaprio after watching The Aviator.

Before they went on to, of course, play a game.

Typical for the late-night show.

Kimmel and Bateman were playing a round of "Was I In It?".

A game in which Bateman was questioned on his successful career.

Kimmel had asked Bateman about his role in the '90s TV series, Simon.

And when he gave an answer...

A certain someone popped up at the Ozark stars window.

A certain someone, being his eight-year-old daughter, Maple.

And she could be seen giving a little wave through the window, before walking away.

"You see, I keep her outside. That way, there's more food for me inside the house."

You can watch the video of her crashing the interview here.

It was very sweet to see the family's relationship.

Bateman continued talking about his family, admitting that he was finding homeschooling hard.

He spoke of how they were having trouble keeping up with Maple's second-grade coursework.

He even added, "It's amazing how much I don't know."