Jason Momoa and His Grandma Are so Insanely Cute | 22 Words 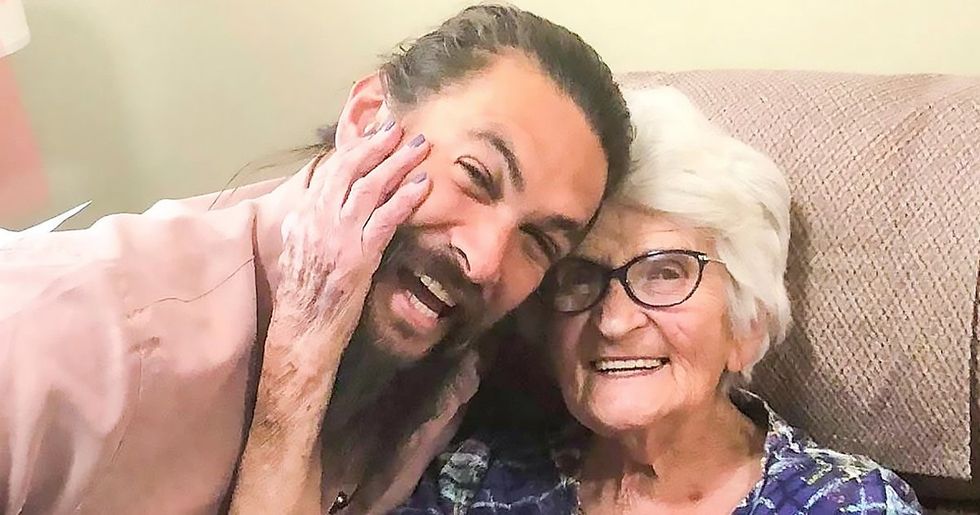 Jason Momoa and His Grandma Are so Insanely Cute

Jason Momoa is the crush of the internet. Those biceps. The abs. The sweet smile. It's hard to imagine a guy more swoon-worthy than Sir Aquaman. But it's not just his body that makes our hearts go pitter patter. He's also got that good boy vibe that makes us want to bring him home to meet the parents.

Even if he pays burly boys on TV and in the movies, his real-life persona is a bit softer: he's a family man, a joker, a friend to fans, and the kind of guy who's always got a smile on his face. So we were obviously already in love with him.

But somehow he's managed to take it up a notch (we have no idea how this is possible). Oh wait, we do know: posing for adorable photos with his grandma and going totally viral. Yeah, they're just as cute as they sound.

Jason Momoa has had an impressive career.

Way back when he started with a role on Baywatch.

But most of us came to know him on Game of Thrones.

And now he's...making waves as Aquaman.

Yeah, our boy has put in the work.

And he is 100% getting the acclaim that he deserves.

Even when he's not onscreen he's winning our hearts.

Whether he's showing off his chops on the climbing wall...

Or making us laugh.

Momoa does not take himself too seriously and we are here for it.

But balancing out his NSFW content is some truly wholesome stuff.

We can 100% say he's a family guy, who's always talking about his ohana.

Plus he's not afraid to get his hands (or his moustache) a little dirty.

Oh to be that Guinness.

Is it possible for this guy to get any better?

Hold onto your butts.

He's about to become even more attractive.

Oh, hold on we forgot a couple of his choice personal characteristics.

He's an environmentalist who uses his platform to educate people about stewardship.

He encourages his kids and shares his hobbies with them. MY OVARIES.

And yet somehow even with all that, we're still celebrating Mr Momoa for a totally different reason.

Brace yourself: awesome is incoming.

Not only does Momoa love his kids and wife.

He also extends his ohana to the other side of the age spectrum.

It's rare to find a celeb who has the humility and grace to share the spotlight with his grandma.

But Momoa is a rare guy.

He's not afraid to show where he came from.

And share just how much he loves his family.

We just wanted a chance to share more pics of our man crush.

When he stops being perfect we'll stop sharing GIFs.

The most adorable pics are incoming.

Welp if that isn't the cutest dang thing.

If you say you're not swooning a little...

How can one dude be so cute?

There's something about his beefy arms and her cute li'l old lady face that takes everything about this photo up a notch.

If there's a recipe for my perfect man, I'd say Momoa has all the components.

Funny, handsome, loving, and a family man who respects his elders? Yup.

And it's not even like this is the first time his Insta game has been so strong.

Like that time he stood up for Native rights.

Or when he showed off his climbing chops.

Yeah, I could totally do that.

Is it when he's being a little bit sassy?

Or perhaps when he adds to the sass...

With some sex appeal?

Honestly he's got something for everyone.

And get ready to swoooooooon.