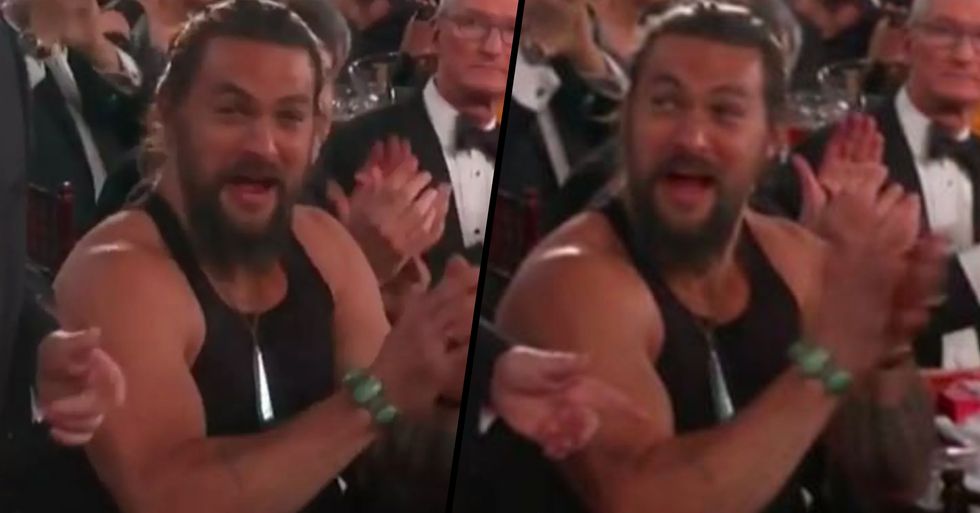 Now he's a verified superstar - with an icon for a wife and an enviable career. But one facet of his skillset Momoa can never move away from is his heartthrob status. His infamous shoot for Esquire gave the internet some of the best Momoa pics we've ever seen.

It's true, Momoa is never one to follow the rules. But his outfit for the Golden Globes last night might be his most rebellious move yet ...

And his latest interview with Esquire seems to reinforce this.

In it, he showcases his softer side. In spite of his imposing appearance, Momoa really seems to be a sweet and down to earth guy.

The pics from the shoot are almost too good to be true.

His interview is promoting his latest acting venture.

She was “literally my childhood crush," he says.

But that's not the main reason this story has gained attention.

The reason it's basically broken the internet? The fact that Momoa's Esquire cover features him cuddling a cat.

Honestly, this is what dreams are made of.

Have you ever been so jealous of a feline before?

Last night, Momoa made an appearance at the Golden Globes.

He walked the red carpet with wife Lisa Bonet, with both looking absolutely stunning.

But you can't keep Momoa in a suit for too long.

And after his red carpet walk was done, Momoa couldn't ditch his suit jacket soon enough.

And what was underneath it?

Not a shirt, of course. Nope, Momoa was rocking a casual tank top.

And if you thought people would be mad?

I think my favorite part of the #GoldenGlobes (other than @rickygervais roasting everyone) was when the camera caug… https://t.co/lVFZ4OagTt
— Allison Wonderland (@Allison Wonderland)1578286757.0

Well, you thought wrong. Hey, Momoa is always uniquely himself - and that's why the internet loves him.

In fact, most people had quite a different reaction.

One of the utmost thirst.

Although, even for those not harboring a Momoa crush...

The choice to rock a casual look to an awards ceremony was still aspirational.

Get you a man who can do both.

He somehow looks just as handsome in his tank as he does dressed up.

No one else could pull this off.

We must protect Jason Momoa at all costs!

Sure, it's something of a double standard.

But life's not fair - and your boyfriend isn't Jason Momoa.

In a world full of try-hard celebrities, it's great to see someone who doesn't take life so seriously. Fancy seeing more from the Golden Globes red carpet? Scroll on for the best (and worst) dressed.