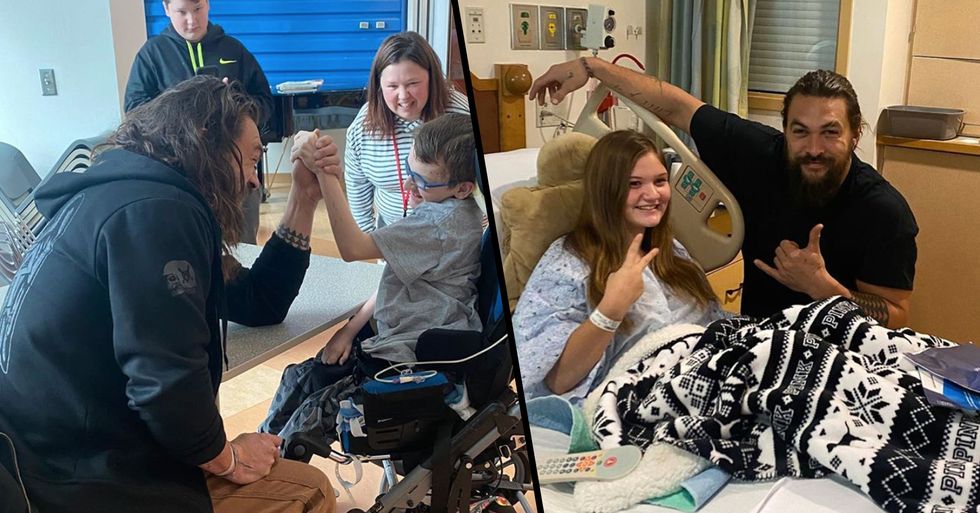 When you think of Jason Momoa, you probably think of him as a semi-untouchable, rich and famous Hollywood actor. But, this wasn't always the case. In fact, prior to his breakthrough role as Khal Drogo on HBO classic, Game of Thrones, the actor had worked for many years in relative obscurity. And even after being cast in the show's very first season, it took Momoa a while to start to reap the benefits of life as a successful and famous actor as this shocking throwback shows!

Now better known for his starring roles in Aquaman and Justice League, it's clear that Momoa has come a long way from these humble beginnings - and the internet is loving his rags-to-riches tale.

He is using his newfound celebrity status as a way to spread aloha to everyone he meets, including stopping off at a children's hospital on his way to work. Scroll to the end to see the adorable photos.

Is this guy even real?

Momoa is set to star in the movie adaptation of classic sci-fi novel, Dune. The film is directed by Denis Villeneuve and will be released later this year.

But, still, we're pretty sure that Momoa doesn't have to worry about money.

As a star of one of the biggest shows to ever be on TV, as well as being the eponymous superhero of a movie that's grossed over a billion dollars, we have to guess that he's doing pretty well for himself.

But that wasn't always the case.

Momoa shared a throwback snap this week, depicting how vast his change in fortunes has actually been - and the internet is loving it.

In the image, Momoa is lying on a mattress in the back of a van.

He writes in the caption that after finishing filming Game of Thrones, he teamed up with a friend and "rented a panel van aka UHAUL in Belfast and drove around beautiful amazing IRELAND searching for the greatest pint of Guinness. Turns out it’s perfect everywhere."

But it was the reason for Momoa's impromptu trip that really surprised the internet.

The reason that he claims he decided to drive around Ireland, sleeping in a van? Well, it's quite simple: "While filming GOT we had a lil break. We were too broke to fly home."

This really shows how far Momoa has come.

It seems like Game of Thrones really did elevate the star's career, meaning he will likely never have to worry about paying for a flight again. But it's clear that Momoa still has a way to go, in his eyes, anyway. He writes, "Been a long road and I feel like I’m just getting started."

People are loving this throwback snap.

It currently has around eight hundred thousand likes on Instagram, plus tons of inspirational comments. Actor, Josh Brolin, writes, "Those desperate moments of past always, like coal to diamonds, turn with the precious present via hindsight."

Just when we thought we couldn't love Jason Momoa any more!

Not only does he love Guinness and isn't afraid to sleep in a van, but he also takes time out of his busy schedule to visit sick kids. He's pretty much perfect!

He met with several children who were confined to their hospital beds.

"The greatest part of being Aquaman is making children happy spreading aloha," he shared with his followers on Monday.

Jason shared a video clip of him arm wrestling with Joshua.

Jason made a deal with Joshua - one of the kids he went to visit at Pittsburgh children's hospital - "If you win, you're coming. If I win, you're still coming," In the end, Momoa lost to the arm-wrestling match.

After being defeated by Joshua, he went on to commend the boy on his muscles saying they were "way bigger. These are fake," Jason said, about his own.

He met with their families.

The actor tried to meet with as many children as possible.

The children weren't the only ones grateful for his appearance.

UPMC children's hospital tweeted @prideofgypsies to thank him for making the effort to come and visit the children and their families at the hospital.

He's been filming a movie.

Jason has been in Pittsburgh filming a new show for Netflix.

His new movie Sweet Girl sees him play a husband and father seeking justice after his wife's death.

Jason is also the producer of the film.

He is set to come back to the big screen as Aquaman again in December 2022 for the sequel.

He clearly loves the opportunity to make children happy.

His Apple TV+ sci-fi drama, See, is set to start filming its second series on February the 3rd. Let's hope we don't have to wait long! Keep scrolling to see Jason without his iconic beard...