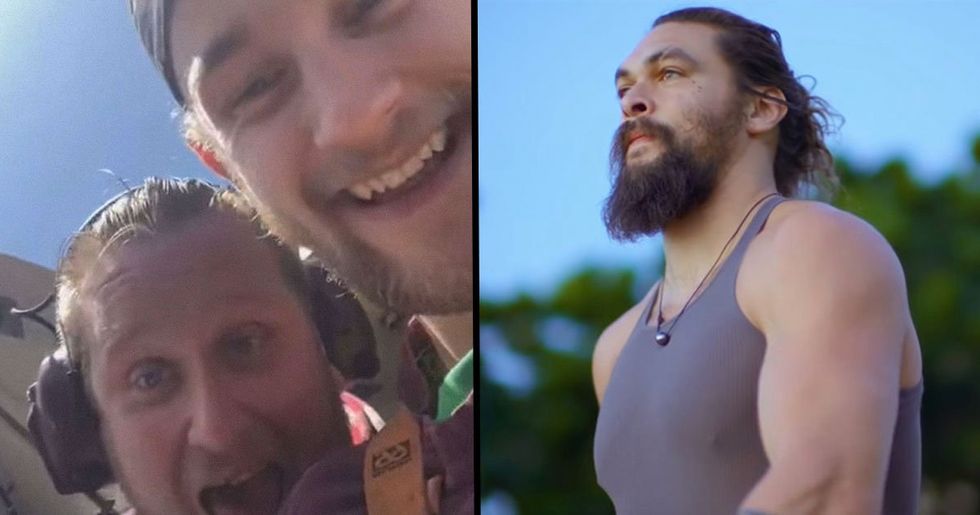 The internet is a place of debate and opinions, but if there's one thing that we can all agree on, it's that animal cruelty has no place in this world. Recently, a sickening video of two fishermen has surfaced online. They are seen to be laughing while hacking at the tail of a shark until it comes off. They then proceed to drop the defenceless creature back into the sea. The most disturbing thing about the whole incident is that they were uttering the most disgusting things as they did it.

How does one, in their right state of mind, trap and maim a harmless creature (yes, the shark was completely harmless), while also recording themselves doing it?

I'm extremely appalled and so is Jason Momoa, who had a pretty emotional message for the assholes.

Let me take you through the whole story, from the initial video, all the way to what Momoa had to say about it.

Before I begin, I must warn you, this article will contain some graphic images throughout.

In order to tell the full story, I've included images from the original video. Some readers may find this content disturbing, so please read at your own risk.

Animals are a vital part of our ecosystem and are important in maintaining the natural balance of the planet.

Humans are generally very fond of them and, even if some aren't, we can generally agree that animals should be treated with respect.

So why would people go out of their way to hurt them?

Hunting has been a part of human life for as long as anyone can remember, but that doesn't mean that it's ethical. In most countries, killing animals as a social activity is still considered fine in the eyes of the law. In other countries, punishments for criminals who engage in this kind of act are very weak, so there seems to be little fear of being caught.

Because of these heinous acts, the overall population of wild animals is being threatened.

Elephants, lions and rhinos are on the verge of becoming extinct. Asian and African elephants had been already been added to the list of endangered animals in 1989, but that hasn't stopped poachers from reducing the numbers even more. According to Bagheera, the number of elephants left in the wild has dropped from 600,000 to an estimated 35,000.

A number of sharks are on the list of vulnerable species.

The Great White, the Basking and the Dusky Shark are considered "vulnerable," while the Whale Shark has now become an endangered species. Despite these numbers, there are people out there still killing them unnecessarily.

Charities are doing all that they can to make laws surrounding this issue stricter, but progress is slow.

It differs depending on the country and the animal, but hunting has been made illegal in several. However, random acts of violence still continues to happen, as proved by this recent video that surfaced online.

Recently, a video of two fishermen has surfaced online.

It shows two men on a fishing boat just off the coast of Greenland. They are both laughing while simultaneously hacking at a shark's tail.

They then proceeded to drop the shark back into the water.

They both watch as the shark struggles to swim away from the boat; its lower body is just swaying from side to side. It's honestly one of the most disgusting things I've ever seen.

A shark's tail is a crucial part of its body.

#Sharks often have their fins cut off while they're still alive. They are tossed overboard, where they sink to the… https://t.co/ypN6iIm7ip
— Let Fish Live (@Let Fish Live)1559221289.0

Without a tail, it cannot propel itself forward, which means that the shark will not be able to catch fish. Without food, it will fall to the bottom of the sea and eventually die of starvation. A cruel fate for any fish.

And just when you think that it couldn't get any worse...

It really does. In the video, you can clearly hear one of the men shouting something as he lets go of the maimed shark. According to Fox News, he says: "Good luck trying to swim, you punk!" as he laughs with his friend.

Here's a close-up picture of the fishermen from the video.

Both of them reveal their smug faces directly to the camera after they've let the fish go, and you can actually see the excitement in their eyes. It's sickening to know that they've engaged in such a callous act of violence and they're laughing about it. I will never understand the pleasure that comes from attacking defenceless animals.

And if you're out there wondering why I described the creature as "defenceless," it's because it was.

The shark was later identified as a Greenland Shark and it is the longest-living vertebrate known. It's also said to be one of the least dangerous sharks to live in the deep blue. Being part of the "sleeper shark" family, they're not as big or as violent as the sharks that we usually think of, like the Great White. They are so much smaller than them and they have tiny fins. Does that sound threatening to you?

And the stats prove the same thing.

According to Britannica, the only possible Greenland shark attack to have been reported was in 1859. Other than that, there's not been a streak of violence noted from the species.

If you've got a weak stomach, I wouldn't advise watching the video...

It was deleted a couple of hours after it was posted, but a Facebook-user managed to save a copy of it from one of the fishermen's accounts before it was removed. I tried to refrain from watching the clip myself, but I just couldn't believe that someone could be so cruel. Watching one of them hack at the tail while laughing was difficult to stomach.

It's hard to watch, for sure.

Blue Planet Society (@Seasaver on Twitter), posted this, expressing their anger. They say: "Just imagine what commercial fishermen get up to when they aren't being filmed". This is true. It raises so many questions about the world of commercial fishing.

Another person that wasn't very pleased was Jason Momoa.

You may know Jason from his role Aquaman in the DC Extended Universe or from Game of Thrones.

He took to Instagram to post, not only once, but twice, about the incident with the fishermen.

He just couldn't keep quiet about this issue. And I don't blame him. Those men deserve to be brought to justice.

He re-posted the original video with a pretty emotional caption so that he could let his followers know what was going on. Momoa writes: "Follow @savethereef WTF. F**k these assholes I’m so f***ing upset What is wrong with humans I would give anything to catch these idiots F**K. Please repost to get these f***ers". To say that he was extremely pissed about what occurred would be an understatement.

A little while later, he posted again.

This time, Momoa addressed the two men directly. He also posted screenshots from the previous video, exposing their faces. His caption reads: "And there you are......it sucks to see that you are probably good men friends providers fathers but you fucking did this. Your life will forever change I have never in my life seen something so cruel. Your laugh makes me furious never have I wanted to hurt a human as much as I did when I heard your laugh and what u said. This will change you and hopefully you will save and protect I pray you find redemption. we all make mistakes but what u did was evil PURE EVIL. You will get what that shark got. FUCK YOU".

Momoa's emotional, yet brutal, message encouraged fans to express their views about the video as well.

After watching something as cruel as this take place, you would expect the internet to completely explode. And it did. The post received over one million likes with thousands and thousands of users commenting their thoughts.

Here's what they had to say...

Another one encouraged Jason to "get them!".

This user was extremely concerned for the shark.

I wonder if some people assume that just because animals can't always express their pain, they don't feel any. That's the only reasonable explanation as to why this kind of thing occurs.

The fishing company has spoken out about the incident.

They have expressed their horror at the incident and have said that it is "completely unjustifiable". According to a translated version of their statement by RUV, the fishermen's contacts have since been terminated.

Apparently, the two men have already been fired and are facing fines up to 8,000 dollars, but, to me, personally, it seems as if they got off lightly because technically they didn't break any Icelandic laws. At the very least, they should be facing a prison sentence. And if you still don't think that's good enough, then maybe they should have one of their legs cut off. Let's see how they like it.

Sadly, this isn't the first time that the internet has had a meltdown over animal cruelty.

Over the past couple of years, there have been multiple incidents in which hunters have murdered wild animals just for "fun". And, recently, the country of Botswana has decided to lift its ban on the trophy hunting of elephants, so images like the one above are going to appear on the internet more often. It is disgusting.

Despite the work that charities are doing to prevent the unlawful killing of wild animals, it seems as if it's going to continue to occur. More laws need to come into effect, and punishments should be harsher for those caught breaking the law. The lack of empathy humans that have is concerning, and this video is the perfect example of that.

What can we do about it?

Share the video like Jason Momoa did! We need to call out people that are involved in the torture of animals. Let's also make sure to raise awareness about the problems with commercial fishing.

And if you're distressed after this news, remember these two faces.

These are the men to blame.