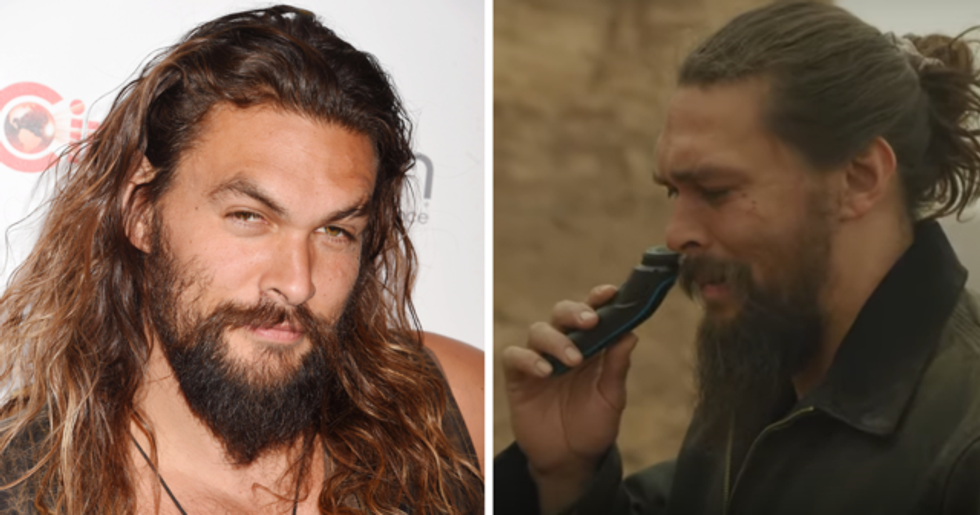 Since the late noughties, men around the world have begun sporting increasingly large amounts of facial hair. It could be part of the hipster trend, it could be part of society's general disdain for the smarter habits of our predecessors, or it could be because certain shows (ahem Game of Thrones) like all of their men to have beards. Either way, facial hair is back. Or at least it was.

The final season of GoT is sure to bring some surprises, but perhaps the biggest change so far has been the revelation of what some of its stars look like without facial hair. From Tormund Giantsbane to Jon Snow, we've got their photos of what they look like with a clean shave.

But, recently, Jason Momoa has shaved off his iconic beard and the reason that he's done it is... surprising.

Jason Momoa began his life of stardom as Hawaii's model of the year.

His father is Hawaiian, but he was brought up by his mother in Iowa. Once he graduated from high school, though, he decided that Hawaii's island life would suit him better. Who can blame him?

Lifeguarding was his calling.

Jason Momoa was apparently the Gulf Coast's youngest ever life-guard. He then got his breakout role in acting, portraying lifeguard, Jason Ioane, in Baywatch: Hawaii. He actually beat another one-thousand three-hundred people to the role but sort of regretted it. Apparently, people don't take you seriously after you've starred in Baywatch.

Momoa got his big break defending the galaxy.

In 2004, Momoa was cast in the role of Ronon Dex in Stargate Atlantis. He played one of a handful of scientists who discover the city of Atlantis. This was the real start of Momoa's bearded days.

Following the wrap of Stargate Atlantis, Momoa went to an audition. It was for a role in a new show called Game of Thrones. The casting director was also casting for a new movie, Conan the Barbarian. Momoa performed the Maori Haka dance, to prove that he was right for the role and ended up bagging two jobs in one!

Momoa has become part of the Justice League.

In 2016, Momoa entered the world of DC comics with a cameo role in Batman vs Superman. But this wasn't just any cameo role, it was his first appearance in the role of Aquaman. He took up the role again in the DC Comics cross-over movie, Justice League. He was working alongside The Flash, Cyborg, Wonder Woman and Batman, but somehow the movie was a box-office flop.

This was a debut appearance for Aquaman on the big screen.

Momoa's performance in Aquaman was the first time that Aquaman starred in his own movie. Funnily enough, whereas in Stargate Atlantis he was part of a team discovering Atlantis, in this role Momoa's character is protecting Atlantis. But, of course, that's not his most famous role!

Momoa is perfect in the role of Khal Drogo.

Have you heard that Game of Thrones is back?

Unless you have been living under a rock, buried in the depths of the ocean, on a distant planet, there's no way you can have escaped the news that Game of Thrones is back for the final season. The seventh season had average viewing figures of over thirty million, but this season is expected to do even better! People are crazy excited for it.

After seven epic seasons, people are pretty invested in the lives of the characters. As much as anything, after the way that people were killed off in the first few seasons, it seems like a miracle that anyone at all is still left alive.

Who is going to take the iron throne?

The family houses have been squabbling over who should be in charge ever since the death of Robert Baratheon. Are the rich Lannisters the family that have a true claim, as Cersei was married to Robert? Should it be someone from the North, who has united houses and led in an honorably? Or should it revert to the Targaryens, who were ruling before Robert's rebellion? And more importantly, will there still be an iron throne to rule on now that the white walkers have broken through?

Momoa knows who should take the throne.

This video makes it pretty clear who Momoa thinks should get the throne, and his response is not all that surprising. But wait until you see his latest video wherein he takes a shave. The transformation is truly remarkable.

Momoa isn't the only one who is known for his beard on GoT.

Tormund Giantsbane is a fierce wildling who helps to lead the freefolk to help Jon and the Night's Watch in the battle against the icy threat from beyond the wall. Although they aren't natural allies, they are able to set aside their differences and recognize that this battle is bigger than their personal views.

Tormund is an honest character, much like Jon, but his honesty tends to come in the form of one-line jabs at people around him as he sees straight to the heart of an issue. The storyline that the audience has been enjoying thr most, though, is his interest in Brienne of Tarth. He has often spoken of his prowess with women, but he's never seemed particularly interested in anyone until Brienne came along.

Tormund is a wildling, and he looks like one. Even in real life, Kristopher Hivju has a bit of a wild look about him because of his large, unruly beard. It's recently been discovered, though, that Hivju didn't always look so wild.

The beard seems to be crucial to Tormund's character.

The difference is astonishing. With the beard, Hivju is a strong wildling who is ready to enter battle at any given moment. Without a beard, he appears to be a much calmer, gentle soul. Wait until you see what Momoa looks like without a beard. You won't believe it!

Is this even the same man?

This Twitter-user got it spot on when they drew this comparison. Tormund certainly resembles Prince Adam more closely than a wildling. Who would have thought that the prince would be the character from Beauty and the Beast that he most resembled?

It must be the shaving season.

Winter may be coming, but GoT actors, seem to be feeling more in need of a spring shave. The photo of  Tormund without a beard is an old one, but another actor recently took to the razor and shave off his iconic beard.

Jon Snow is the King of the North.

Jon Snow is definitely a fan favorite. Honest, trustworthy, loyal, and brave, Jon is everything that we all like to hope we would be if we were ever thrust into a medieval political power play. He doesn't care about politics, and he doesn't care about what people think about him, he just wants to do the right thing and to protect the people of Westeros.

Jon Snow has also got a distinctive look.

Kit Harrington has maintained his Jon Snow image throughout the last seven seasons. He has always had long hair and a beard. It's the scruffy, careless look that helps him to appeal to people so much more than the preened Lannisters. But now he's gone for a different look.

Have you ever wondered what Jon Snow would look like after a shave?

Well, now you have your answer! He certainly looks more dapper, although many people are less than happy with the change. As part of the promotion for this final season of GoT, Kit Harrington was performing on Saturday Night Live. He (carelessly) told them that he was up for anything, so they got him to do several skits, wherein he had to play Winston Churchill and Michael Jackson. This required a shave.

People weren't happy about the change.

Okay, so some people took it a little too far. He doesn't even look that different… But if the reaction to Jon Snow's beardless face was this intense, imagine what people have to say about Jason Momoa's new look.

Momoa has actually shaved his beard off for a very important reason.

jason momoa shaved off his beard because you fucks don't know how to recycle and keep the planet clean. can't belie… https://t.co/vpngOGlTtB
— capsicle (@capsicle)1555588011.0

That's right. If you had done a bit more recycling, or taken the bus instead of driving a couple of times, Momoa might still have a beard. Okay, so that proabably wouldn't have been enough, but he is trying to promote the importance of recycling.

We are in the middle of a climate crisis.

Protests are taking place all over the world, mostly by the young people who are going to have to live in the world that we are destroying. Students went on strike to try to make the government listen, but they plowed on with their investments in non-renewable energy, like oil anyway, while dismissing students' actions as pent-up youth.

The Extinction Rebellion is a form of civil disobedience that is rising up across the world. With its heart in London, hundreds of peaceful protestors have been arrested, all because they are trying to make the government see that we care about the planet that we live on. Rather than arresting people, maybe they should try to listen to what the people are telling them. And if that doesn't work, maybe they will take notice of Momoa's shave.

This is the Momoa that we all know and love.

Before we see the video, let's take one last moment to remember what Momoa looks like in all his bearded glory. You need to see the before shot so that you can understand just how important climate change is. Okay, are you ready?

If you haven't seen it already, this is the video of Momoa shaving.

This wasn't just any shave. Jason Momoa had not shaved since 2012. This was one of the finest beards that anyone could aspire to have, and now it is gone. This is what climate change does people; it alters the world into an unrecognizable place.

People are pretty upset about the shave.

Jason Momoa is certainly known for his beard, and it was a beautiful beard, but we have to remember why he has done this. Also, it's not like he looks bad without the beard. Don’t shoot me, but dare I say, it's not necessarily a bad change….

We have to remember why Momoa has done this.

The world only has a finite number of resources, but we treat it as if everything is disposable. Where do you think everything goes after you use it and throw it in the bin? Plastic bottles are a completely pointless waste of single-use plastic. There are so many other ways to drink and transport water, and they don't have to cost much either. Aluminium cans seem like a great way forward to grab water on the go!

Do you think it was a fair trade?

The beard has gone, but maybe it was worth it... Climate change isn't going to stop unless we all start taking drastic action and making drastic changes. We need huge changes in policy and changes in our lifestyles so that we can be real life superheroes and save the world. It might not hit your country or city first, but this is something that affects everyone. We need to take action and prevent further climate change, even if it means losing some much-loved beards.