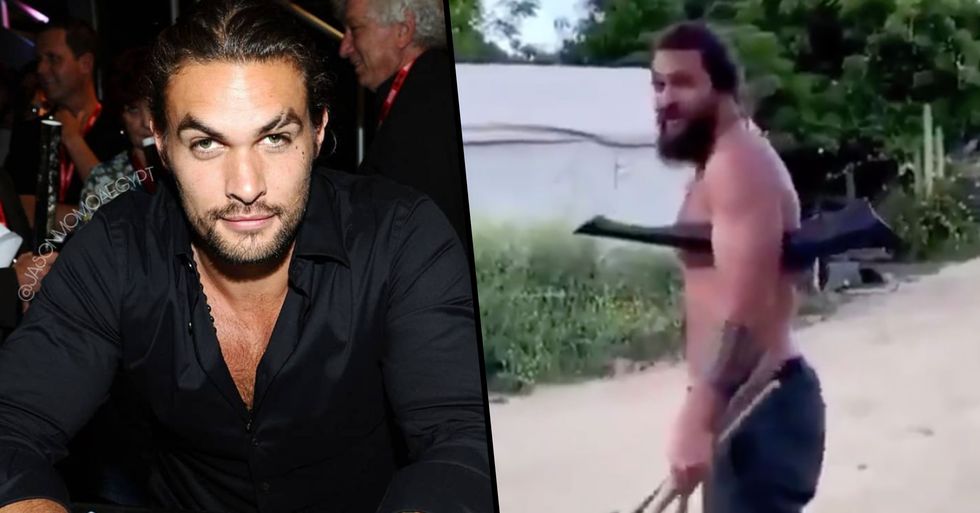 It doesn't come as a shock to learn that Jason Momoa has turned himself into a gym teacher for his kids whilst in lockdown. But one of his ax-throwing lessons has caught the attention of fans online for its particularly dangerous nature...

Keep scrolling to see the shocking video so you can decide if the outrage was justified...

It doesn't get better than Jason Momoa, does it?

Despite his Hawaiian heritage, Momoa was primarily raised in Iowa...

But on-screen, his first big role was on Stargate: Atlantis.

The sci-fi military hybrid was actually fairly successful and Momoa starred as Ronon Dex, to much critical acclaim.

But there's really only one role that could be deemed as Momoa's big break.

As the leading warrior in the savage Dothraki tribe, Momoa was, unsurprisingly, very violent. In one particularly memorable scene, Drogo brutally murdered Viserys Targaryen by pouring molten gold onto his head... ouch.

In the early episodes of the show's first season, Drogo was married to Daenerys Targaryen in an arranged ceremony. But the 2 seemingly opposite characters developed real feelings for each other and theirs became one of the cutest and most genuine love stories in the show.

Even though his character wasn't alive throughout the entire GOT, Momoa is still a fan-favorite...

In 2005, Momoa met actress, Lisa Bonet, and the pair began a relationship. Although there were reports that the pair had married in 2007, they actually didn't end up tying the knot until 2017.

But if there's one thing that is very obvious...

Is that Momoa is no ordinary dad... he's an extremely fit and healthy dad.

The actor is known well for his incredible physique...

So we can only just imagine his daily workout regime.

Just like millions of others, Momoa is currently living in lockdown with his family.

As every parent right now can agree, keeping our children entertained every single day is no walk in the park.

But Momoa has decided to take on the valiant role of the P.E teacher during lockdown.

Appearing recently on The Ellen Show via a live stream, the actor spoke about how he has been keeping busy with his family during these difficult times.

He revealed that his family are actually having a wonderful time together.

They're also thankful for their backyard space, which gives them room to enjoy being outside while still social distancing.

Of course, it has been a bit of an adjustment...

But the kids are enjoying themselves regardless, and they were already homeschooled so that isn't anything new for them.

He has incorporated these tools into his classes...

"Thank god they have their teachers, and much respect, because it’s kind of [over my head] for me. I’m like the P.E. coach, like 'Get your ass outside!' You want to go rock climb, skateboard, that’s about it," he said.

Even though it was meant to be a funny video, and it was because no one got hurt, it seems as though some people just found the whole concept too uncomfortable.

In the video, Momoa is teaching his son how to throw tomahawks...

But without looking at the target.

You can see him preparing himself with all the weapons.

The actor is holding several axes in his left hand, while in the other he is aiming a tomahawk at a time before simultaneously looking away and throwing them at the "target."

"You kinda want to glance and turn away. It's not really important," Momoa says to his son, who appeared to be recording the video and laughing. "Just make sure no one's walking in the way, you know what I'm saying?"

"It's all about arrogance and confidence. You don't even need to look."

We're assuming this is the advice that has got people riled up.

There have been mixed reactions to the advice, as you can see.

This Facebook user believed that teaching children such risky skills is careless, not to mention extremely dangerous.

Others worried about whoever was in the tent...

@SportsCenter @PrideOfGypsiesJ So we're just going to ignore the first one that killed someone sleeping 😂
— Ian (@Ian)1589308878.0

Even though a lot of Momoa's shots in the video hit the target, a few of them missed, with one particular one hitting a tent we hope was empty.

What do you think? Are people just overreacting or is it for a good reason? We just want to thank Momoa yet again for providing us with some quality content during the lockdown. One woman who is not doing so well during this difficult time is Ellen DeGeneres, keep scrolling to find out why.