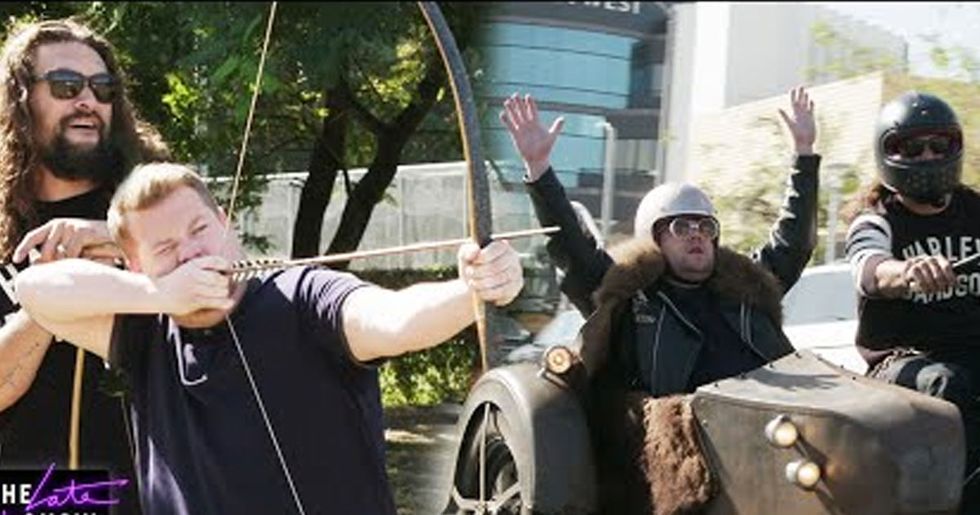 Now he's a verified superstar - with an icon for a wife and an enviable career. And his latest slot on The Late Late Show with James Corden has cemented him as an absolute legend.

And his latest move has people loving him even more.

This week he appeared on The Late, Late Show with James Corden and made quite the impression.

There's a new segment on the show.

It's called "2 Hours Off," and features James hanging out with a guest and doing whatever they desire.

But the one with Momoa was particularly funny.

Because of one thing in particular. Momoa is basically the manliest man out there. Corden, on the other hand ... is not.

It's not something Corden shies away from.

In fact, he's all too happy to poke fun at his less-than-toned physique and slightly effeminate mannerisms.

Just look at the two of them together.

The contrast between them is a sure-fire way to ensure the 2 Hours Off segment will go down in history.

It started with one of Momoa's favorite hobbies.

Motorcycling. Although, it seemed as though Corden was a bit less comfortable with the idea than Momoa was.

He claimed he didn't have the right gear.

But Momoa sorted him out, with this very fetching outfit.

And Momoa had another plan to make Corden feel more comfortable.

He brought a beautiful fur-lined sidecar for Corden to ride along in.

And Corden was happy with the set up.

He rode along with the Game of Thrones star, proudly proclaiming himself "Jason Momoa's sidepiece!"

The two were heading off to try another of Moma's favorite hobbies- archery. And to make it even cuter? He claims he picked up the pastime from his wife!

But you wouldn't expect anything less from this six-foot-four, Greek god lookalike, right?

But then, Momoa had a plan to really test his prowess. He wanted to try to shoot an apple off Corden's head- while blindfolded.

Corden wasn't so sure.

And so decided to sneak off and replace his body with a mannequin. And good thing he did - because Momoa managed to skim the top of the fake Corden's head with his arrow. Yikes.

Next on the agenda?

Some whip cracking, of course! Yet another thing Momoa excels at.

And he was keen to raise Corden to his level.

Is it just us, or are you feeling a little bit jealous of that embrace?

But the tuition paid off.

And Corden managed an impressive whip crack - to uproarious applause from the crowd.

And Momoa couldn't have been more proud.

He even rewarded Corden with a coveted hug. The jealousy is rising!

And soon he was quite a pro.

He was cracking whips and talking about how alive he felt in no time.

He even managed to crack an egg.

... On around the fifth attempt - but still!

We'd pay good money for this day out.

Here's the full video - we've never been quite so jealous of James Corden before! For more James Corden, keep on scrolling!