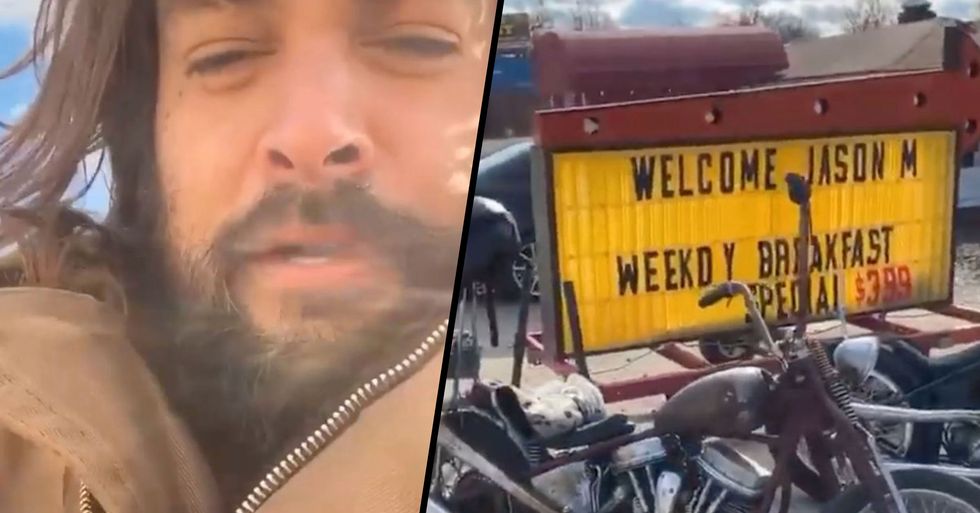 When you think of Jason Momoa, you probably think of him as a semi-untouchable, rich and famous Hollywood actor.

But there is so much more to Momoa than one would expect, and it turns out that he's a pretty decent guy.

He stopped by a small-town diner recently after a sign caught his attention, and the outcome was amazing.

Despite his Hawaiian heritage, Momoa was primarily raised in Iowa.

The 2 seemingly opposite characters developed real feelings for each other and their relationship became one of the cutest and most genuine love stories in the show.

Momoa is also a man of many talents.

He has an equally exciting personal life...

And just when we thought Momoa couldn't get any better...

He is amazing with his fans.

Unlike a lot of celebrities...

Momoa actually takes the time to interact with his fans and give them a memorable experience.

He is currently shooting a new movie called Sweet Girl for Netflix in Pittsburgh, and the shooting was moved out to Fayette County.

A local diner heard of the news that Momoa was going to be in town...

The diner, Rinnie's Place, is located on Route 51 decided to take action. The owner left a very public message for the actor on the billboard outside.

The owner wanted to make sure that Momoa would notice it...

He most certainly didn't!

He took to his Instagram story to take a snap of the billboard, and he even joked about the "expensive" breakfast - it said $399 instead of $3.99.

Momoa rocked up with his signature chopper, and the staff noticed him immediately.

He posted a video of himself walking up to the sign and shivering in the cold... He really risked it all for that breakfast! "Check this out. Ridin' with the boys. Hell yeah, I'm gonna eat here!"

He even posed for a photograph with the lucky owner...

Speaking to her local news station, she said, "My daughter and I are humbled and grateful for all the attention we have been getting because Jason Momoa saw our sign and stopped in for breakfast."

Momoa was simply lovely. "He and his crew are wonderful people and we have enjoyed our time with them. They are more than welcome to stop back anytime they are in town," she went on to say.