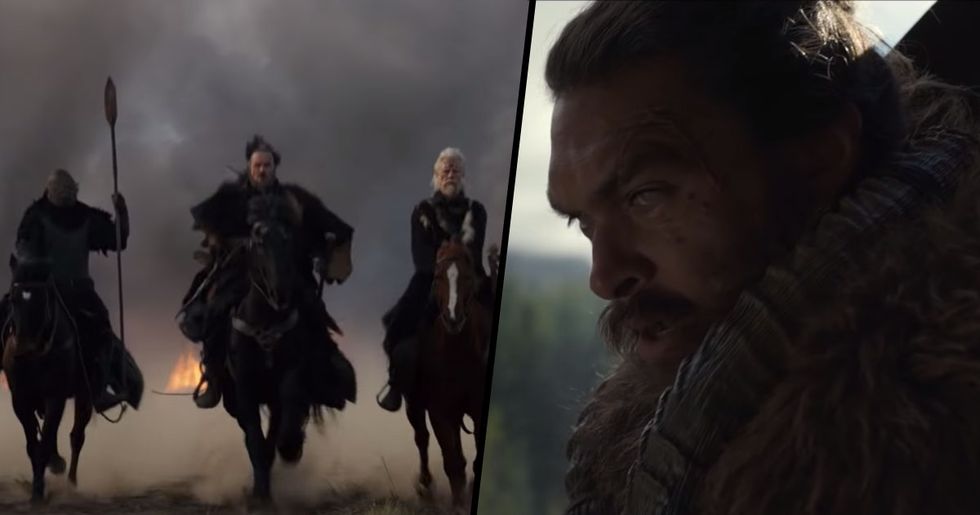 It's been a few months since fantasy series, Game of Thrones, aired its final ever episode, leaving millions of fans across the world with a Game of Thrones shaped hole in their lives.

For many people who's favorite show has just ended, it feels like nothing will ever be able to replace it. But for fans of the beloved fantasy series, that may be about to change...

Last night, Apple had their annual event wherein they unveil all of the latest products that the company is releasing, which dedicated fans will inevitably rush out and buy. But the tech giant also gave fans a glimpse of the star-studded line-up of shows hitting its streaming platform, Apple TV Plus - and Jason Momoa has landed himself the leading role in a brand new show which is set to fill the Game of Thrones void in your life.

The brand new series sees the star in what he calls the "toughest role of his career." Keep scrolling to watch the trailer.

Game of Thrones closed its doors in May.

HBO's fantasy series came to an end after a successful 8-season run.

Fans of the show were devastated to see it go.

The show had become a top-pick within the fantasy genre, with millions of fans across the globe tuning in to get their fix.

Although the finale did somewhat flop...

The long-anticipated finale episode didn't live up to expectations.

In fact, the finale disappointed fans so much that it received the lowest-ever ratings.

In the U.S. alone, over seventeen million viewers tuned in to watch the final episode “The Iron Throne," but it seems like they weren't impressed - taking to imdb to award the finale low marks. The episode has an overall rating of 4.2 out of 10 – which is pretty dire compared to the others, which have earnt respectable 8s and 9s.

Either way, there's no doubt that fans were sad to see the show go.

It's left many of us with a Game of Thrones void in our lives.

But fans can finally wipe away their tears...

There's a new show heading our way that will cure those post Game of Thrones blues, and it stars no other than Jason Momoa.

The actor starred as Khal Drogo in Game of Thrones.

The Hawaii-born-forty-year-old played the barbarian leader of a tribe called the Dothraki and attracted a whole new wave of fans to the show.

His new venture is being brought to screens by Apple TV.

Apple revealed a star-studded line-up of original content for the platform.

The star's new post-apocalyptic show, named See, comes courtesy of Peaky Blinders creator, Steven Knight, and is giving us all of the Game of Thrones vibes we need right now. Don't worry, we've got the trailer coming up very soon.

Set in the far future, the series takes place after a virus has decimated mankind.

Those who managed to survive the deadly virus have emerged without their sight.

Jason Momoa stars as fearless leader, Baba Voss, a father of twins with the magical gift of sight.

Born centuries after the virus hit, the twins are miraculously born with the ability to see, unlike their human counterparts... hence the name.

Voss has to protect his tribe against an evil force.

An extremely powerful, yet desperate queen believes that the twin's gift is the result of witchcraft and wants them destroyed.

The new show is costing Apple a hefty amount.

According to The Wall Street Journal, each episode of the new show's 10-episode first season has cost Apple an eye-watering $15 million per episode, which is the same budget that Game Of Thrones received for its 6-episode final season.

But, despite the high price, Apple aren't charging us a fortune to watch...

The streaming platform, which is set to launch later this year, will cost just $4.99 per month following a week's free trial.

But some people can get their hands on the service free for an entire year.

Customers who buy the new iPhone model will get access to Apple TV plus without having to pay a penny for a whole year.

We don't know about you, but we're very excited for the launch.

All of Apple's original content looks tempting, but Momoa's high-intensity series has the ultimate binge-watching factor.

Fans seem eager to have Momoa on their screens again.

Following Apple's event, people have flocked to Twitter to express their excitement.

See premieres on Apple TV+ when the streaming service launches on Friday 1 November. While we wait for its long-awaited launch, we presume that you're probably still using Netflix for all your binge-watching needs. If that's the case, keep scrolling to see everything added to the platform this month.