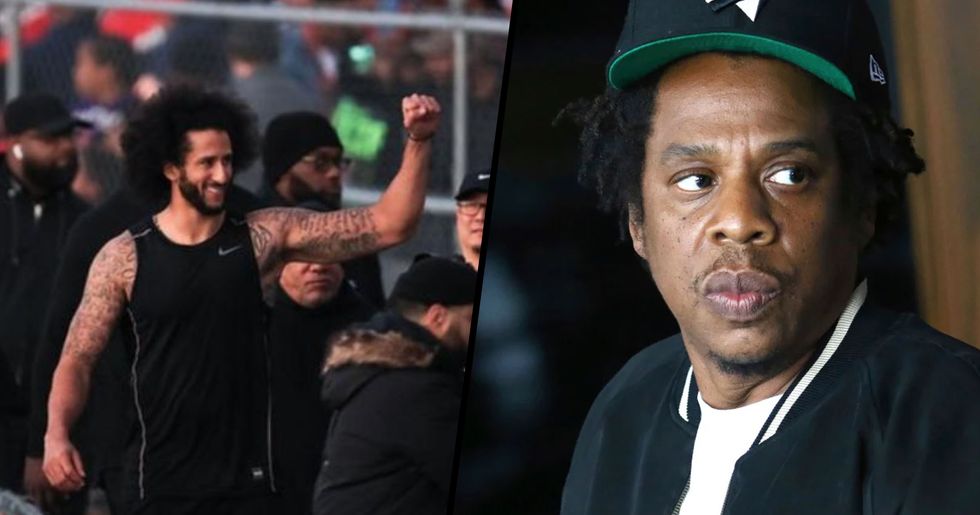 Jay-Z Disappointed Colin Kaepernick Made His Workout a ‘Publicity Stunt’

Colin Kaepernick is one of the more controversial figures in sports to date. Since he took to kneeling for the national anthem in 2016, he's been making more headlines off the field than on. And a major reason for this is that, in spite of the star's clear talent, he's been deemed too much of a liability, and he's had a lot of trouble getting signed.

But the NFL extended an olive branch of sorts, organizing a workout for Kaepernick in order to showcase his talents. Kaepernick, though, never one to play by the rules, instead chose to host his own workout.

Jay-Z has spoken out against Kaepernick's decision, suggesting his motives may not be as noble as he wants to suggest. Whose side are you on? Scroll on for all the details...

Colin Kaepernick was born in Milwaukee in 1987.

He's a  former quarterback-turned-activist who is probably best known for protesting against the systemic racism against African-Americans.

He played college football at the University of Nevada. Kaepernick was then selected by the San Fransisco 49ers in the second round of the 2011 NFL Draft.

But that's not really what he's best known for.

In spite of his incredible talent and dedication as an athlete, Kaepernick really hit the headlines for political reasons.

Because he was one of the first to famously "take the knee."

In 2016, during a 49ers preseason game, Kaepernick refused to stand for the U.S. national anthem and instead remained firmly on his knee.

His decision to kneel was a political protest.

Kaepernick wanted the world to know he did not agree with the ways police in the USA were treating African-American men.

Speaking in an interview in 2016, Kaepernick said: “To me, this is something that has to change, and when there’s a significant change and I feel like that flag represents what it’s supposed to represent and this country is representing people the way that it’s supposed to, I’ll stand."

Kaepernick explained he "couldn’t show pride in a flag for a country that oppresses black people and people of color."

And his actions attracted a massive amount of media attention at the time - which is still ongoing.

Initially, the NFL released a statement claiming that players were only encouraged, and not required, to stand during the national anthem.

But then they released a harsher (and more controversial) statement.

Here it is in full.

If any players chose to take the knee, the team would be fined and the decision would be upon the team leader whether or not they punish that particular player. For many, this felt pretty shady.

Kaepernick's career suffered as a result of his activism.

In 2017, Kaepernick became a free agent. No team would offer him a contract, which he believed was a direct result of his campaign.

However, his career has flourished in other ways.

In spite of no longer being able to play football professionally, Kaepernick has become something of a public figure, even landing deals with brands like Nike.

He's got friends in high places in terms of political activists, including When They See Us director, Ava Duverney.

But some fans want to see him back doing what he does best.

For socially consciously NFL lovers, the fact the Kaepernick continues to be boycotted by teams is something of an embarrassment to the sport.

But earlier this month, the NFL extended an olive branch.

The league organized a workout for Kaepernick in order to allow him to show off his talents and potentially find a new team to play for.

The NFL informed each team about the workout session.

Alongside drills and throws, it was intended to allow potentially interested teams to interview the star.

Many teams are in need of a talented QB.

And Kaepernick's talent is hard to deny. Even during his time off, he's been training hard and staying game ready.

In spite of his controversies ...

Others embroiled in the kneeling scandal still have a place in the NFL. Kaepernick's ex-teammate Eric Reid is playing for the Carolina Panthers and continues to kneel during the national anthem.

But Kaepernick had an issue with the NFL-organized workout.

He claimed the workout would not allow any media presence - and that's something that was clearly important to the athlete.

So Kaepernick made a controversial decision.

Instead of attending the NFL-organized workout, he instead chose to host his own. He claimed to want total transparency - including openness to a media presence.

His workout took place this weekend.

And it certainly seems to have attracted the media attention Kaepernick was hoping for.

But not all of the response has been positive.

And one famous face who has spoken out against Kaepernick is music sensation Jay-Z.

It seems he's disappointed with how Kaepernick has handled the situation.

According to sources, Jay-Z believes Kaepernick has turned down a genuine opportunity offered by the NFL, saying he "turned a legitimate workout into a publicity stunt."

And his sentiment has been echoed by others.

It seems many NFL fans believe Kaepernick is attention-hungry, and not as focused on the game as he claims.

And as for Kaepernick's sporting prowess?

Well, it seems reviews are mixed, with some claiming he's back on his best form, while others say he's not looking that great. Will any of the teams choose to sign him? Only time will tell. Want more Kaepernick action? Scroll on for the heartwarming way he spent his thirty-second birthday.