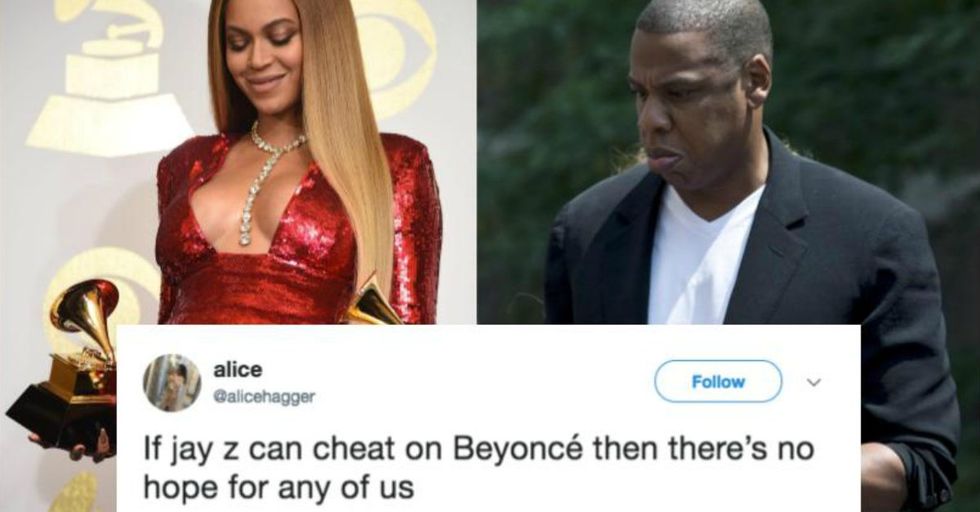 After Beyonce's groundbreaking album, 'Lemonade' came out in April of 2016, people suspected that Jay Z had cheated on Beyonce. No one had really confirmed or denied the rumors after the album's release, but it was clear that Beyonce was throwing major shade and calling *someone* out in a big way. Then, when Jay Z released his album '4:44', these rumors grew stronger as people thought that he had referenced the suspected cheating in the title track. Now, Jay Z has finally admitted to cheating on Beyonce and opened up on how it happened.

Jay Z opened up about his marriage, music, and what it is like to be a black man in Trump's America in a New York Times interview.

You can tell Jay Z really grew from therapy. Talking about race and responsibility, legacy and a mans ability to co… https://t.co/GiFWTFjCJQ
— Shanika W-M (@Shanika W-M)1512047963.0

He got unexpectedly honest and revealed that he'd been struggling with different issues for a long time. He told the New York Times about his experience with therapy:

I grew so much from the experience. But I think the most important thing I got is that everything is connected. Every emotion is connected and it comes from somewhere. And just being aware of it. Being aware of it in everyday life puts you at such a ... you're at such an advantage. You know, you realize that if someone's racist toward you, it ain't about you. It's about their upbringing and what happened to them, and how that led them to this point. You know, most bullies bully. It just happen. Oh, you got bullied as a kid so you trying to bully me. I understand.

People were impressed by his honesty and the fact that he talked about how helpful therapy can be.

Jay Z said that it wasn't until he went to therapy that he realized why someone would act the way that he did. He said that after he talked through with a therapist, he was able to see situations with more empathy and realize that people react certain ways because they are hurting.

He went on to say that specifically, a lot of the fights that he had seen while growing up started because someone was hurting.

He saw a lot of fights, outbursts, and disagreements differently after going through therapy. He taked about specific times where fights on the street started because someone got angry because they thought someone else was looking at them. He said,

You don't want me to see your pain. You don't ... So you put on this shell of this tough person that's really willing to fight me and possibly kill me 'cause I looked at you. You know what I'm saying, like, so ... Knowing that and understanding that changes life completely.

It helped him realize where his own emotions and others' emotions were coming from.

He talked about how his upbringing would be much different than kids'.

He's trying to make sure that they grow up being loved and learn how to have empathy for other people who don't have as much as they do. He doesn't want them to have to struggle as much as he did, but he wants them to understand that not everyone has the advantages that they do because he is their dad.

Here's what Jay Z said about the circumstances leading up to him cheating on the queen that is Beyonce.

The Carters didn't sit down and have a conversation about what they each had revealed about their relationship in their albums, but instead used the music as a sort of therapy session.

Jay Z explained, "It happened — we were using our art almost like a therapy session. And we started making music together." He said that it was definitely difficult listening to each other's work and confronting their emotions about the situation. He said "[it was] Very, very uncomfortable, but [...] the best place in the, you know, hurricane is like in the middle of it...We were sitting in the eye of that hurricane." He concluded, "The best place is right in the middle of the pain."

He said that he was proud of the music Beyonce was making, even though much of it was talking about her anger at him.

"And, you know, at the end of the day we really have a healthy respect for one another's craft. I think she's amazing," he said.

Jay Z said that he is thankful that his marriage is still intact after they faced the obstacle of his infidelity.

Even though many people are praising Jay Z for his honesty, others are still infuriated at him for cheating on his wife in the first place.

Either way you see that issue, you've got to give Jay Z props for endorsing therapy and the way that it can positively affect peoples' lives. There's still so much stigma tied to therapy and mental illness, so it is refreshing to hear celebrities remind us that therapy is helpful and always a good thing. Everyone should go to therapy. Read the interview in full here.