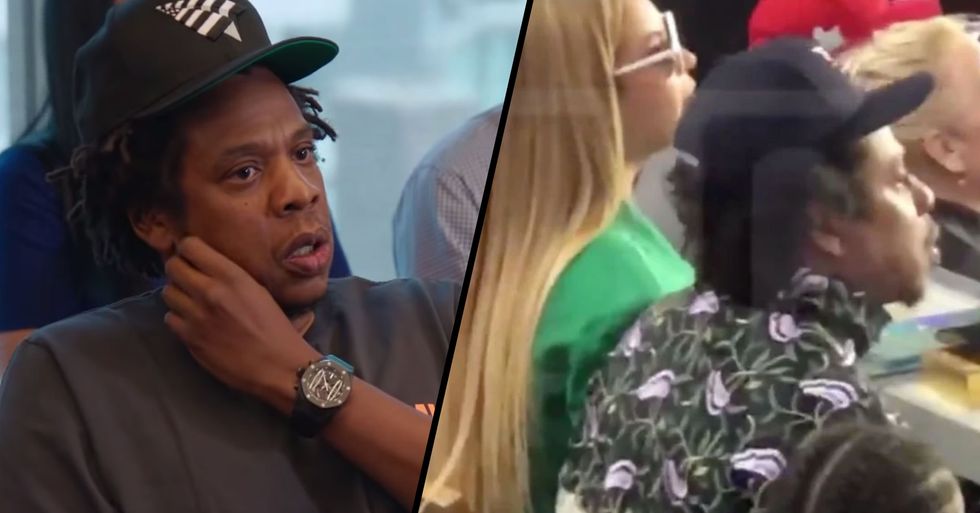 The biggest night in the sporting calendar has passed once again. This week, The Kansas City Chiefs took on the Francisco 49ers in the 54th annual Super Bowl at Hard Rock Stadium in Miami Gardens, Fla.

But it seems one famous couple stirred up some controversy over the evening. And now Jay-Z has explained the reason behind his and Beyonce's contentious move.

The biggest date in the sporting calendar rolled around for the 54th time this week.

Shakira and J-Lo took on this year's halftime show

Demi Lovato has taken on the national anthem - making this her second major music event in recent weeks after her emotional Grammys performance.

But it seems one famous couple has been whipping up controversy.

Jay  Z, Beyonce, and their daughter, Blue Ivy, were slammed for failing to stand during the national anthem.

The Carters were sitting together a few rows back from the field...

And they showed no signs of standing during Demi's performance.

Many people deem it disrespectful not to stand during the national anthem, so it's safe to say the couple has rubbed many fans up the wrong way.

But Jay-Z has now explained the controversial move.

And apparently, it had nothing to do with politics - and everything to do with Demi! Jay-Z explained, "What happened was, we got there, we were sitting, and now the show’s about to start. My wife was with me and so she says to me, ‘I know this feeling right here.’ Like, she’s super-nervous because she’s performed at Super Bowls before. I haven’t."

“So we get there and we immediately jump into artist mode … now I’m really just looking at the show. Did the mic start? Was it too low to start? … I had to explain to them as an artist, if you don’t feel the music, you can’t really reach that level."

"So the whole time we’re sitting there, we’re talking about the performance, and then right after that, Demi [Lovato] comes out and we’re talking about how beautiful she looked, and how she sounds and what she’s going through, and her life — for her to be on the stage, we were so proud of her. And then it finished and then my phone rang. And it was like, ‘You know you didn’t …’" "Blue was right next to us, we wouldn’t do that to Blue and put her in that position." Want more Super Bowl controversy? Scroll on for Jason Momoa's bizarre commercial.