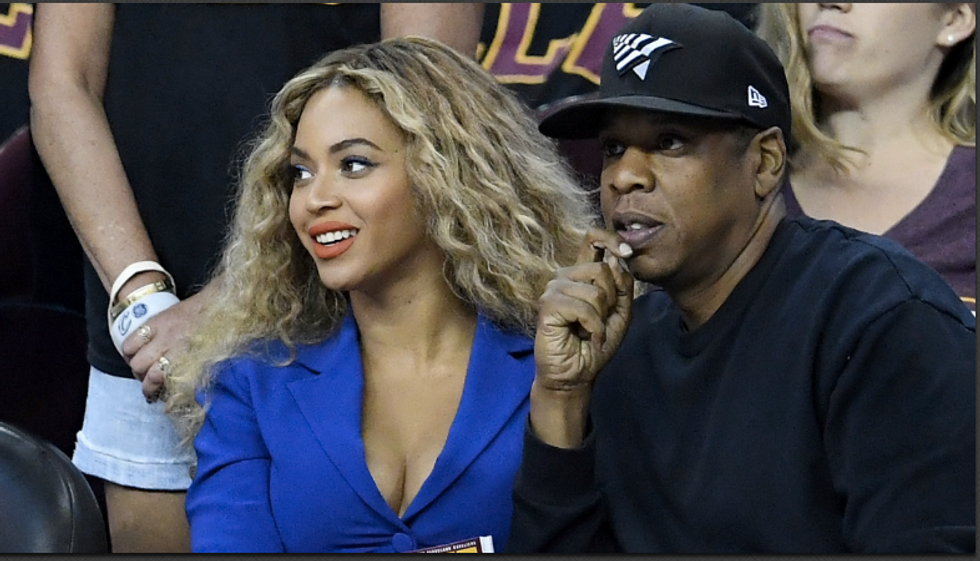 Jay-Z Reveals Bombshell About His Marriage To Beyoncé

Jay-Z’s latest studio album 4:44 is his most revealing work to date. In it, the 47-year-old rapper doesn’t shy away from issues that have plagued his family, from his beef with Kanye West, past contention between himself and sister-in-law Solange Knowles, and, of course, the rocky road to rebuilding trust in his marriage to superstar Beyoncé.

While the lyrics to 4:44 shed light on the rapper’s marital woes, one of his most candid moments appears in a short film titled “Footnotes for 4:44.”

Jay-Z said the relationship wasn’t based on “100 percent truth."

For Jay-Z, that led to a marriage rocked by dishonesty.

“We built this big, beautiful mansion of a relationship that wasn’t totally built on the 100 percent truth, and it starts cracking," Jay-Z said in the Tidal-exclusive video. “Things start happening that the public can see. Then we had to get to a point of ‘Okay, tear this down and let’s start from the beginning.’" The rapper goes on to talk about his life growing up in the Marcy Projects in New York, dealing with violence on a daily basis, but found working on his relationship to be more of a challenge. “Nothing’s harder than this," Jay-Z said. “By far, I’m telling you. It’s the hardest thing I’ve ever done."

The superstar couple has been together for about 17 years.

The pair met in 2000, when Beyoncé was just 18 years old. They kept their relationship private for years, even though they began appearing in each other’s music videos. They married in 2008. Four years later, they welcomed their first daughter, Blue Ivy, to the world. And although no photos have been shared just yet, Beyoncé reportedly gave birth to the couple’s twins last month.

Jay-Z often felt overwhelmed with his feelings about his wife.

He recalls a time when he and Beyoncé were on vacation, and when it came time for her to leave, he felt devastated. “What is happening to my body right now?" Jay-Z said of the unfamiliar feeling. “Did I just say … ‘Don’t leave'? All this is new for me."

Cheating rumors began to swirl about the famous couple in May of 2014.

Leaked video footage of Beyoncé’s sister Solange, physically attacking Jay-Z in an elevator made it seem as though Bey and Jay didn’t exactly have a picture-perfect marriage. While the three released a statement following the incident, noting that they’re a regular family that fights, tabloids speculated that Solange’s outburst toward her brother-in-law was due to cheating rumors.

“Becky with the good hair."

Beyoncé’s ground-breaking visual Lemonade also referenced instances of infidelity. On the track “Sorry," Bey sings "He only want me when I'm not there / He better call Becky with the good hair," seeming to reference one of Jay-Z’s trysts.

Jay-Z addresses both incidents on 4:44.

On opening track “Kill Jay-Z" lyrics “You egged Solange on / Knowin’ all along, all you had to say you was wrong" validate Solange’s elevator outburst. On “Family Fued" Jay-Z raps “Yeah, I'll fuck up a good thing if you let me / Let me alone, Becky." He also appears to blame the stress of his infidelity for Beyoncé’s miscarriage with line “Bey losin’ babies ‘cause their future’s uncertain."

Both the album and short film “Footnotes for 4:44" show a remorseful Jay-Z, who is also very much in love with his wife.

When asked about whether Beyoncé knew about the revealing nature of 4:44, Jay-Z said his wife heard the album early on. The rapper explains that in order for their relationship to survive, they have to be completely honest and transparent. “We just got to a place where in order for this to work, this can’t be fake," Jay-Z said in the video. “Not one ounce."