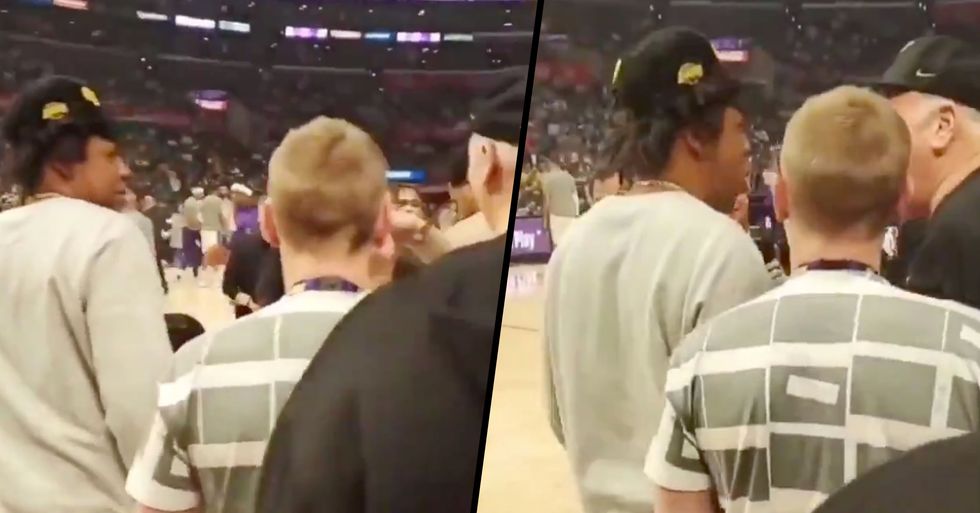 At the Los Angeles Lakers' game on Sunday, a fan got a little too close for comfort to rapper Jay Z, who recoiled away from him in horror when he put his arm over his shoulders.

The awkward interaction was caught on camera and was quick to go viral, with people slamming the fan for his intrusive and inappropriate behavior.

Keep scrolling for the full story, and to watch the cringe-worthy moment for yourself...

Jay Z is one of the most recognizable faces in rap today.

Mainly for his music, and sometimes for the fact that he's married to the Queen B herself, Beyonce.

The musician has done pretty well for himself.

Born as Shawn Corey Carter in Brooklyn's notorious Marcy Projects, Jay Z turned to rap as an escape from the ongoing drug and gang issues in his neighborhood.

In 1989, he collaborated with the rapper, Jay-O, who became somewhat of a mentor to the budding musician.

They recorded the song, "The Originators", which won the pair an appearance on an episode of Yo! MTV Raps.

It was here when he adopted the stage name, Jay Z, which paid homage to his mentor.

For a couple of years, Jay Z remained relatively under the radar until he and two friends, Damon Dash and Kareem Burke, founded their own record label, Roc-a-Fella Records, in 1996.

And it was onwards and upwards from here.

Jay Z released his debut album, Reasonable Doubt, in June that year, which was followed by his 1998 album Vol. 2 ... Hard Knock Life, which scored him a Grammy.

In the following years, Jay Z went on to release a number of different albums that contain iconic hip-hop tracks.

But, putting music aside...

Jay Z is also known for another thing - His relationship with pop sensation, Beyonce.

It is unsure of when exactly the couple met...

But, when Beyonce was still a part of Destiny's Child, she collaborated with the rapper to produce the duet, "03 Bonnie and Clyde", where the pair sang about their boyfriends and girlfriends.

Rumors of their romance intensified when they released "Crazy in Love" in 2003...

And, when asked about their relationship in an interview, Jay Z famously said: "She's beautiful. Who wouldn't wish she was their girlfriend? Maybe one day."

Though the couple never officially confirmed their romance, they were spotted together several times at various social and red carpet events. It was obvious.

They have always kept their relationship low key...

And quietly tied the knot in New York in 2008, famously with no engagement or wedding rings. On the topic, Beyonce once said in an interview, "people put too much emphasis on that. It’s just material, and it’s just silly to me".

And now, fast forward to today...

Jay Z and Bey have become one of the most iconic power couples in the world (cheating rumors aside...).

The family are regularly spotted out and about...

But most frequently at the Los Angeles Lakers basketball games.

Because, as any Jay Z fan will be aware...

He is a huge Lakers fan.

He has made his love for the team pretty well known...

And is regularly spotted courtside at their games.

On Sunday, the rapper was spotted with Blue Ivy once again at the Staples Center...

Nothing out of the usual, I know.

Jay Z was seen mingling with various other celebrities who had also turned out for the heated game...

And players were spotted greeting the rapper and shaking his hand prior to the game.

One fan decided to get a little too close for comfort.

Footage has gone viral of a fan attempting to put his arm around the rapper...

And Jay Z instantly recoiling away, pulling a face of the utmost disgust and discomfort.

The cringe-worthy moment was caught on various different cameras...

Where Jay Z can be seen chatting to and greeting players until a fan sneaks up behind him and puts his arm around his shoulders.

Jay Z is motionless for a moment...

But suddenly recoils away from the stranger, with a look of disgust on his face.

It makes for some pretty awkward viewing...

But the fact of the matter remains - Don't go touching people without their consent. Period.

Here is one angle of the hideous event unfolding...

Twitter users were horrified by the clip, with many condemning the actions of the unidentified fan.

And another angle here...

I can't bear to watch anymore. Let's just hope that this fan will realize the error of his ways, and stop hugging strangers. That is all. For more on Jay Z, keep scrolling to read about his reasoning for cheating on Beyonce...