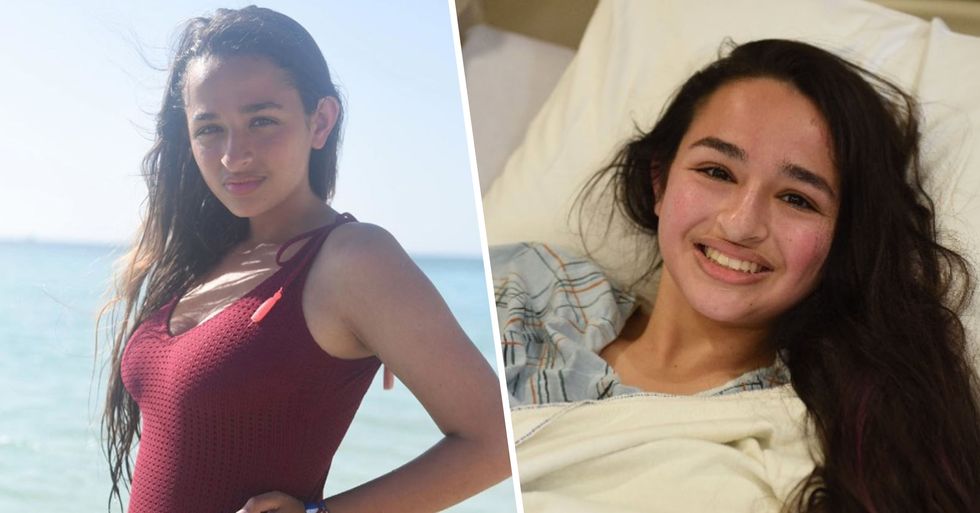 The TV personality, who has lived most of her life identifying as a transgender female, documented her surgery on her television series and was incredibly open with all the complications her surgery brought with it.

Now, she has shared the results of her third gender confirmation surgery.

Jazz Jennings has been making waves in the fight for LGBTQ awareness.

Jazz, from Florida, is one of our countries most famous YouTube and television personalities who also happens to be a transgender woman.

This particular surgery transforms existing male genitalia by reconstructing it into female genitalia, the ASPS says. So, as you can imagine, the procedure would be a long and grueling one.

And she has been incredibly open with the aftermath...

Jazz proudly shared photos of her in a swimsuit, where her surgery scars can be visibly seen on her upper thighs. Captioning her post, which was reflecting on her journey throughout the past year, Jazz wrote, "These are my scars on full display in #2019. I'm proud of my scars and love my body just the way it is. I call them my battle wounds because they signify the strength and perseverance it took to finally complete my transition."

And social media users were quick to praise the star, with many labeling her as an "inspiration." One user wrote,  "You are a model of courage, strength, perseverance and most of all, LOVE", while another commented, "So strong! So beautiful! #goddess."

But, despite how happy she is now...

The operation wasn't all plain sailing.

The surgery proved to be more complex than anticipated...

Due to the fact that Jazz had been receiving hormone blockers and estrogen from such a young age, her surgery was much more complicated than others.

Jazz hasn't, for obvious reasons, spoken much about the details surrounding the surgery complications.

But now, details from her surgery have finally been revealed.

Last month, the sixth season of I Am Jazz premiered...

And her doctors finally opened up about the details surrounding Jazz's complicated surgery.

In the preview, Jazz meets up with her surgeons, Dr. Marci Bowers and Dr. Jess Ting...

And they discuss the complications she has been suffering post-surgery, and the preparations she needs to be making for her third procedure.

It's been a difficult journey for Jazz.

And she can be seen crying out in pain as she gets examined by her surgeon.

The complications have caused the young woman so much pain...

Dr. Bowers explained that Jazz "has had a very difficult surgical course," in the show. "She had a very incredible first surgery - it went seemingly very well, but there were problems. And that prompted a second surgery, which I was not a part of, unfortunately."

And her surgeons admitted that they weren't expecting such severe complications.

"Taking Jazz on as a patient for surgery, we knew it was going to be a one-of-a-kind surgery," Dr. Ting explained. "We don't have the experience of having said we've done fifty of these. I was just not expecting her to have a complication as severe as what she did have."

Sitting down with Jazz and her parents, Dr. Bowers can be seen acknowledging her complications.

“This has been a real journey, hasn’t it? We knew it would be tough — it turned out tougher than any of us imagined," she said, while the rest of the family listened on sombrely.

And she admitted that Jazz should never have been sent home from the hospital in the first place.

“I think in hindsight we would have never sent you home from the hospital. You know, easy to say now. When I wasn’t here when you had problems and had to go back, I can’t tell you how stressful that was."

As for Jazz's parents...

It's been a difficult journey watching their daughter suffer through such serious health complications.

The producers can be heard asking Jazz’s Dad, Greg, if the doctors’ “mea culpa" was important to them under the circumstances.

“You know, it’s nice to hear, ‘I did something,’ and acknowledging that," Greg says. “On the other hand, there’s the medical side and an expectation that really should have been met."

This was far from the end of the journey for Jazz...

Last year, the star announced she was taking a year off from school and deferring her Harvard admission to focus on her mental health.

And during her year break...

It appears that she had undergone her third gender confirmation surgery.

Alongside the picture, Jazz thanked everyone who had supported her through the years.

Her third surgery was for "cosmetics," Jazz explained.

"I’m feeling so great after completing my third surgery! This third procedure was for cosmetics, and I’m super happy with the results. Thank you to everyone who has followed my journey and supported me along the way," she wrote.

Jazz has had an unbelievable journey.

And it's great to see that she's finally on the mend.