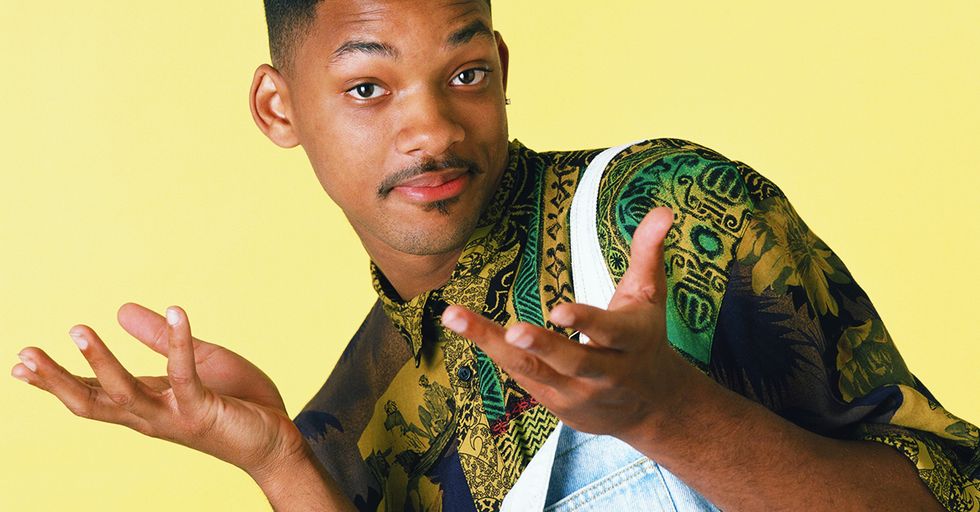 Will Smith gave us one of the most classic sitcoms of all time with The Fresh Prince of Bel-Air. Between his neon shirts and Carlton's...the Carlton, there were so many iconic moments from this show.

And while we know the show pretty well, there's a whole world of behind-the-scenes facts that might surprise you.

We know there was some drama on the show throughout its run. We went through two Aunt Vivian's and a near-cancellation. Here are 19 facts about Fresh Prince that you probably weren't aware of.

Will Smith was in a mountain of debt when he started on the show.

Like, a whole lot of debt. He owed the IRS nearly $3 million, they seized most of the things he owned, and things were looking grim. Then, he started on Fresh Prince, and the rest is history.

Smith was a total novice when he landed the show.

Will Smith had appeared in only one TV production before he was cast on Fresh Prince. He played a t-shirt salesman on an ABC after-school special.

That meant that Smith wasn't the best actor when the show started.

In fact, NBC almost fired him because of how bad an actor Will Smith was in the beginning episodes of The Fresh Prince of Bel-Air. He frustrated his co-stars, and he's still pretty embarrassed about his performances in those early episodes.

Quincy Jones, executive producer of the show and legendary music producer, played the cab driver in the opening credits.

How rad is that?! Bet you've watched those credits a million times and never noticed. The next one also has to do with the show's iconic opening credits.

The house in the credits isn't actually in Bel-Air.

It's called movie magic, y'all! That beautiful white mansion in the credits isn't actually in Bel-Air, it's in the adjacent neighborhood of Brentwood. Who'd a thunk?

The show was nearly canceled after the fourth season.

But fans wrote letters upon letters to Will Smith and NBC, and they were persuaded to keep the show going. Viral fan campaigns happened even before the Internet was widely used!

Tyra Banks made her acting debut on Fresh Prince.

The woman is a powerhouse, but before she was famous, she appeared in a season four episode of Fresh Prince. She played Will's girlfriend, Jackie.

Geoffrey had a last name.

It was Butler. No joke. His full name was Geoffrey Barbara Butler.

The Carlton was inspired by Courteney Cox and Eddie Murphy.

Way back in the day, Courteney Cox appeared in the music video for Bruce Springsteen's "Dancing in the Dark." She gets pulled up on stage and basically starts doing the Carlton. Alfonso Ribeiro was inspired by that dance as well as Eddie Murphy's "white man dance" from his Delirious comedy special when he was creating the Carlton. The next one will warm your heart!

Will Smith met Jada during auditions for the show.

Jada Pinkett-Smith auditioned for the role of Will's girlfriend in Fresh Prince. While she didn't snag the role, she snagged Will's heart, and the rest is history.

The whole cast kept a diary on set.

Karyn Parsons, who played Hilary, told ABC News about a notebook that was kept in a drawer of the set's kitchen island. Everyone, including the actors, cameramen, and crew members, would write funny poems or notes or feelings in this one notebook. Parsons took it with her when the show ended.

The Fresh Prince of Bel-Air is the chosen entertainment for the prisoners of Guantanamo Bay.

Until 2012, Harry Potter was the most popular, but Fresh Prince took over. Why? It's not exactly clear.

The show had its own sneakers.

They were called the Air Jordan 5 Bel Airs. And they were awesome.

Four actors appeared in every single episode of the show.

Will Smith, Alfonso Ribeiro, Karyn Parsons, and James Avery are the only cast members who were in every single episode of Fresh Prince. The next one might get you to sing.

Uncle Phil's law firm's name is a tribute to one of Quincy Jones' favorite bands.

It's called Firth, Wynn, and Meyer, which, you may realize, sounds a lot like Earth, Wind, and Fire.

Even though his character's name in the show is William Smith, Will Smith's real name is Willard Smith. Who knew?!

Both Smith and Ribeiro worked behind the scenes on Fresh Prince.

The show's soundtrack was only released in the Netherlands.

But don't hop a plane just yet! You can now find the album online.

Will Smith and Alfonso Ribeiro came up with their characters' names.

Ribeiro warned Smith to choose carefully because if the show was a hit, he might get called that name forever. Will Smith got creative and named his character...Will and Ribeiro chose the now iconic Carlton. Share this with the biggest Fresh Prince fan you know!