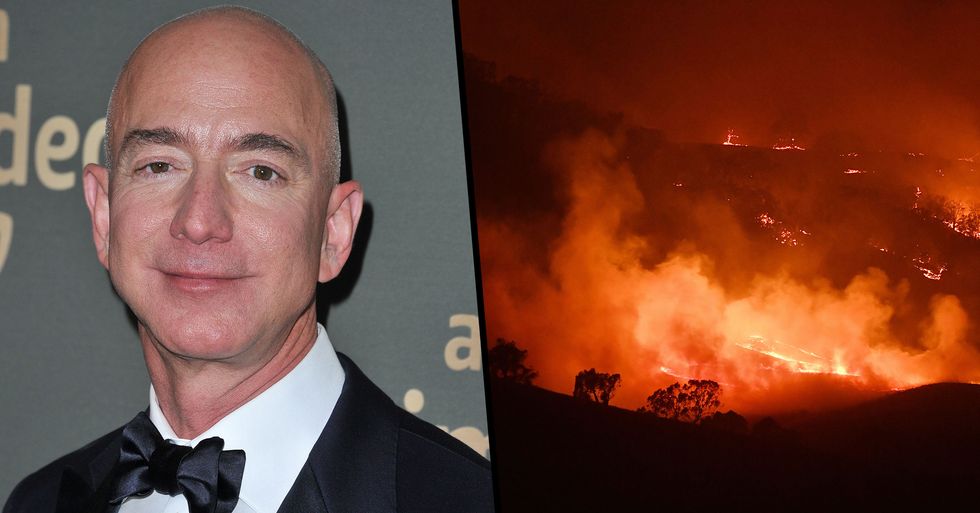 Amid the bushfire crisis currently burning across Australia, a number of different celebrities and high-profile figures have been pledging generous sums of money towards helping the struggling country and its people.

And the latest figure to donate is Amazon CEO, Jeff Bezos, who has pledged $690,000 towards the cause. However, people are not impressed and are all saying the same thing about his "embarrassing" donation...

There have been fires reported in every state, but New South Wales is truly taking a beating by bush fires and is undoubtedly the hardest hit. More than 5,900 buildings have now been destroyed.

The BBC reported that close to sixty bush fires continue to burn in populated coastal and inland regions to the city's north.

A staggering number of animals have died as a result of the fires.

Over a billion animals have now died.

Australia has been forced to make a global call for help...

And now, many famous faces have joined the fight.

A number of celebrities have been sharing their wealth with the struggling country.

A tremendous amount of money has been raised so far...

Celebrities such as Hugh Jackman, Elton John, and the metal band, Metallica have put forward hefty donations towards the cause, and a full concert, which will give all proceeds towards helping the bushfires, has even been organized by the Australian comedian, Celeste Barber.

The high volume of generosity from celebrities and members of the public, alike, has been truly heartwarming.

And millions of dollars have now been raised as a result of people's kindness and generosity.

And the latest celebrity to make a donation is Amazon CEO, Jeff Bezos.

Bezos, who has been ranked as the richest man in the world with a net worth of over $110 billion, has, quite surprisingly, joined the star-studded bill of generous donators.

Now, his donation comes as a bit of a surprise...

Because Bezos doesn't have the best track record when it comes to sharing his wealth... Or with his ethics, for that matter.

And, over the last couple of years, more and more stories of Amazon workers being forced to work unethical hours for ridiculously low wages have been emerging.

It emerged that staff members were being forced to work over sixty hours per week...

While the starting pay for these workers was as low as $10 an hour. Statistics showed that, in 2017, the median Amazon employee earned just under $28,500, according to company filings - Bezos earned $1.7 million that year.

Despite Amazon being one of the most valuable companies in the world, valuing in at nearly $800 billion and pulling in $232.9 billion in global revenue in 2018, they paid absolutely nothing in federal tax last year.

Bezos is a pretty controversial figure in the business world, and many have slammed the CEO as a "selfish" and "evil" man.

But he must have been feeling unusually generous this week...

Because the business tycoon took to social media over the weekend to announce that he had, in fact, pledged a donation to the cause.

“Our hearts go out to all Australians as they cope with these devastating bushfires," Bezos wrote on his Instagram account. “Amazon is donating 1 million AU dollars in needed provisions and services."

But people are not impressed.

While $690,000 may seem like an eye-watering sum to most of us, it is merely a smidgen of what Bezos brings in on a daily basis... 3 minutes worth of work for him, to put it into perspective.

Many have called out the CEO for his donation...

Which is an embarrassingly small sum when you put his net worth into perspective, like this Twitter user above pointed out.

Many have compared his measly donation to charitable acts made by other celebrities...

Like Nick Cave, who made a very similar donation with a net worth of $8 million... Which is nothing next to Bezos' $110 billion.

And others pointed out his previous spending habits...

$10 million on an advert, but only $690,000 on a burning country in dire need of help? Something's not quite right here.

It's hard not to compare Jeff's half-hearted donation to that of others...

Keep scrolling to see who else donated, and how their generosity compares to the multi-billionaire's sorry excuse of a donation...