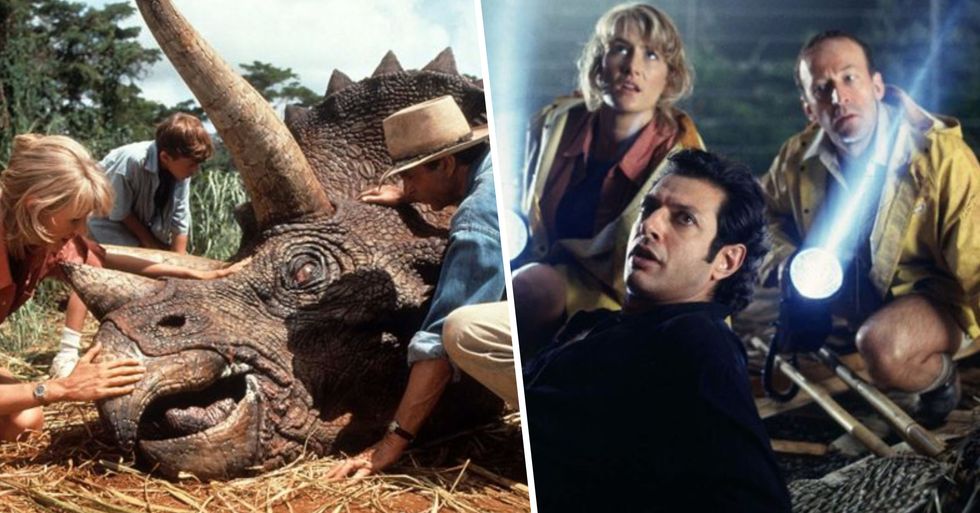 Last year, Jurassic World: Fallen Kingdom hit the box office to impressive figures, marking the penultimate installment of the dinosaur sequel franchise. Since the release, fans of the trilogy have been left eagerly awaiting details on the third and final movie.

Up until now, information has been scarce, but this week, it's been confirmed that Jurassic Park's original trio, Jeff Goldblum, Laura Dern, and Sam Neill will be starring in the upcoming Jurassic World 3.

And no, this isn't your typical cameo role... the iconic trio are set to reprise their original roles - marking the first time since the '90s that the actors have starred alongside each other.

Keep scrolling to get the full scoop on the exciting announcement.

Steven Spielberg's Jurassic Park franchise kicked off in the '90s.

The sci-fi adventure movie hit the box office on June 11, 1993, opening to a staggering reception.

The blockbuster is based on the 1990 novel of the same name.

The movie tells the story of a group of scientists who visit an island theme park populated by dinosaurs. The dinosaurs residing in the park (which, you guessed it, is named Jurassic Park) have been created and cloned using pre-historic DNA.

Those selected to tour the island are assured that it's completely safe.

The park's billionaire mastermind, John Hammond, head of bioengineering company, InGen (aka the ones who created the theme park), appears confident in his creation. But, of course, it doesn't quite work out like it should...

A power cut in the theme park leads to chaos.

A tropical storm on the island causes the tour to be cut short, but the park's computer programmer begins to sabotage the security systems leading to a power cut... meaning the dinosaurs escape.

The movie then follows the race for survival as the creatures roam free.

And it's down to the group of scientists to try to protect the park's founder's grandchildren from getting in the path of the predators and make it to the mainland... alive.

To say the movie was a huge hit is probably an understatement.

To date, the movie has grossed an estimated $1.029 billion at the box office, making for pretty eye-watering figures.

It's a classic in its own right.

And its profound success initiated an entire franchise to be born from it.

A second movie, The Lost World: Jurassic Park hit the big screen in 1997, followed by the third installment in 2001, Jurassic Park III, marking the end of the popular dinosaur trilogy.

It's one of the highest-grossing franchises of all time.

As of 2000, the movies had already generated a whopping $5 billion in revenue.

Fourteen years after Jurassic Park closed its doors for good, the Jurassic World movies were created.

It's set twenty-two years after the events of Jurassic Park.

Jurassic World takes place on the same fictional island as Jurassic Park and centers on the Jurassic World luxury resort, which provides residence for an array of genetically engineered dinosaurs. But, when one of the massive creatures escapes, it sets off a chain reaction that causes the other dinosaurs to run riot.

But despite its wobbly reception, it still managed to rake in a staggering $1.308 billion at the box office, so it wasn't all bad.

Fans of the franchise will be pleased to know a third instalment is confirmed.

As of now, the title remains unknown but the movie is set to be the concluding installment of the Jurassic World trilogy. But, details have been scarce, and in terms of an official plot, information is yet to be released.

But there's some very exciting news...

This week, Jurassic Park's original scientist trio, Jeff Goldblum, Laura Dern, and Sam Neill have been confirmed to star in the upcoming movie.

And no, it won't be a token cameo appearance...

The trio is set to reprise their roles as Dr. Ellie Sattler, Dr. Alan Grant, and Dr. Ian Malcolm.

It's the first time since Jurassic Park's original release in 1993 that the actors will star together.

Dern reprised her role as Dr. Ellie Sattler and Neill reprised his Dr. Alan Grant role in 2001’s Jurassic Park III. Goldblum went solo to reprise his role as Ian Malcolm in 1997’s The Lost World: Jurassic Park, and again in last year’s Jurassic World: Fallen Kingdom. But the 3 haven't starred together since they originated their roles in 1993.

It's got people pretty excited for the movie's release...

Including actress, Reese Witherspoon, who took to Twitter today to express her joy at the news. We have to admit, it is a pretty big reason to watch.

So, when will Jurassic World 3 hit the big screen?

The movie is expected to land on June 21, 2021, so we've still got a little bit to wait before we re-enter the dino island. In the meantime, keep scrolling to read more about another hugley popular reboot that will also be hitting screens in 2021.