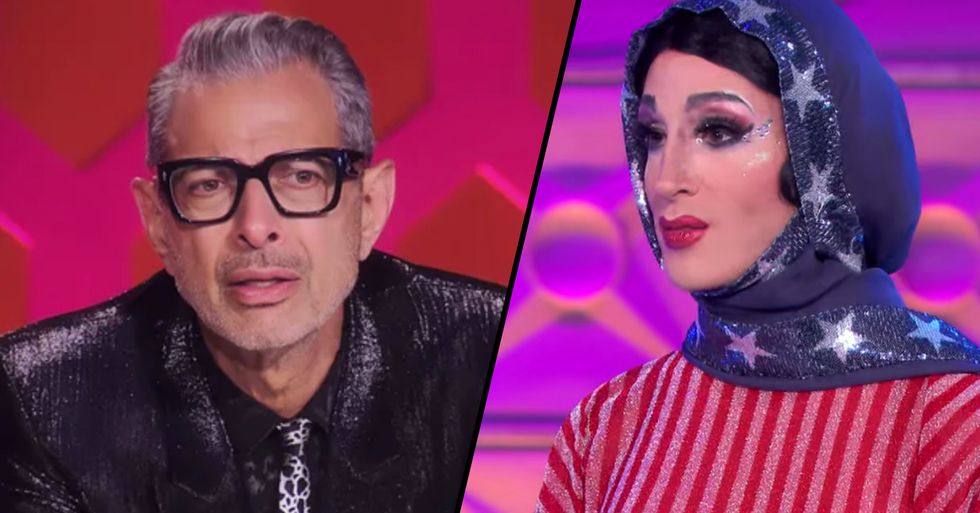 A recent appearance on RuPaul's Drag Race has landed the celebrated actor, Jeff Goldblum, into some seriously hot waters after he asked a controversial question about Islam.

Since airing, the episode has been quick to go viral, and fans have been left divided as to whether Jeff was being Islamaphobic, or whether he was simply asking a valid and innocent question.

Keep scrolling for the full story, and to decide on the matter for yourself...

So far, Jeff Goldblum has been one of the less problematic figures in Hollywood.

But hey, 2020 has been throwing all kinds of things our way, so why not put one of our most beloved actors in the center of an Islamaphobia scandal?

Because, before all of this, Jeff couldn't do anything wrong in the eyes of his adoring fans.

The actor has been intriguing audiences for decades now, with his famously peculiar speaking cadence and natural good looks quickly gaining him a loyal fanbase.

He has starred in a number of Hollywood blockbusters...

The Fly, Independence Day, and Thor, just to name a few.

But most of us will know and love the actor from the 1993 classic, Jurassic Park.

Who can forget his portrayal of the intelligent Dr. Ian Malcolm in the Jurassic franchise?

Or simply this iconic photograph?

Which you may know from one of the thousands of memes currently circulating the internet...

And, on top of his skills as an actor...

Jeff has also been loved for his down-to-earth character, which can be credited to his humble beginnings.

The actor has always remained proud of his roots...

And has publicly discussed the odd jobs he used to work in order to make ends meet prior to his big break, such as selling pencils to prisoners in California.

He is also part of a jazz band.

Jeff is part of an ensemble jazz group, the Mildred Snitzer Orchestra, that meets in various music venues across LA on a weekly basis. Here, the actor is known for mingling with the crowd and chatting to customers during these semi-regular gatherings.

After all that, I know what you're thinking...

What's not to love about this guy?

Well, many fans' opinions on the actor have turned a little sour this week.

Jeff appeared as a guest judge on RuPaul's Drag Race, where he commented on and critiqued contestants’ performances during a "Stars and Stripes"-themed runway challenge in the 9th episode. So far, so good, right?

Well, Jeff has come under fire for a certain question he poised to a contestant representing the Islam faith.

During the challenge, Iranian-Canadian contestant, Jackie Cox (real name Darius Rose) walked the runway in a red and white-striped kaftan and a starred hijab; a look that she believes demonstrates that "you can be Middle-Eastern, you can be Muslim and you can still be American."

He began by asking:

"Are you religious, may I ask?" Jackie then replies: "I'm not and, to be honest, this outfit really represents the importance that visibility for people of religious minorities needs to have in this country."

But his second question brought with it a lot of controversy...

So much so that, for the first time in his career, people have been turning against him and labeling him as "Islamophobic."

Shortly after the episode aired on Netflix, Twitter became a Jeff Goldblum minefield.

wait i just watched drag race and what the fuck was up with jeff goldblum being randomly islamaphobic out of nowhere that was awful???
— ellie 🧸 (@ellie 🧸)1587845032.0

And not in a good way.

People are furious with his "racist" question.

Jeff Goldblum is in Islamaphobic, and everybody who tries to justify his actions is Islamaphobic as well. Millions… https://t.co/fXercvMI5c
— bipolewhore (@bipolewhore)1587827923.0

This is probably the first time that the actor has come under such fire, and there are no signs of it cooling down anytime soon.

The backlash has been relentless...

And some have even called for straight judges to be taken off the show completely... Which is completely ridiculous, if you ask me.

Now, I know what most of you are thinking...

What exactly did Jeff ask that caused such an internet uproar?

Well, here it is.

Jeff, whose tone remained light and passive the entire time, quizzed Jackie further. "Is there something in this religion that is anti-homosexuality and anti-woman? Does that complicate the issue? I’m just raising it and thinking out loud and maybe being stupid."

And, while nodding in agreement with him, she said, "No, no. I agree, I think that drag is always shaking the tree, so to speak, and there are so many different layers to this presentation, and if it were ever to be done, this is the stage to do it."

But, despite all the backlash, many have jumped to the actor's defense...

@GayMuslimMY Islam has such a wide spectrum and too bad Jeff Goldblum only knows the extreme side of Islam. We cann… https://t.co/v7paCsUP0F
— Iz_cHIValrous (@Iz_cHIValrous)1587990811.0

Was Jeff really being Islamaphobic? Or was he simply asking a question as someone outside of the Islam faith?

Other people have argued that the actor wasn't being Islamaphobic...

I don't agree that #JeffGoldblum is islamaphobic. He asked a question in a respecful way with the intention of lear… https://t.co/SFJWSTZKVA
— Paula G (@Paula G)1587893858.0

And they have pointed out that, while attempting to learn about the faith, he remained valiantly polite and respectful.

There's nothing wrong with someone wanting to learn about another culture...

Wig, so #JeffGoldblum actually felt sad for Muslim gays and women but they crucify him for pointing out the big ass… https://t.co/wnMhBlxt25
— ✨Terryrist✨ (@✨Terryrist✨)1587861981.0

Which is what many have argued was simply what Jeff was trying to do.

We need to look at the actual definition of Islamophobia here...

Why are people giving Jeff Goldblum shit for very considerately asking about sexism and homophobia in Islam? It is… https://t.co/QJDXbpeGBR
— Euan (@Euan)1587829732.0

The Cambridge Dictionary defines Islamophobia as the "unreasonable dislike or fear of, and prejudice against, Muslims or Islam." Is this what Jeff displayed? Or was he simply asking a question about her faith?

Many have been defending the actor for simply trying to educate himself.

my favorite thing is jeff goldblum asking about the relationship between the LGBT community and Islam trying to edu… https://t.co/zYANvQ3oar
— spring✨ (@spring✨)1587987194.0

How else will he learn about the faith and the culture unless he asks the questions? More and more people are learning about other people's cultures, and the fight against Islamophobia is apparent - Keep scrolling to read about the first Muslim American women sworn into Congress...