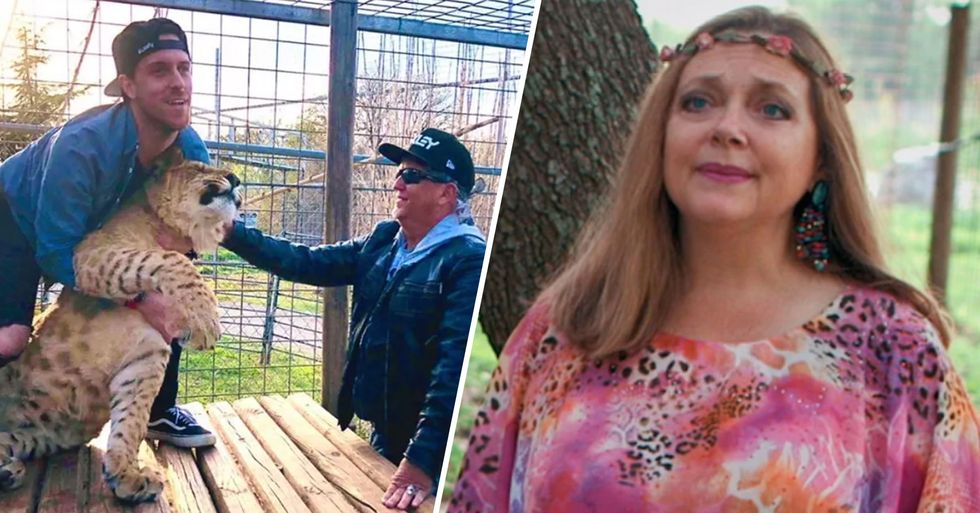 Out of all of the many Tiger King rumors, the one that implies that Carole Baskin is Jeff Lowe's children's biological mother is by far the most extreme.

And now, Jeff Lowe's son has spoken out about this bizarre rumor...

The rumors about the notorious Jeff Lowe being Carole Baskin's ex-husband have really started to get out of hand...

And now, Jeff's son has addressed these rumors himself.

Netflix's docuseries, Tiger King has completely taken over the world since its release a couple of months ago.

The 7-part series, which is based here in the United States, retells the story of a war between a very flamboyant tiger owner named Joe Exotic and his enemy, a Florida-based animal activist named Carole Baskin.

Joe's life, including his 3-way marriage, began to fall apart as the years went on...

And he quickly fell into a downward spiral - causing his obsession with Carole and her husband to grow even bigger.

Joe was sentenced to twenty-two years in prison for attempting to have Carole murdered. He hired a hitman to take Carole out whilst she was biking down a deserted bike path, but the FBI became involved and they thankfully managed to put a stop to this dangerous plan.

But the scandal doesn't end there.

A theory has been circulating on the internet about Carole Baskin's first husband, who mysteriously vanished (or was murdered and fed to the tigers...) over twenty-years-ago.

High-key conman and Las Vegas lothario Jeff Lowe, who is one of the men who not only worked alongside Joe Exotic but who also helped the authorities put him behind bars.

But Jeff decided enough was enough...

And he decided to address the rumors himself back in March.

Because, of course, he did. He replied: "You're a brilliant man and she is not my type. If I was stuck on a deserted island with her, I would f*** a coconut. I've seen the side by side pictures. It looks more like John and Joe's love child." Ouch.

Wrong! Many eagle-eyed fans refuse to believe Jeff's statement and they have continued to accuse the suspicious gambler of hiding his past secrets.

So Jeff's son, Taylor, has decided to step in.

Taylor looks after the Tiger King Park social media accounts and he is very hands-on with the big cats at his dad's park... he's clearly his father's son!

He has also been working at the park during the lockdown...

Speaking to LADBible, he explained, "Yeah, everything is the same as when dad took over. When Joe departed from the park, he kind of went around and picked up all the money cats and the money animals - the ones that were of value to him financially, and he kind of got rid of those."
"I can't really speak of the details because I don't know, when Joe parted ways he took those money cats, they were of value to him, mainly financial value as opposed to a sentimental relationship or that he was going to miss the cat."

It seems that Taylor is fed up with these rumors...

And when asked about them, he said, "It's hilarious, being in the position where I am one of the people in the background of this entire Tiger King thing, it just feels like everyone wants a piece of the story."

Taylor was bombarded with accusations that Carole Baskin was his biological mother.

"I had somebody send me a post of the article, where it said that Carole Baskin is possibly my mother? About ten minutes after it was on YouTube," he explained.

"I can categorically say that Carole Baskin is definitely not my mom. Definitely not." He added, "My dad thinks it's hilarious too."

So that clears that rumor up...

And as for the rest... who knows?! Make sure to keep scrolling to check out the best Tiger King memes...