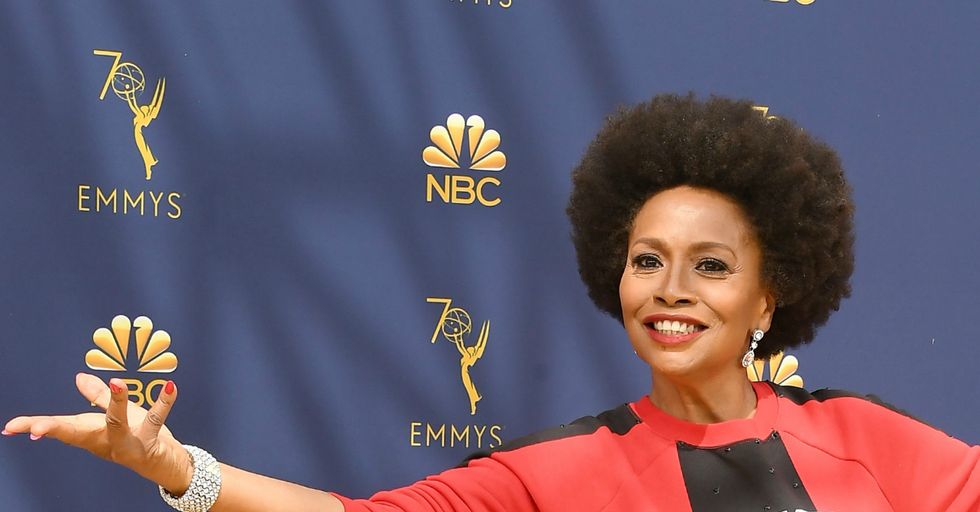 It's not everyday a star answers "Who are you wearing?" with "Nike!" But Jenifer Lewis is doing just that at the Emmys tonight.

Jenifer Lewis, who plays Ruby on Blackish, rolled up to the Emmys looking extremely comfortable in leggings, sneakers, and sweatshirt. Her casual look would turn heads in any circumstances, but she dressed down for a good reason: Lewis ditched the ball gown to don Nike gear in support of their campaign with Colin Kaepernick.

Stars often use award shows as a platform for the causes they support and in 2018, when political tensions are higher than ever, it should come as no surprise that stars are using their time on the red carpet to make a statement. Lewis’ Nike gear was bedazzled with rhinestones, because obviously, it’s the Emmys after all, she still has to be sparkly. But more importantly it showed her support for Colin Kaepernick.

She said, ""I am wearing Nike to applaud them for supporting Colin Kaepernick and his protest against racial injustice and police brutality."

Kaepernick started the player protests during the National Anthem at NFL games to raise awareness of the mistreatment of black people in America.

Lewis wasn't shy about sharing with reporters why she was wearing the Nike gear.

Jenifer Lewis: "I am wearing Nike to applaud them for supporting Colin Kaepernick and his protest against racial in… https://t.co/2iGiZRfaHT
— Variety (@Variety)1537221848.0

According to Lewis some of her friends came over and helped bedazzle her top.

During an interview with People, the crowd behind Lewis started cheering for her.

She turned around and yelled "Colin Kaepernick!" which was met with even more cheers.

According to one interview, Lewis said, "We are not living in dark times. We are living in awakening times."

Lewis stood up for what she believed in and got to wear comfortable shoes to an award ceremony? Win-win.