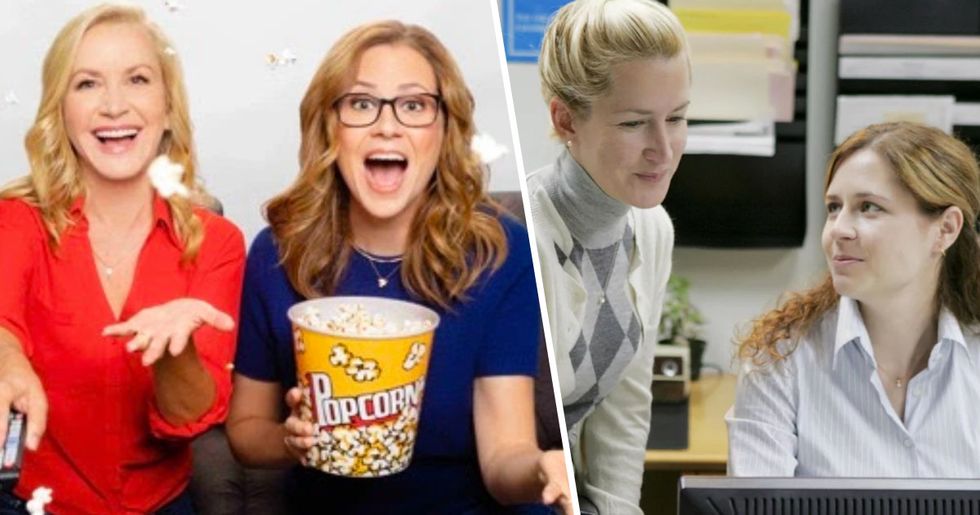 NBC's The Office stopped airing in 2013 but it remains one of the most beloved sitcoms of all time. Since the show ended, fans have been feeling an absence in their lives - and rewatching the show for the hundredth time just doesn't seem to cut it. But it was the only option available - until now.

Jenna Fischer and Angela Kinsey (Pam and Angela, to Office fans) have just announced some very exciting news. The pair are planning to launch a podcast related to all things Dunder Mifflin next month. Podcast network, Earwolf, shared the news today - and the internet has gone wild.

The show ran for eight years and gained a huge legion of incredibly loyal fans.

Many don't know that the show is actually a remake.

The original Office was a U.K. television show starring Ricky Gervais. It had a darker, more dry sense of humor compared to the more heartwarming U.S. version.

The Office is one of the most loved sitcoms in history.

Sure, it starts to take a downturn towards the final seasons - but it still stands up as one of the funniest and most watchable TV shows in history.

The show is absolutely hilarious.

It's absolutely filled with hilarious one-liners and the show's scenes have given us some of the most iconic memes in the past few years.

But there's more to the show than just laughs.

At the heart of The Office is a truly heartwarming show about friendship and love - even between slightly oddball characters.

And since the show's end, fans have been feeling its loss.

The one saving grace is that fact The Office has such eminent re-watching potential - which many of us take full advantage of.

One of the show's most beloved characters is Pam.

The receptionist undergoes a real transformation over the show's seasons, finding true love and becoming a mother.

The show wouldn't be the same without disapproving Christian and massive cat-lover, Angela.

On the show, the pair do not get along.

Angela consistently finds Pam's life choices a little unconventional for her tastes and this often turns the pair's relationship into a competition.

But, in reality, things are very different.

And the latest news that the pair have dropped is pretty exciting.

Angela and Jenna have paired with podcast network, Earwolf, to launch a show discussing all things Office-related.

The show has been called "the ultimate podcast for nostalgic fans."

It's set to be a weekly show, during which the two will break down iconic Office moments and deliver their exclusive behind the scenes perspectives.

Fischer shared the news with EW.

“So many memories are flooding in as we go back and watch the episodes – many of which I haven’t seen since they aired. As we close in on the 15th anniversary of the show, it seemed like a great time to share our stories and behind-the-scenes trivia with fans," she shared.

While the show will be Office focused, it'll also be about Jenna and Angela's lives more generally. "Besides talking about The Office, you can also hear us chat a little about our lives, our Target runs together, our friendship through the years. It’s a lot of fun."

Angela has offered her perspective, too.

She added, "The Office was such an amazing chapter of our lives and it means so much to us that we get to share some of our memories of filming it with our audiences."

After years of nothing, the idea of new content relating to their favorite show is almost too exciting to bear.

Many see it bringing them into the podcast game.

Even those who don't tend to enjoy audio content will give it a go if it means more Office info.

Especially because of this.

Many Office fans have been relying solely on rewatching old episodes for the past six years, which makes this new podcast very exciting news.

Many believe that the show will be a pale imitation of the sitcom's glory - and want more of The Office, rather than listening to the two actresses talking about their lives.

But we're pretty into it.

If you fancy giving it a go, it launches on October 16th. And for more Office related content, keep scrolling to learn about the Card Against Humanity game based on the show.