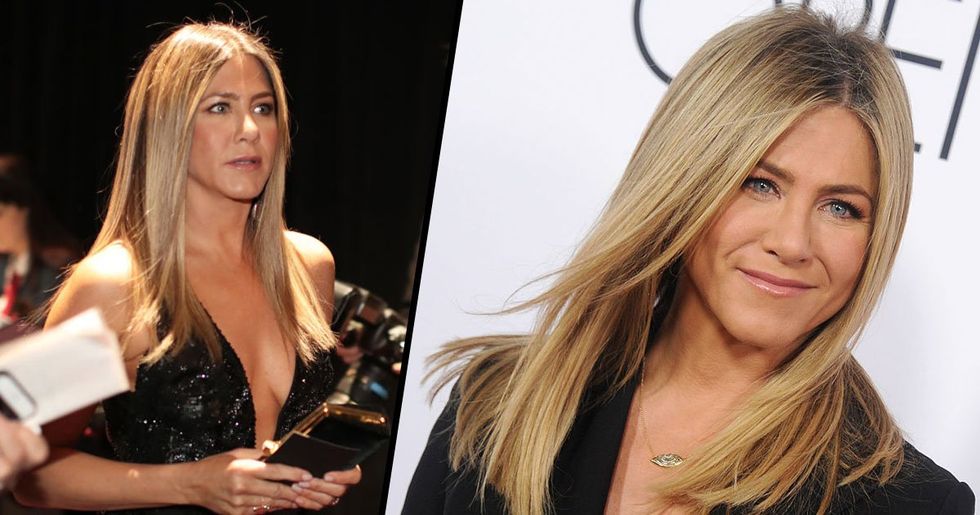 Since Jennifer Aniston exploded onto our screens as Rachel Green in the hit sitcom, Friends, she's been dubbed as one of the most beautiful women in the world.

And, in true Aniston-style, the star sent us all into full-blown meltdown when she was announced as the cover star for InStyle's beauty issue. The actress posed for 5 alternative covers, on which, let's be honest, she looks incredible. But, as the images were unveiled online, there's one in particular that hasn't gone down well with fans.

Jen has found herself coming under fire for the shot, which fans say is "heavily" photoshopped.

Keep scrolling to take a look for yourself. Everyone's saying the same thing...

The star played Rachel Green in the show. The popular sitcom first aired in 1994 and went on to have a hugely successful 10-season run until it closed its doors in 2004.

One of the highlights of the entire show has to be Rachel's mid-'90s style.

Many of the on-screen looks that Aniston sported give us major style envy and have long been associated with the timeless '90s aesthetic.

And of course, we can't forget the infamous "Rachel" bob.

The haircut firmly cemented her with the classic "girl next door" vibe.

Though all of the cast rose to fame from the show, Aniston has had a particularly glowing career since it ended.

She has somewhat managed to distance herself from her Friends roots and has gone on to star in countless movies over the years since the show finished airing.

From We're The Millers to Just Go With it, Aniston is without a doubt a rom-com queen. Let's be honest, there aren't many cheesy rom-coms that don't feature the actress.

Most recently, she starred in the hugely successful Murder Mystery alongside Adam Sandler.

The movie, which smashed Netflix records during its opening weekend, tells the story of a couple from New York who get caught up in the middle of a mystery surrounding the death of an old billionaire during a belated honeymoon trip to Europe. It’s essentially been described as Murder on the Orient Express with added comedy elements.

Aside from her booming box office career, she's also known as one of the world's most beautiful women.

Having stepped onto the fashion and beauty radar during her decade-long Friends stint, Jen has found herself being praised for her looks, most notably so when she was named the most beautiful woman in the world by People Magazine in 2016.

The star is no stranger to the beauty spotlight.

Even while starring in Friends, the actress featured as a cover star for major fashion and beauty mag, Cosmopolitan.

Through the years, she's remained a natural beauty.

We all know that Hollywood stars tend to have a few tweaks here and there, but when it comes to Jen An, who's now fifty, she barely seems to have had work done... and if she has, at least she can move her face still.

Her natural good looks have had fans begging for her skincare routine.

For the record, she doesn't have a surgeon, or celebrity dermatologist, to thank for her iconic complexion, but her mom, apparently. The star says that her skincare routine hasn't changed in "decades,"  and that she's been moisturizing her skin with Aveeno since she was fifteen. (Let's ignore the fact that she does have endorsements with Aveeno though...)

And her latest beauty-related venture has seen her be unveiled as the cover star for Instyle's beauty issue.

The special edition of the magazine has 5 different covers and features Aniston channeling several '60s and '70s inspired looks.

The star showed off her "ageless beauty" across the 5 covers of the mag in which she offers an exclusive interview chatting all things acting, beauty, and the #MeToo movement.

One of the most prominent topics of her feature was aging.

More specifically, the fact that the star has hit fifty this year, an age that would have once killed the career of a woman in Hollywood.

When the magazine unveiled the covers, initially, they went down a treat...

After all, she's looking incredible.

But there was something that rubbed fans the wrong way.

One of the covers came under fire, with many people flocking to the comments to call out the star, who, in frank terms, they believe isn't a "natural" beauty at all.

Fans have called out the image for being "heavily photoshopped."

@Megan4MAGA @RNcat50 That doesn’t even look like Jennifer Aniston. I’m ready for people to stop with the photoshop… https://t.co/C1vNMfa8T3
— Princess Deanna (@Princess Deanna)1567782209.0

Many people seem to think that the image is way too airbrushed and looks hardly recognizable. Which, in a way, defeats the entire "ageless beauty" vibe.

Fans also think that Jen An is way too bronzed.

Many users slammed the star for her dark tan, which some say veered on "blackface."

Although countless people quickly came to the star's defense.

What we NOT about to do is slander Jennifer Anniston, she is beyond unproblematic and is absolutely beautiful. She… https://t.co/9qP5Snpaco
— Zoolander (@Zoolander)1567701148.0

Several fans hit back at those criticizing Aniston, pointing out that she's one of the least problematic celebs and has simply "got a tan," which is hardly a crime.

Many chimed in to say that the star is also half-greek, so is likely that she tans easier anyway.

Her father, John Aniston, was Greek-born. Neither Instyle nor Aniston have commented on whether the star's skin was darkened, either with make-up or through photoshopping. To hear Jen's thoughts about a possible Friends reunion, keep scrolling!