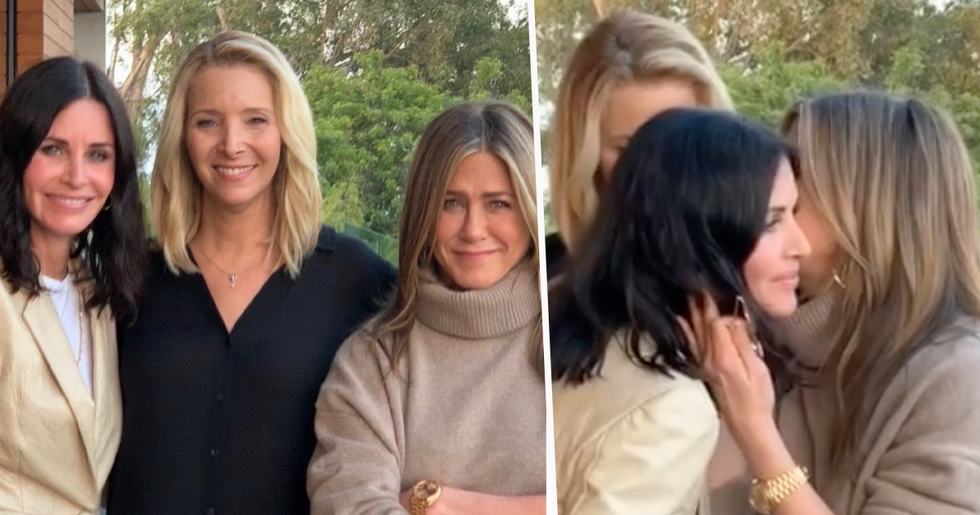 Jennifer Aniston, Courteney Cox, and Lisa Kudrow have all been slammed this week by fans after uploading a "dangerous" Instagram post.

The Friends girls have landed themselves in some serious hot water this week.

Throughout lockdown the cast members have been reminding fans the importance of taking the pandemic seriously.

Including  the simple act of wearing a mask.

In fact, a week ago, Aniston shared a heartwrenching post on Instagram warning people exactly why they need to take the virus seriously.

“This is our friend Kevin. Perfectly healthy, not one underlying health issue. This is Covid. This is real," she began.

“We can’t be so naive to think we can outrun this…if we want this to end, and we do, right? The one step we can take is PLEASE #wearadamnmask."

Both her and Cox have been urging people to wear a mask in recent weeks.

And even posted a video together donning their own.

But this week, both Aniston and Cox as well as Lisa Kudrow have landed themselves in hot water with fans.

Of course, some fans loved the pic.

People can't get enough of the stars.

So, it wasn't all entirely bad.

But there was a fair share of negative comments.

Several people pointed out the same issue after the photo emerged...

and it's not looking good...

In the caption, she urged people to vote. "Friends don't let friends skip elections. Text FRIENDS to 26797 to make sure you are registered. And tag your friends below to remind them to check their registration," she wrote.

But it clearly didn't have the intended effect...

Because the comments were instantly flooded with fans pointing out a specific detail.

Where are their masks?

Fans began questioning why the trio weren't social distancing or wearing masks around each other.

This could very well be an old photo taken before the pandemic.

Fans are pointing out the hypocrisy, given the fact that the actresses, especially Aniston and Cox, have been very vocal about wearing masks. Yikes.

None of the stars have spoken out about the backlash.

If you want to read more about the Friends cast, scroll on to check out Jennifer Aniston's secret tattoo and the meaning behind it...