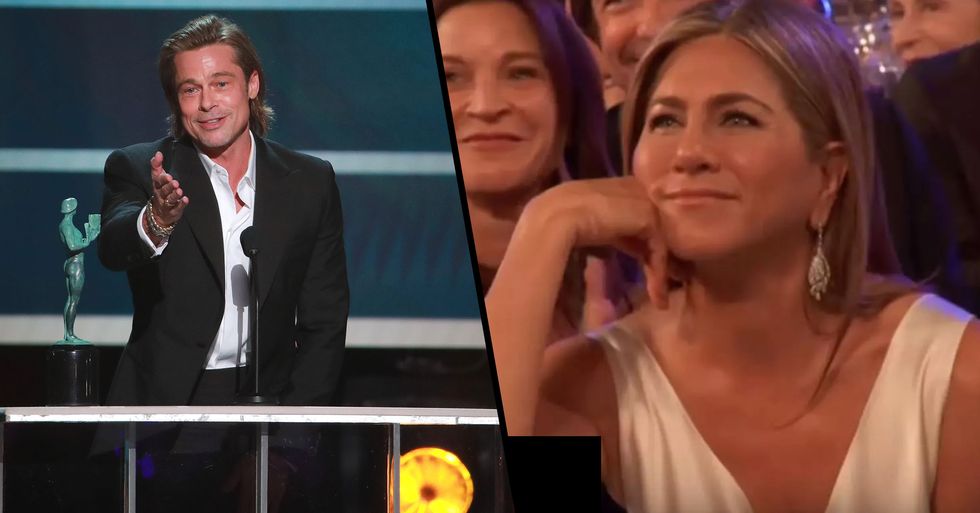 But now Brangelina are over, fans are convinced Jen and Brad are more than just good friends. And what went down at last night's SAG awards seem to confirm the theory.

Because last night at the SAG Awards ...

But that's not the only Brad and Jen moment to get the internet talking.

Because the two seemed to share an inside joke during Brad's acceptance speech.

(FYI, Brad picked up the Best Supporting Actor award for Once Upon A Time In Hollywood.)

And his speech captured the internet's attention - for a wide variety of reasons!

But then he drew attention to his love life.

Which, unsurprisingly, got the Brad 'n' Jen shippers feeling excited.

And one joke, in particular, has ruffled feathers.

"Let’s be honest, it was a difficult part," Brad started.

But the punchline was the real kicker.

"A guy who gets high, takes his shirt off, and doesn’t get on with his wife. It was a big stretch." Woah. Quite the dig at Angelina Jolie, there!

And even more savage?

Jen's (clearly amused) reaction to the whole thing. We're feeling suspicious, all of a sudden!

Here's the speech that got the whole internet talking!

Fancy more from Brad and Jen? We know you do. Keep scrolling for her adorable reaction to his Golden Globes win.