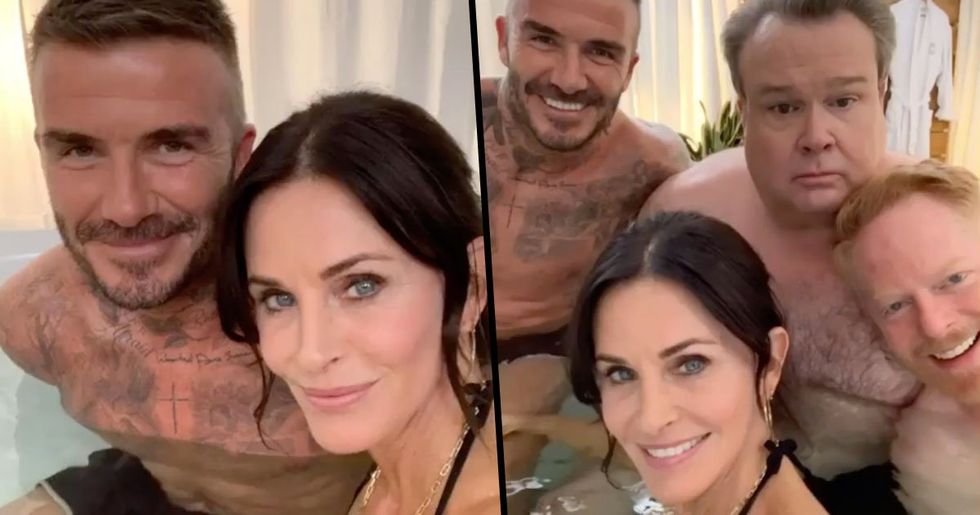 Courteney Cox and David Beckham. One renowned for starring in one of the biggest sitcoms of all time. The other recognized globally as one of the true, all-time footballing greats.

There's no denying that these two a-listers are two of the biggest names in all things celebrity. But when a photograph of them in a hot tub together went viral, a lot of people were wondering what was going on... And, upon closer inspection, another question voiced by many was - what the hell is Courteney Cox's hand doing?

Fellow FRIENDS star and long-term best friend, Jennifer Aniston has responded to the snaps and has completely trolled the pair.

Keep scrolling to see what Jen had to say about her bestie's antics...

Okay first things first, let's do some introductions. Although admittedly, these two stars don't need them. David Beckham. We all know him. He's been a legend since he first began kicking footballs. He's scored countless goals for Manchester United, Real Madrid, and LA Galaxy. He also starred in 115 games for England, making him the most capped English player in history after Peter Shilton.

For as long as I can remember, Beckham has been a huge icon. He's a role model for many, as well as a huge name in the fashion world.

Courteney has been on Instagram for years, and she gives updates on just about everything in her daily life. Recently Jennifer Aniston signed up - and it's rumored that Courteney was the one who prompted her to take the leap.

Jen signed up to Instagram significantly later than her Friends coworkers - but Courteney was more than willing to give her the welcome she deserved.

"Hi Jen, welcome to the social media world. It sucks. You're gonna love it!"

It's not just a "Friends" reference.

It actually dates back to the first EVER Friends episode when Courteney said almost the exact same thing to Jen.

It was that hand. That god damned hand. Resting underwater on Beckham's lap. Just inches away from his... shaft? One person commented: "I see that hand Courteney. Victoria sees it too." Another added: "Omg I noticed it too. Imagine Victoria looking at this picture with an eyebrow raised."

One person said: "Courtney keep your hands to yourself." Another wrote: "If I was Victoria I would be fuming."

Well, it would appear the photo was taken on the set of Modern Family.

The main clue being fellow stars of the show, Jesse Tyler Ferguson and Eric Stonestreet, are also in the tub. And also a shot of Beckham and Cox reading their scripts for a new episode. It's certainly an all-star cast!

Beckham has since spoken out about the photo.

Speaking about the whole debacle, Beckham told people to 'come on.'

He made a "Friends" reference too.

In his response, Beckham wrote: "I mean come on it’s Monica, Mich & Cam 💗 can it get any better." Eric Stonestreet also commented saying he liked it! Whereas Jesse Tyler apologized for being gassy.

Many people were wondering what Victoria would say.

It's only natural. What was Beckham's wife, the fashion legend and Spice Girls star, Victoria, going to say? Well, she's broken her silence.

She commented on this photo.

The photo shows Beckham and Cox seeming a little more professional as they rehearse their Modern Family lines. Beckham shared the photo on Instagram with the caption: "I met a new FRIEND 🤩 today at work @courteneycoxofficial #modernfamily 😍"

But what did Victoria say?

She doesn't seem to mind.

Admittedly she commented on a separate photograph, but it seems Posh Spice is pretty cool with Becks' friendship with Courteney Cox. Although fans are hoping for a photo of all three together.

Although I have one final question.

Where was my invite? This hot tub party looks like the bomb. Let me in.

And another person who didn't get an invite?

And she didn't hold back in the comments...

She commented on the post with, "Wait... WHAT'S HAPPENING!!!" with a series of shocked, confused, and party emoji faces.

And it even led one social media user to comment: "plz don't tell Chandler".

But what else are best friends for?!