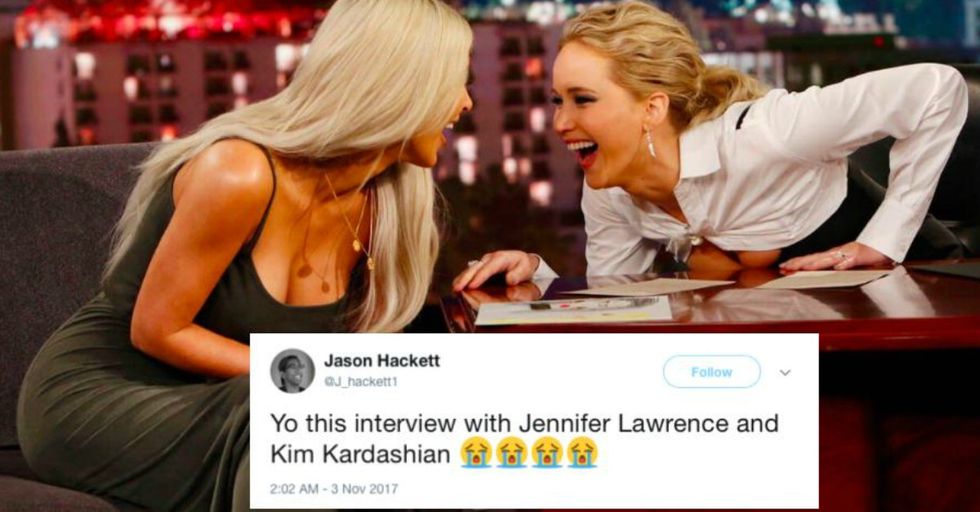 Lawrence, who was so excited to host the show, she joked about not accepting pay (“It was an honor to be asked to fill in for Jimmy tonight. I was so excited to do this; I even told the producers, ‘I don’t even want any money for this.’ And they said, ‘No, Jennifer, we insist on paying you... 29 percent less than the male guest hosts’”) made sure she saved an interview for the woman she is obsessed with.

And of course, she came with all the best questions. "Do you think it's a coincidence that Reggie Bush's wife looks just like you?" Lawrence asked as soon as Kardashian West sat down. "I don't."

She then recalled being a guest at the home of Kris Jenner, Kardshian West's mother, a few weeks earlier.

"I've never seen my mom more drunk in our lives," Kardashian West recalled. "It was so funny." Lawrence also talked about getting naked in Jenner's closet and demanding Kardashian West style her – to very stylish results.

After a hilarious interview filled with quick back and forth banter between the two, Lawrence got down to a serious question.

"What do you guys think about Blac Chyna?" Lawrence asked. Blac Chyna is the estranged fiancé of Robert Kardashian, who filed a lawsuit against the family, blaming them for the demise of the pair's milquetoast reality show Rob and Chyna.

Rob and Chyna have not had an easy time of it in previous months, largely due to Rob's aggressive and illegal social media behavior.

Rob posted nude pictures of Chyna on social media – which is a crime – and Chyna put out a restraining order accusing him of domestic abuse.

Kardashian West took a moment to compose her answer before she spoke.

"Umm... you know, I always said that when someone was gonna ask me... you know, Dream is gonna see this one day and so I think it's just super respectful to not say this about my niece's mom," Kardashian West finally answered. You can watch the question at the 17:50 mark. The interview wrapped up with Lawrence giving a quick shout out to Kardashian West's new makeup line. Jimmy Kimmel, Jennifer Lawrence is coming for your seat!