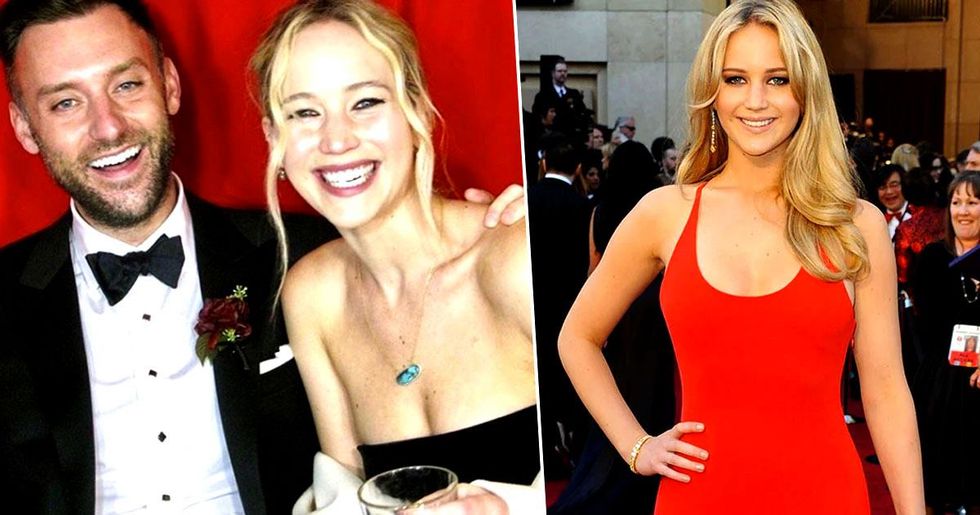 J Law got married! And what a beautiful bride she was.

To whom did the Hunger Games star marry you ask? Well, actually some dude none of us had even heard of until eight months ago.

The mystery surrounding Cooke Maroney still remains a pressing matter. Unfortunately from what we do know I have a strong feeling, this is one couple that will not be doing a tell-all ten-page spread with Us Weekly.

One thing we do know for sure is that Cooke is now definitely Mr. Jennifer Lawrence.

What a lucky guy!

Lawrence was spotted on numerous cute dates with the tall dark and handsome man we later learnt was called Cooke Maroney.

Eyes on the prize?

It was quite clear to everyone that the pair were smitten...

Fans of this couple rate them hard.

Not only do J-Law fans approve but they want to make sure everyone knows that this couple is the cutest ever.

I mean there's no denying they're quite the pair. But with this Jennifer Lawrence match, it's hard to say he's all that without knowing anything about him, right?

We all knew Nicholas Hoult.

J-Law dated her X-Men costar Hoult for about four years. Though the pair did break up, they remain on good terms and are still friends.  Not sure he got an invite to the big day though...

After meeting on the set of Mother! in 2016, Lawrence had a year-long love affair with the director. Aronofsky has a kid with the beautiful Rachel Weisz and is the guy behind Black Swan and Pi. As interesting as Aronofsky is, perhaps the twenty-year-age gap proved a problem. J-Law had broken it off by the end of 2017.

J-Law met her match in 2018 when she became acquaintances with Cooke Maroney.

Which is when everyone started asking...

I mean if he could bag J-Law but no-else knows who is then this mystery man must have something to hide, right? Must be a gangster.

Actually Cooke Maroney is the gallery director of The Gladstone.

So not a gangster then... The Gladstone is one of the most popular art galleries of contemporary work in New York City.

So that's where they met.

Sounds like something straight out of one of J-Law's movies, doesn't it? As she perused the artwork of the trendy gallery she just happened to get talking to the gallery director. You can imagine the pair walking around with Maroney describing the different pieces and asking which ones move her. She looks at him, he looks at her... they kiss.

Cooke seems seriously down to earth.

Making him a perfect match for the extremely down to earth Hollywood actress.

Not that the chill couple didn't go all out for their big day...

No expense was spared for J-Law and Cooke Maroney's big day. The pair got married at a secretive ceremony in Rhode Island in front of 150 guests.

The location was a traditional affair.

The couple reportedly chose to wed at a Louis XIII style mansion, the Belcourt of Newport. Bit posh that innit? I'm sure J-Law's chill exterior ensured the ceremony wasn't stifling. Although no official photos of the wedding itself have emerged as of yet, according to People, Lawrence wore a Dior wedding gown and no doubt looked as chic as ever.

The wedding reception took place at a haunted mansion.

Apparently the wedding reception went down at a haunted mansion. Many A-listers were there for a night of cocktails, dinner, dancing, and live music. Sounds great!

Numerous photos have emerged on social media as stars such as Emma Stone and Adele attended the wedding ceremony.

The wedding of Jennifer Lawrence would have no doubt been full of laughter.

J-Law is the wedding guest everybody wants.

I wonder who was the maid of honour for Jennifer Lawrence...

In fact, rumour has it, J-Law's long term BFF, Laura Simpson was actually the one who introduced Jennifer and Cooke. A source told Page Six, "They met through Jen’s friend Laura …" Simpson had apparently known Cooke for over twelve years. It would be no surprise at all if this matchmaker was the maid of honour.

Congratulations to the happy couple.

Despite how private this couple has been about their big day, we're confident it went off without a hitch. I mean J-Law probably tripped over a few times but that was to be expected! Now we wait for the cute J-Law/ Cooke babies!