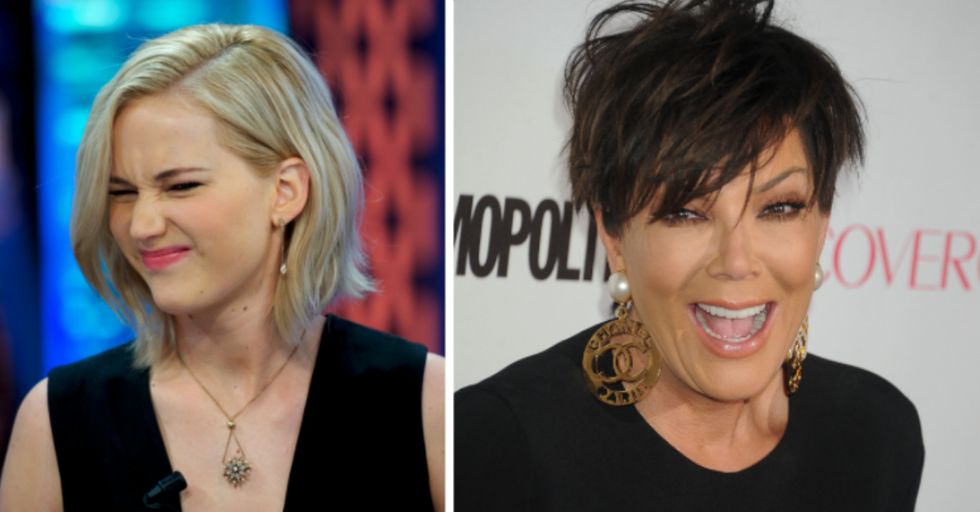 Apparently, Jennifer Lawrence once got super wasted at Kris Jenner's house and then got naked in her closet.

Lawrence told the whole story on a recent episode of Jimmy Kimmel Live! It's a real doozy.

Jennifer Lawrence guest hosted Jimmy Kimmel Live! last night, and she seriously could not have been happier. That's because Kim Kardashian was one of the evening's guests, and Jennifer Lawrence is a superfan of Kim and her family.

Obsessed with the Kardashians? Maybe celebrities really are just like us! The comparisons to us regular humans stop there, though.

The two women started talking about Lawrence's recent visit to Kris Jenner's house. Apparently, Lawrence was there for dinner. However, she and Jenner quickly got pretty drunk. "I've never seen my mom more drunk in our lives," Kardashian said of the evening. It was then that Lawrence had a wonderful idea:

She decided it was the perfect time to play dress up! "I remember getting naked in your mom's closet and ordering you to dress me..." Lawrence said. *Record scratch* What?!

We like to imagine this whole thing happening while "Girls Just Wanna Have Fun" was playing in the background, '90s movie montage-style.

Apparently, getting styled by Kim K. herself wasn't enough for J-Law.

"You said, 'I'm not joking. I really want Kanye to style me!'" Kardashian said of Lawrence's antics. "And so I said, 'OK' and I come back in and you're fully butt naked. So I thought, 'Um, I'm gonna intercom him downstairs and tell him not to come upstairs.'" Lawrence then admitted that she apparently still has one of Jenner's dresses in her closet at home.

What a crazy night! You can see the entire interview here:

We knew that if Kim Kardashian and Jennifer Lawrence were hanging out, there must have been some kind of hilarious insanity. But we didn't expect it at quite this level.