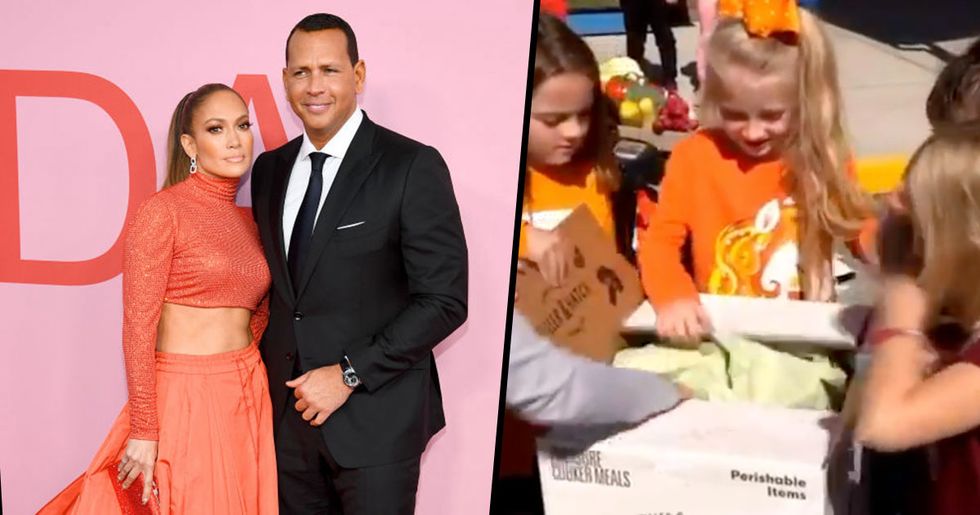 J-Lo and A-Rod are a match made in Heaven.

The engaged couple recently spotted a Facebook post penned by Jacksboro Elementary School teacher, Brooke Goins, which spoke of a student who revealed that he often goes hungry both at home and at school. Rather than shed a quick tear and keep scrolling as most of us often do (guilty), the stars did something incredible and both the teachers and the students at the Tennessee school were incredibly moved by their gesture.

Keep scrolling to hear more about the story and to see footage of the adults' and kids' reactions to the kindness of the pair - it's heartwarming that's for sure!

There appears to be no animosity from either side, and the two families have fused into one big happy family.

The couple that swings together...

Not like that... don't be accusing me of fake news! How cute do they look on that swing though, right? And the caption! Rodriquez says that being with JLo makes him feel like a kid again *cry face emoji* - you guys.

In this sweet post from last year, Rodriguez proudly posts his beautiful modern family. We can expect now that the pair are married that this family model will continue growing from strength to strength.

Anyway, time to prove that these two aren't only ridiculously beautiful and madly in love...

They're also total sweethearts! The couple apparently spotted a Facebook post about a child who admitted that he regularly goes hungry during a conversation about spaghetti 'os in class.

Teacher, Brooke Goins, wrote that she was chatting with the student about spaghetti 'os when he said: "We don’t have those at my house, but when I do have them they give me a warm belly and help me sleep." "I lost it," Goins wrote. "I cried in front of 20 little people. No kid should ever be hungry, ever."

So Brooke and her colleagues decided to help out.

"Yep, we put our money together and made sure that this sweet baby had some spaghetti o’s!,"  she wrote.

Brooke claims that she didn't post about the young boy for "attention."

"I want people to know that teachers are humans, we love your kids and want the very best for them. Some days we get frustrated and feel overwhelmed, but today we did what was best for a child. Will it show on a test score? Nope! Do we care? Nope!"

And Jennifer Lopez and Alex Rodriguez were two of those people.

On Wednesday, J-Lo posted a video to her Insta.

The video shows the lovely pair talking via video call to Brooke Goins and her class. "When we heard about the students and amazing teachers at Jacksboro Elementary in Tennessee, we knew we had to help," J-Lo wrote alongside the video. "We heard teachers were helping students bring home food when they didn't have enough." Keep scrolling to see the full video!

"Everyone should have access to delicious, nutritious food. This was my favorite moment of the month and it's one of the best things we've been able to do."

The BBC wrote that "around six million children in the US don't have regular or sufficient access to food."

It's heartwarming to know that people are doing what they can to help.

And not just people like J-Lo and A-Rod, Brooke Goins and the rest of the faculty at Jacksboro Elementary School are doing incredible things.

"We are now starting a food pantry for our students. Students will be able to get food whenever needed!," she wrote.

The internet is standing in support of Brooke and her ambitions.