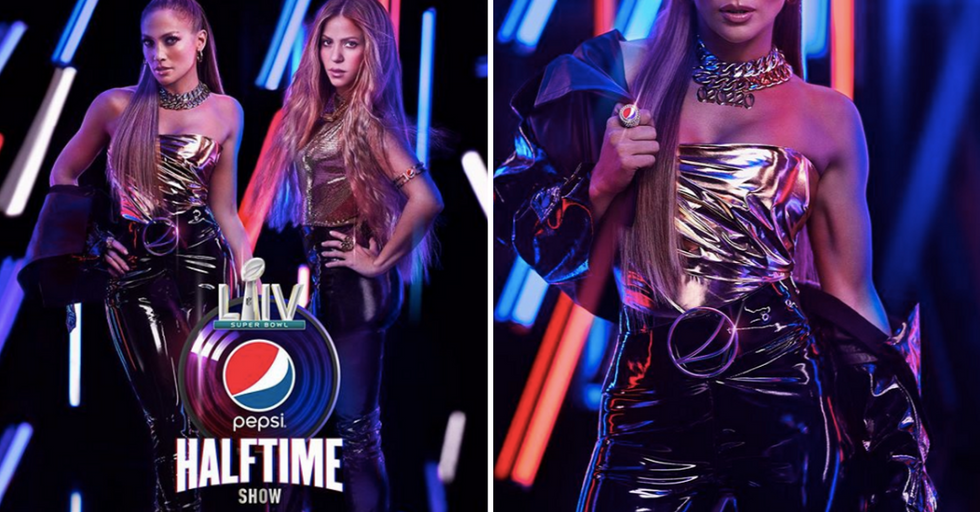 Fans of J.Lo and Shakira, rejoice! The two spicy sirens will be co-headlining next year's Super Bowl halftime show on February 2nd, 2020... which just happens to also be Shakira's birthday! Talk about a big birthday present...

So how did their journey to the world's biggest stage start? Keep reading to find out!

Lopez posted it with the caption "Going to set the world on 🔥🔥🔥" while tagging Shakira.

The tweet featured a cut-off photo of her co-headliner, Shakira, with what looks like a Pepsi arm band on her bicep.

Most people were overjoyed.

Fans tweeted things like "OMGGGG QUEEN YES!!!" and "OH MY GOD YEEESSSSS." But not everyone was happy...

Some fans were upset that she was willing to work with the NFL.

They wrote things like "Imagine doing the super bowl after all the antiblack stuff the NFL did..." and simply, "Gross." For a quick refresher, The NFL policy says, "players had the option to stay in the locker room, but everyone on the field had to 'stand and show respect for the flag and the anthem.' Teams would be fined by the NFL for violations," according to SB Nation. Many expected Lopez, a woman of color herself, to stand with Colin Kaepernick and the other protestors, rather than performing at the NFL's biggest event of the year.

And what about Shakira?

According to People Magazine, this isn't the first time the idea of playing the Super Bowl halftime show has come up.

During an interview with Kelly Ripa and Ryan Seacrest, Lopez said, "It’s something that we’ve talked about for many years, and, you know, it would be nice. It would be nice. I can’t say I wouldn’t love it."

PepsiCo is certainly very excited about the pairing.

"We are so excited to announce that global superstars Jennifer Lopez and Shakira will take the stage together for the very first time at the Pepsi Super Bowl LIV Halftime Show. We’ve been working closely behind-the-scenes with our longstanding partners at the NFL, and now alongside Roc Nation to bring these mega superstars together. It is a testament to our partnership and commitment to push the envelope of what is possible," said Adam Harter, Senior Vice President of Sports, Media and Entertainment, for PepsiCo.

Now, let's take a walk down memory lane to remember all of the crazy Super Bowl halftimes shows of years past...

First up, Maroon 5. The 2019 Super Bowl was criticized as a bit of a letdown – but it’s clear the Maroon 5 performance didn’t help matters. Even basketball superstar LeBron James seemed overall just baffled by the shoddy, rough-around-the-edges performance, tweeting, "Soooooooo...... This halftime show though. That’s all for Travis or nah?!?!?!"
Some believed that it was preconceptions about the performance which were the reasons for its poor reception. Many thought it was the bad taste the lack of political activism left in people’s mouths that people found unpleasant, rather than Maroon 5’s performance itself.
Either way, it's pretty unlikely that history will remember the show favorably.