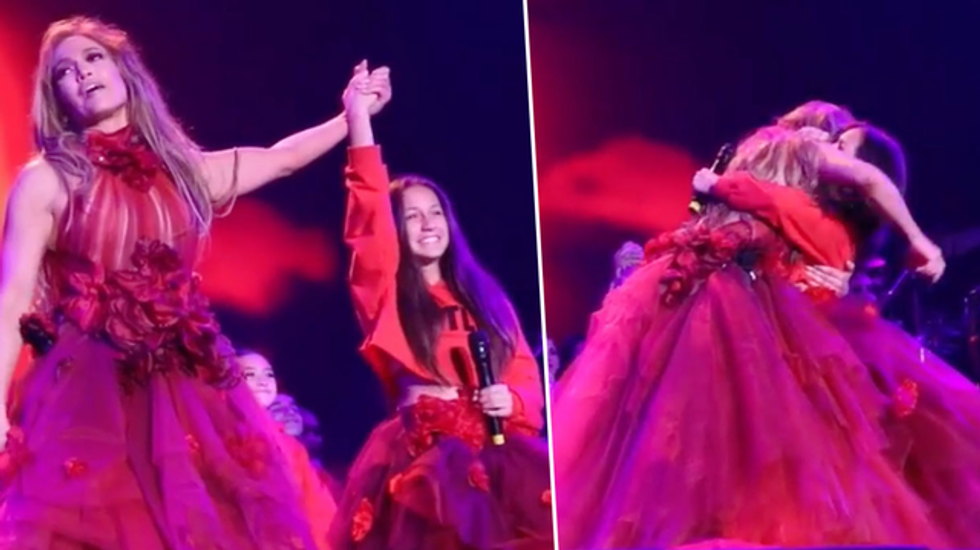 Jennifer Lopez really is a goddess, isn't she?

There's nothing the woman can't do. Not only is she a successful Hollywood actress, she's also a phenomenal singer and performer. Oh, and she just doesn't age. How does that even work?!

On top of all that, JLo has always been a self-proclaimed family woman and regularly shows off her children to her millions of followers. Lopez has never shied away from including her kids in her public affairs and has always been open with her love of being a mom.

And Lopez gave her fans the best surprise on the opening night of her tour, "It's My Party." Keep reading to see the spectacular moment that happened at her show in Los Angeles on Friday.

Her career was launched in the film industry.

She has released a number of hits.

We all know "Jenny From The Block," don't we? "Get Right" and "Play" were also huge hits and remain disco favorites today.

Yet, despite all of this, Jennifer is one big family gal.

When she isn't slaying the red carpet or performing in front of thousands, she's at home, apparently cooking in matching checkered shirts, with her fiance, Alex Rodriguez.

Motherhood is something that JLo has always been fiercely proud of and she has never hesitated to share her children's childhoods with the world.

JLo is the mother to a set of adorable twins, Emme and Maximillian, who are both eleven years old. Their father is musician, Marc Anthony, whom JLo split from in 2011.

JLo is obviously bursting with pride and she posts regular updates on the progress that her kids are making.

They seem to be following in their mom's footsteps...

As seen in her Instagram story, her children have clearly inherited their parents' musical talents. This is too cute.

JLo has proudly shared videos of the twins performing in the past.

Though Max is known as the introvert of the pair, he has demonstrated his impressive vocals on a handful of occasions.

But Emme, in particular, has inherited her mother's sass.

A video posted by JLo to mark the twins' eleventh birthday shows how Emme has really grown into a miniature version of her mother as she demonstrates identical vocals and spirit.

Footage shows Emme delivering a beautiful version of Alicia Keys' hit song. Though she started off tentatively, with encouragement from her mom, she ended the cover with rigor and enthusiasm. This then prompted her mom to suggest bringing her on stage.

And she's grown up fast.

The music video for JLo's latest track, "Limitless," which was written for the soundtrack of her new movie, Second Act, features Emme. And we have to say... she is killing it.

It was only a matter of time before JLo would include the kids in her shows.

With their undeniable talent, it seems like the obvious choice for JLo to invite her kids to perform with her at some point.

Though Lopez' shows aren't the most low-key...

Emme was invited onto the stage anyway... which is pretty scary for anyone, never mind a pre-teen! With Max being a little less inclined to being in the spot-light, Emme was the obvious choice.

The opening night of Jlo's "It's My Party" tour was held in Los Angeles on Friday night.

Fans who attended the show were treated with a huge surprise during the song, "Limitless."

And it was stunning.

Clad in a red dress to match her mom's, Emme confidently approached the stage. She then joined her mom and performed a beautiful duet, sending the crowd into a complete melt-down.

JLo was also beside herself.

Captioning her video, "I can't take it! #proudmama," Lopez was clearly starstruck - something like that doesn't happen often!

And, just like her mother, Emme owned the stage.

I don't know about you guys, but I wouldn't have been that confident and relaxed on a stage in front of thousands of spectators. Her performance was so spectacular that JLo herself ended by kneeling at her daughter's feet. Not many people can have that effect, let's face it.

Her kids are destined for big things.

I'm trying hard to not be too jealous of an eleven-year-old... But with parents as talented as theirs, this was always going to happen, wasn't it?