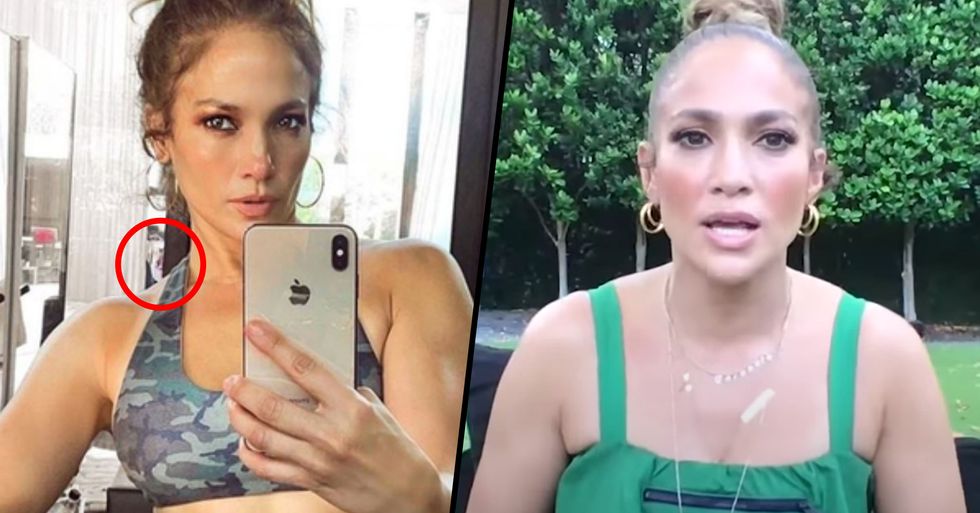 Ever since JLo uploaded a seemingly innocent workout selfie, the internet has plummeted into conspiracy theory central after a "distressed" looking mystery man was spotted in the background.

Now, the star has finally come clean.  Keep scrolling for the full interview...

This past week, JLo's workout selfies sent the internet into a complete frenzy...

And with good reason... there was a mysterious man lurking in the background - leaving fans very creeped out. Now, the star has finally set the record straight.

The star is currently engaged to Alex Rodriguez.

Fans were left very confused when a mystery man was spotted in the background of JLo's workout selfie.

It was all sparked from this photo.

If you look closely...

You can see a man's face behind Jlo.

Not only was he not Rodriguez...

Fans weren't quite sure if he was following pandemic recommendations such as wearing a mask.

Another thing they agreed on was that he looked somewhat distressed.

Was he trapped over there?

His lurking in the background suitably creeped out fans.

But this week, JLo has finally cleared up the mysterious man situation.

Viewers of, Jimmy Fallon's The Tonight Show finally got the truth out of her during her appearance on Friday night.

Apparently, it all has to do with how she and Rodriguez are utilizing their garage space at the moment.

"We didn’t have a gym in the house, so we just got a bunch of like, we got a bench and a few weights and I have my rehearsal mirrors back there for dance rehearsals -- which I always did in the house - in the garage," she explained.

And right nearby is where they have a meeting space set up...

Here, there is a computer monitor set up, the star explained. "That was a Zoom."

Jimmy then pressed her to explain the strange gesture/distress the man appeared to be experiencing...

But it seems the singer really didn't have any answers to that question. "I don’t know what he was doing, if he was sneezing or coughing," she said. All she knew was that "it was some real estate guy that Alex was on Zoom with."

So, it seems that's mystery solved!

But, let's be honest, the versions of events that the internet came up with would have made way better movies, just saying...

Watch her full interview below:

Want more JLo? Keep scrolling to find out why she is being sued $150,000 for an Instagram post...