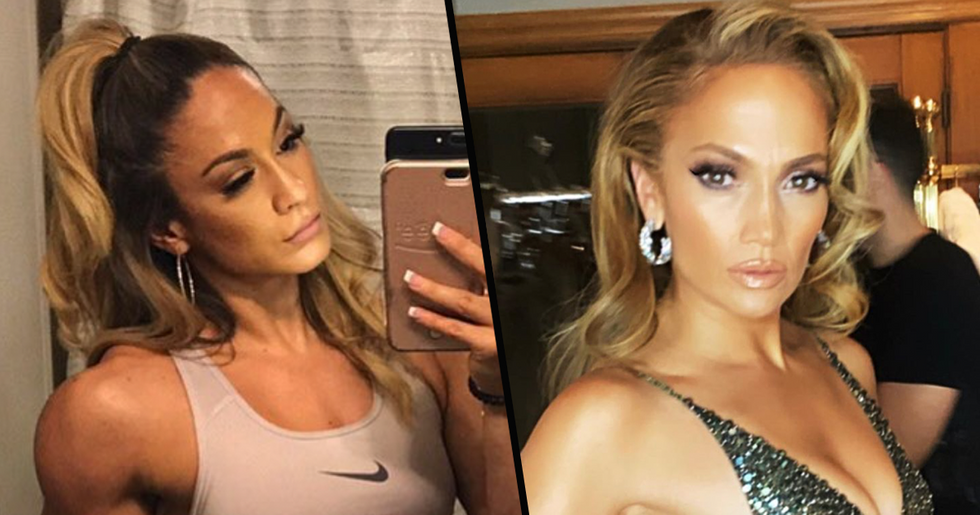 You’ll be amazed by the amount of uncanny lookalikes that exist among the Hollywood elite; some celebrities can even boast having more than one clone working beside them.

But the world is a big place, and it's not just celebrities that look alike, recently one bodybuilder has caused people to question if Jenifer Lopez is actually leading a double life...

Most of us have, at some point in time, been told we have a doppelgänger

According to a study done in 2015 by researchers in Australia, there's about a 1 in 135 chance that a pair of complete doppelgängers exist somewhere in the world.

But the likelihood of someone walking around looking identical to you is only 1 in 1 trillion... creepy.

With that in mind, you'd think that it'd be impossible to find people that look so similar, let alone celebrity doppelgängers. If that's the case, then what do you call these...

Robbie shares a lot of similarities with Emma Mackey, who is currently starring in the hit Netflix show, Sex Education. I mean, the likeness is uncanny!

The Pretty Little Liars actress has often spoken out about how she is mistaken for Gomez. And, can you blame them? They look almost exactly alike!

Although we like to tell ourselves nobody could ever look as good as our favorite celebrities, the truth is there are people out there rocking the exact same face!

And it's not just celebrity lookalikes, regular people have been popping up all over the place looking like some of our best-loved stars...

'Jay' as she likes to be called, went viral in 2017 after one of her photos was featured on Instagram's Explore page. "It was just normal selfies I had taken in my restroom, and people were assuming that I was Jennifer Lopez, commenting 'Are you J-Lo?' No...I'm Jay from Houston!"

It didn't take long for curious Instagrammers to start flooding in, she now has over 230,000 followers!

Though she's noticeably more ripped than the star, there's no denying the facial resemblance the pair share.

Her look is even classic JLo!

Paring big hoops with activewear, a bold smokey eye, and long loose curls! It's not hard to see why she has so many fans.

Despite competing in bodybuilding competitions a few times a year, the mom rarely posts workouts on Instagram.

Followers have to subscribe to a 30-day fitness challenge to get exclusive training from her, but clearly it's worth it. She also does cardio heavy dances on TikTok... don't roll your eyes, we all know you watch TikTok. Keep scrolling to find out why JLo is getting sued... The reason is ridiculous!