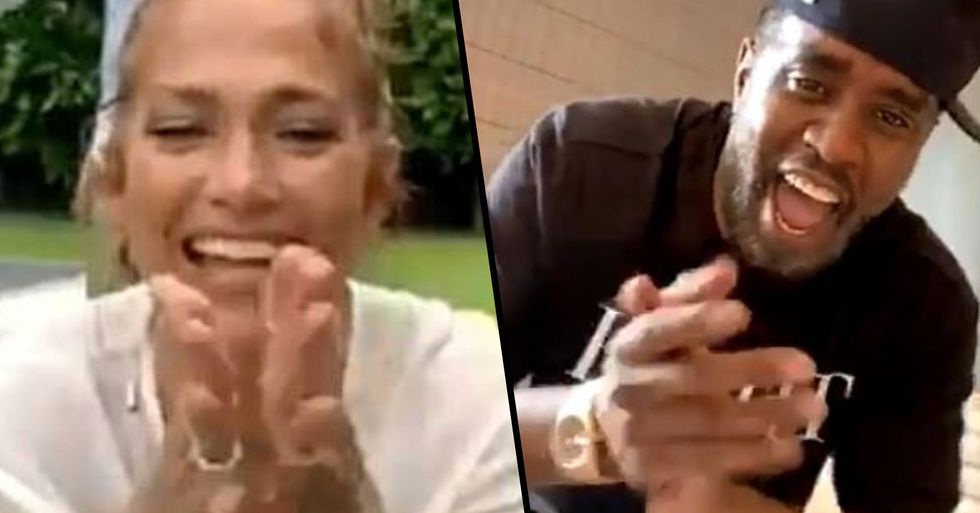 Many of us have been getting creative when it comes to keeping ourselves occupied while self-isolating. And it seems that JLo has used her time to reunite with her ex, P. Diddy nearly 2 decades after they dated...

But it's the reaction from JLo's fiancé, Alex Rodriguez, that's got everyone talking. Keep scrolling to watch the clip.

The star is currently engaged to Alex Rodriguez, and while self-isolating, she had a reunion with ex, Sean 'Diddy' Combs. Keep scrolling for the clip.

But over the weekend, it seems JLo has had an unlikely reunion...

The star shocked fans by joining her ex, P. Diddy on his Instagram live.

The pair dated nearly 2 decades ago.

They ended their relationship back in 2001.

JLo and A-Rod made a surprise cameo on Diddy's virtual dance-a-thon, which aimed to raise funds for the pandemic relief efforts.

The trio busted some moves, with Rodriguez stepping back at one point to allow Diddy and JLo some screen time on their own.

But it was what JLo had to say about Rodriguez that really got people talking.

During the stream, JLo revealed that Rodriguez is Diddy's "biggest fan."

According to JLo, the former pro baseball player always asks her to play her ex's songs.

So, as part of the dance section of the live stream...

Diddy played some tracks of his own featuring the rapper Mase - as per Rodriguez's request.

At the end of the stream, Diddy bid farewell to his ex and also expressed his love for her soon-to-be husband. "Hey, I love you guys. I can’t wait until we can see each other again. May God bless y’all, and I just love you guys!" "Love you, buddy," replied Rodriguez. "We love you," Jlo said.