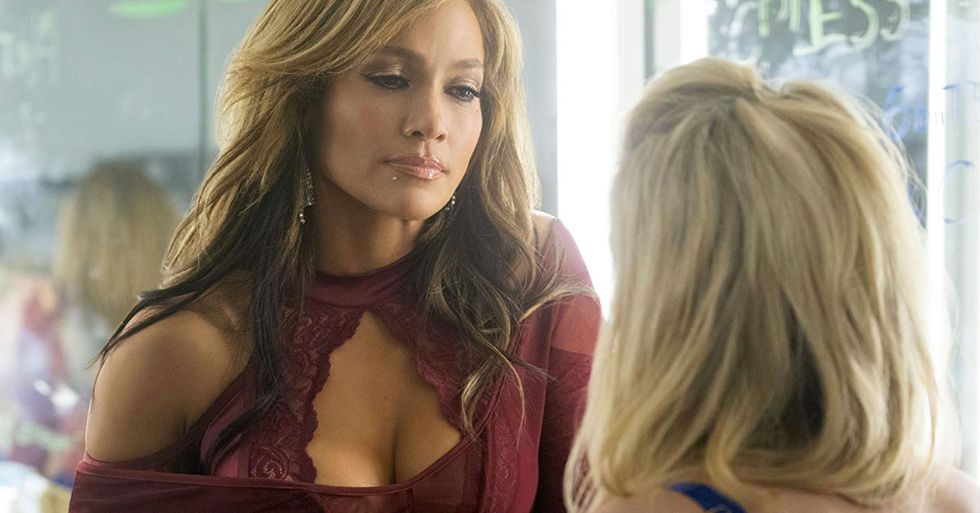 Viewers were absolutely stunned this year when J-Lo starred in feminist-stripper flick Hustlers. Not only was the movie incredible, but J-Lo's dance moves made our jaws drop. Even more jawdropping? Her interview with GQ, in which she revealed some behind-the-scenes gossip about the movie, her relationship with A-Rod, her decision to play the Superbowl - and even her paycheck.

Now J-Lo has been nominated for a Golden Globe based on her incredible performance - and it's safe to say, she celebrated in style.

Following this divorce, was her first of a string of power-couple pairings.

So quickly, in fact, that the 2 married in June of the very same year. Anthony already had a pretty illustrious career in the music industry at the time.

In February of that year, Lopez met New York Yankees baseball player, Alex Rodriguez, and the pair quickly began dating. And the couple is still going strong to this day.

Alongside romantic fulfillment, she's shocked the world by being the hottest fifty-year-old of all time. But on top of that, she's starred in one of the best movies of the year, Hustlers.

Hustlers was a massive critical and commercial success.

And to make the story even more exciting? It was based on a true story. Hustlers is about a group of New York strippers who created an elaborate scam to steal money from their hapless customers.

There's a lot to love about the movie.

For one thing, the choreography is incredible - and just a little bit inspirational, too.

The movie had an amazing cast.

But there's no denying who stole the show.

Jennifer Lopez's role as the badass Ramona was the highlight of the movie for many.

And J-Lo has spoken out about her most challenging role yet.

"That's the Jenny From the Block. I do what I want, I do what I love. But it was kind of a really different mindset to get into to play Ramona."

"Whether she was doing great things or bad things, she was very clear about what she wanted and what her goals were."

"And that she could do it on her own. Like, you never see a man in her life. There's men. But she was so self-sufficient."

She thinks this female focus in important.

"For me, who grew up with my sister sleeping in the same bed, and then went from one relationship to the other, playing that character, and having to be that independent and in charge, I was just like, 'God, this is so empowering.'"

"And they kind of took ownership of that. We've been watching men take advantage of women in movies a long time. And so it was a fun kind of ride to see the tables turn."

In the same interview, Lopez opened up about her relationship with Rodriguez.

"We're really alike in our drive, in our ambition. He's an athlete. He wanted to be the best. I'm the same way. I just want to be great at what I do. We're both like that. We're both super-hard workers. We're driven by our passions. And we have a tremendous amount of respect for each other."

Since Hustlers, J-Lo has faced a certain controversy.

After it was turned down by Rihanna, it's been confirmed Lopez is playing the coveted SuperBowl halftime show.

She's set to perform alongside Shakira.

"I feel that it's a great thing to have two Latina women in Miami headlining the Super Bowl, and what we could do with those 12 to 14 minutes to make people understand our worth and value in this country. I think it could be a really beautiful celebration," Lopez opened up.

"I understand people not wanting to do it."

"Everybody has to make their own choices. They have to feel good about what they're doing. I feel like it's an amazing platform and one of the biggest in the world to put out whatever message you want to put out there. Whatever message of love or — I don't want to give anything away — I think it's taking a chance to do it."

But the biggest revelation from the interview?

That J-Lo didn't get paid for her Hustlers starring role. "I do things because I love them. I didn't get paid a whole bunch of money for Hustlers. I did it for free and produced it. I bank on myself."

And it seems the critics agree!

Because as awards season approaches...

J-Lo has been getting much acclaim for her incredible Hustlers performance.

And the prize for Best Supporting Actress when straight to Lopez. We're hardly surprised.

And the star sure knew how to celebrate.

Immediately after posting this celebratory selfie, J-Lo received some more exciting news - she'd been nominated for a Golden Globe!

And the second celebration might be even better than the first.

Because this time, J-Lo went for a makeup-free video. You can't accuse her of over-editing in this one - she really is that hot. Don't believe us? Scroll on to learn about her routine for looking quite so hot at fifty.
20%